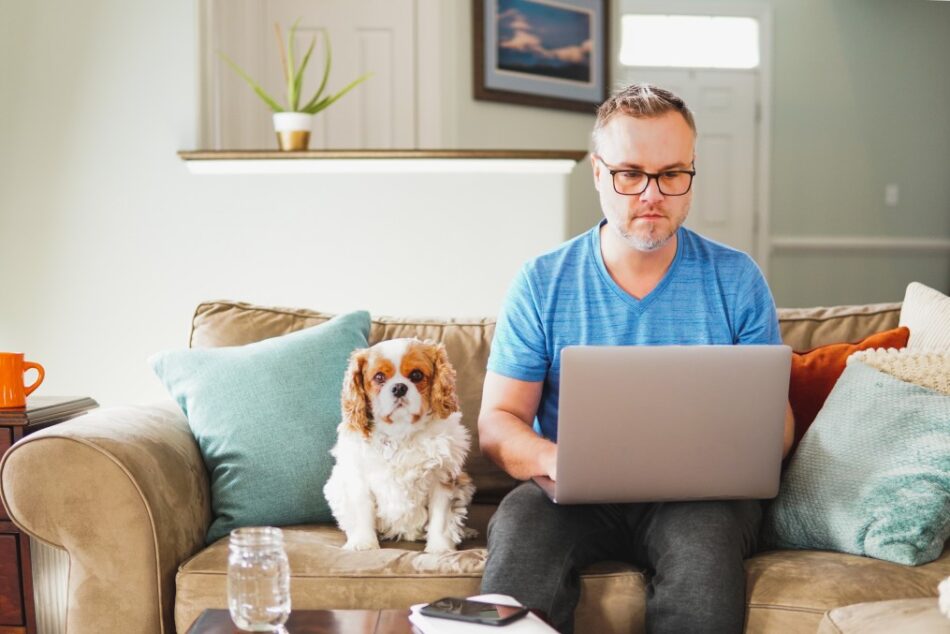 Working from home means less time at the water cooler and more time with pets. Photo by @5m3photos via Twenty20

At the start of 2020, fitness aggregator ClassPass had offices in 25 different markets. Their employees were working all over the globe – Amsterdam, Bangkok, Brazil, Dubai, and Tokyo, to name a few. ClassPass was riding the wave of the boutique fitness craze. People were eager to add variety in their regular fitness regimens, and ClassPass offered just that — an extensive catalogue of fitness and wellness experiences to choose. They quickly sped up towards global expansion. In 2018 they expanded into Asia. In 2019 they expanded into Europe. In all of 18 months, they went from four to 28 countries. In January 2020 they became the decade’s first tech “unicorn”, valued at over $1 billion  after receiving a massive round of series E funding for $295 million.

But in March 2021, because of the pandemic, their growth came to a screeching halt. They now have three active leases – two in Montana where they’re headquartered and one in San Francisco. They significantly reduced headcount since turning off their office lights last March. Over 50% of workers were furloughed or laid-off, with only 20% of those who had been furloughed brought back in summer 2020. With studio doors shut, they were receiving little to no revenue stream. ClassPass’ physical workplace was shifting.

Like many other companies, their employees have continued to work from home since the onset of the pandemic. What’s been lacking in company culture and social interactions, is made up for in working from the sofa, front stoop, and in the most comfortable leisurewear.

Ashley Bolitho, a Senior Manager of Employee Experience & Workplace Operations at ClassPass, explained that late last year they conducted a survey. They wanted to get a better understanding on how their employees envision working in the future since for better or for worse, they had become accustomed to working from their homes.

The pandemic has forced ClassPass, and many other businesses, to rethink the traditional landscape of the workplace. It has thrown the once hard and fast rules for work structure out the window. For most, gone are the days of the prescribed Monday through Friday office commute. In a survey conducted by Gartner, over 80% of company leaders plan to permit remote work after the pandemic.

Bolitho clarified that there is no blueprint or a one size fits all for companies on how best to return to the office as COVID-19 loosens its grip. Having a better pulse on their employees’ preferences for returning, ClassPass ultimately decided on a choose your own adventure model, where employees will enroll annually on how they want to return to the office. Options are fully remote, full time in the office, or a hybrid model where employees will be in office some days and remote the others.

“What used to work, no longer works,” said Bolitho. “We know people need some kind of connection and collaboration, and they are going to continue to need that. But now that folks have a sense of autonomy, we’re going to want to continue to give them that autonomy. That’s why we’re giving them options on how to return to the office”.

The streaming giant Spotify followed suit. Joining the ranks of other tech companies who announced they will shift to a flexible work model, Spotify will allow their 6,550 global employees not only to choose their preferred work mode, but have granted flexibility around location, choosing the city where they work. Spotify stated that their people live and work in different ways and the future of work of Spotify will be more flexible, effective and sustainable through their new model

With more companies leaning towards a hybrid approach, the question begs – how do you maintain an office culture, without, well, an office? Those face-to-face encounters in the kitchen when grabbing an afternoon pick me up will be slim, if not cease to exist. The last year has proved that human interaction is vital, and while digital gatherings help, they certainly cannot be substitutes.

“The idea is that at a certain cadence throughout the year, Shopify will support teams co-locating. We’re imaging a world where your team meets in a centralized location for a week of focused work and intention setting for the quarter or the year. ”

Batina always wanted to work at Shopify, but with headquarters in Ottawa, Canada, she wasn’t champing at the bit to move from her home in idyllic upstate New York. When she eventually joined in October 2020, the company had gone fully remote, or as they like to call it “digital by design”, helping in her assertion that it was the right time to join the team.

Katarina said that the CEO Tobias Lütke always tinkered to move the company in this direction, even prior to the pandemic. Because of the size and aspiring scale of the organization, they saw this as an organic and fortuitous time to permanently take the company fully remote. One reason they decided not to support a hybrid model, is they’re weary of the divide it will create among the two class citizenry of people who are in the office and people who are not. Also, it would just become a logistical nightmare.

“It’s not going to be an equitable environment if we did a hybrid model,” Batina said. “When everyone’s on a Zoom call, it’s great. But when half the room is and half, the room isn’t, it just creates this dual class structure that doesn’t really work well. We want to create an equal experience for everyone once it comes to a work environment.”

Regardless of the position companies take, each will present their own unique pros and cons. For Batina, she’s enjoying the ease and frequency she’s gained from remote work with the five employees she manages.

“We’re not in a fishbowl of a conference room or in a coffee shop with a lot of distraction,” said Batina. “You can have a really open conversation, where if you’re in the office, and you’re having emotional responses, you don’t need to worry about someone seeing you.”

Not all Silicon Valley execs are on board for fully remote or a flexible approach work. Netflix CEO Reed Hastings stated last year that he expects his employees to return to the office once the majority receive the vaccine. No matter what approach companies take, one hope remains. That the formal office dress code never comes back, and the days of pandemic sweat-centric wardrobe reigns supreme.