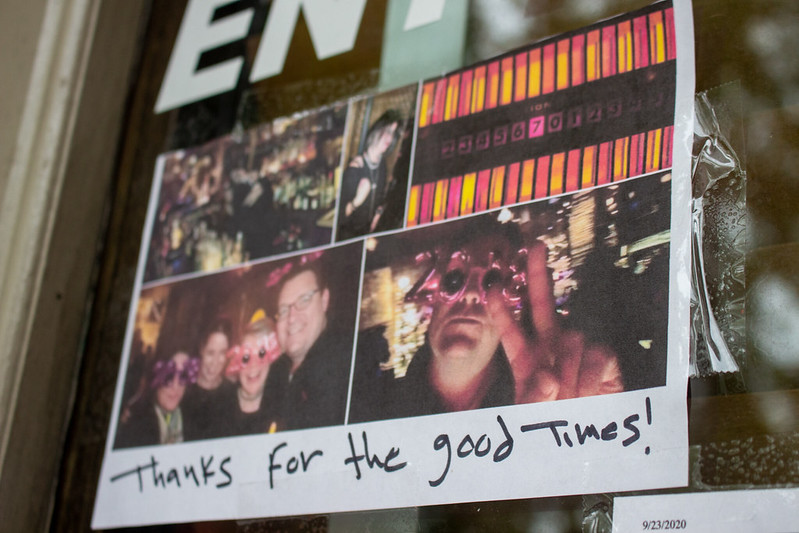 A sign hangs at Building on Bond, thanking patrons for the memories. Photo by Courtney Guarino

Small business owners, residents, and city council members gathered outside a boarded up restaurant in Boerum Hill,  yesterday, calling for affordability and stability for small businesses.

“We haven’t really seen the government step up the way that they need to step up,” Steve Levin, City Council member for District 33 in Brooklyn, said. “In April we had a call with all of our federal counterparts and the message was to hang on, by the end of May we should have a good stimulus package. Summer came and went, no stimulus package. Small businesses need help, landlords need help.” 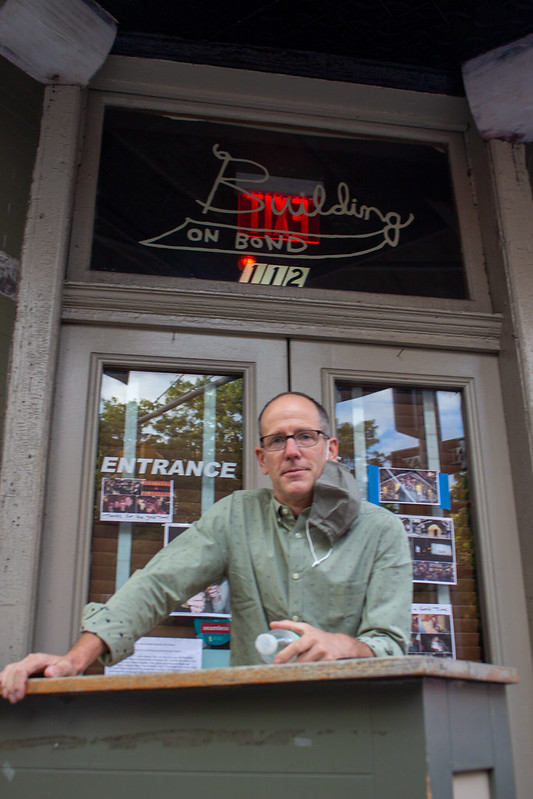 Phil Morgan, owner of Building on Bond, stands in front of the permanently closed restaurant. Photo by Courtney Guarino

Phil Morgan, owner of eatery Building on Bond, was forced, like many, to shut its doors due to the impact of COVID-19. Had Morgan been provided rent relief from his landlord, the restaurant would have celebrated their 13th anniversary this month. Throughout his speech, Morgan strained on the importance of building community through small businesses, and grieved at the loss of no longer being able to do so at his restaurant.

“We created a neighborhood joint, where people can hang out, get their coffee, get their lunch, take their business meeting, have a first date, get engaged,” Morgan said. “It was about being a part of the community. And when I said this to my landlord he said, ‘I don’t give a sh*t.’”

Many of Morgan’s colleagues are doing about 10-30% of their sales from last year, he said.  Prior to COVID-19, Morgan was pulling in about $150,000 in sales. And that was during a slow month. Using his colleagues’ percentages as a measure, had he been open now, the restaurant’s sales would be around $20,000. With a monthly lease of $25,000, that would leave him with $5,000. Like many other restaurants facing the same problem, it’s just is not enough cash to make it work and the landlords are unbendable. 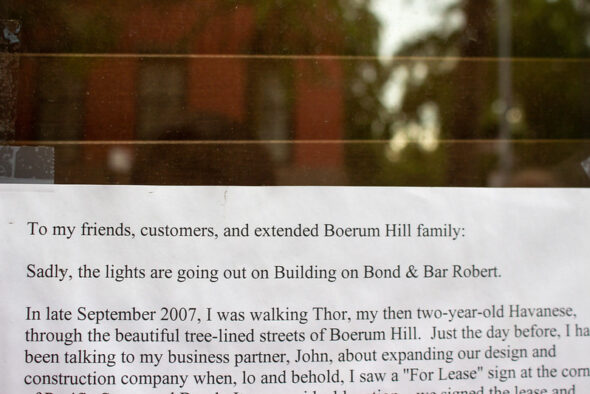 A letter of closure hangs on the window of Building on Bond. Photo by Courtney Guarino

“My landlord was not willing to do anything, all he wanted was rent and that just doesn’t work,” Morgan said. “I negotiated with him for five months and the only thing he was willing to do was either get all of his rent or I had to hand the lease back. It made no sense to open up with that lease so we had to shut down. The landlord would not come to the table.”

According to the U.S. Department of Labor, despite job growth totaling 3.8 million in the last 5 months, employment in food services and drinking is still down by 2.3 million since February. And as of September 23, about one-third of the city’s restaurants and more than one-half of its bars have closed.

Natasha Amott, owner of retail kitchenware store Whisk in Brooklyn, is one of the lucky small businesses to come out of COVID somewhat unscathed by rental fees. Her and her landlord have been handling rent on a month to month basis, with a large reduction given in March and April when the pandemic was at its worst.

But before we even knew the word COVID-19, Amott lost two Whisk locations due to an increase in rent and property taxes. In 2012, she paid $10,000 in property taxes on her Manhattan location. In just six  years, she saw over a 400% increase in property taxes to $54,000, forcing her to shut the doors. And that’s without even factoring in the cost of rent.

Her past experiences, compounded with the inequities on commercial rent and property taxes that COVID-19 has illuminated, forced her to take a look at the bigger picture.

“We need to look at new ways to imagine how businesses can start up,” Amott said. “We should be looking at changing how the standard lease works so we are not stuck with the property tax burdens so often. What I’m calling for is a reimagination on how we allow these contracts to develop.”

Megan Rickerson, owner of bar Someday Best, opened her doors July 2019 and has been able to stay afloat through the pandemic. At one point, she was doing it all– her chef taught her how to cook and  she made cocktails to keep overhead costs as low as possible. Rickerson would like to see relief for the landlords, too, in hopes of a trickle down effect on the tenants.

“My landlord is a decent person but he’s also saying he has no idea how long he can work with us because he is trying to stay afloat and survive,” said Rickerson. “He has a limit on his abilities. And I don’t know how long this is going to go for, so his abilities might run out next month.”