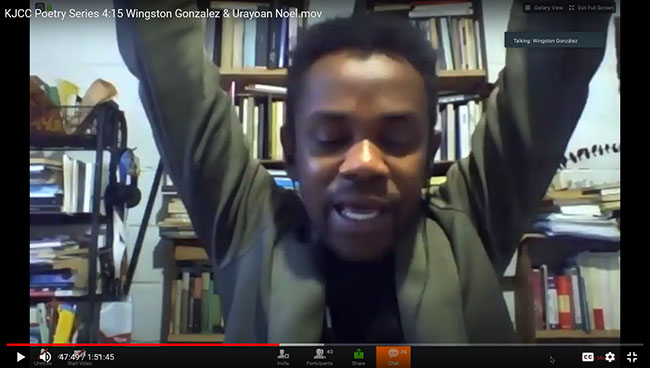 Guatemalan poet Wingston González was supposed to spend a week in New York City in mid-April, presenting his latest work at different venues. After the pandemic cancelled his trip, he started experimenting with something new: live poetry readings via Zoom.

Nor is he the only one. April is National Poetry Month, and many of the poets across the U.S. who would normally be reciting their verse at a cafe’s open mic night have moved their performances to online platforms. Bookstores and universities are hosting workshops and even running festivals through Facebook and Zoom. The Poetry Society of New York has added a feature that lets people book video calls with a poet.

González, however, was scheduled to come to New York for another reason. González is Garífuna, a minority group of about 600,000 individuals worldwide, who live mainly in Central America but have Afro-Caribbean origins. González had planned to read his poetry at a Garífuna festival in the Bronx. In a Zoom event hosted by King Juan Carlos Center at NYU, González talked about being raised speaking Garífuna with his mother and grandmother. He said that every morning, they would interpret their dreams from the night before. He writes in one of his poems:

His poetry is a natural for performance, whether live or on video. Sitting in his library at home, he read samples from his latest book, No Budu, Please, to an audience of about 40 people. His readings are dynamic and rhythmic; his translator, Urayoán Noel, compared the experience to a cross between a jam session and a mixtape. He draws out words, emphasizes certain syllables, raises or lowers the pitch of his voice based on who in the poem is speaking. Sometimes, he bursts into song.

Noel, a poet himself and a professor at NYU, said that they purposefully chose to read upbeat, high energy poems, partly as a way of cheering people up during the coronavirus, and partly because “if you read something that’s too subtle on Zoom, people are going to miss it,” said Noel. “They don’t have the kind of bodily cues, they don’t have the kind of immediacy of presence that you have in an in-person event. So you need to do stuff that’s, like, amped up a little more.”

Since González’s readings rely heavily on body language as well as spoken words, Zoom’s tiny squares of visibility present a challenge. However, González said in an interview that he also thinks that where Zoom limits his reach, it also expands it: the platform offers the chance to share his poetry with people on the other side of the world.

González said he started doing free-writing in notebooks when he was 15, to entertain friends at school. He described himself as a “failed rapper” or a “failed metalhead.” He infuses his poetry with elements from Garifuna music, Sci-Fi, anime, and Mayan mythology. He also incorporates the image of the “Kaiju,” a Japanese giant monster, and the spirit of those movies. The result, according to Noel, is both surreal and musical.

Noel said that one of González’s talents is his ability to take heavy topics like colonialism and turn them into pieces of art that are fun and engaging for the reader.

“It’s really difficult to do what he does,” said Noel, “to reflect those histories and those struggles, while also kind of re-mixing them in a way that’s totally fresh and totally his.”

While González’s poems are entertaining and filled with contemporary references, he doesn’t shy away from the ugliness of history. The Garífuna arrived in Central America after having been exiled by the British from the Island of St. Vincent in 1797, eventually forming communities in Guatemala, Honduras and Belize. González uses his poetry to introduce listeners to the history, language and worldview of the Garífuna, a people who have resisted against colonial powers for centuries, and for whom the effects of colonialism are still heavily felt today.

Because the works of Garífuna authors, poets and dramatists are little known in the U.S. González said he thinks a lot about how to transmit Garífuna culture to an outside audience. Noel said that he views González’s work as an “invitation to all of us” to “seek out” viewpoints of people whose art and culture are less likely to be translated, particularly that of indigenous groups.

González is currently working on putting together an anthology of his poems, while also taking time to do some writing. He says he’s focusing on what it means to be Garífuna today, especially in terms of the large diaspora that exists across Central America and in New York. The largest Garífuna population is thought to be in Honduras, which is home to anywhere between 98,000 and 250,000 Garífuna. Large Garífuna communities also exist in Guatemala, Belize and Nicaragua. Upward of 200,000 Garífuna live in New York City, mostly in the South Bronx.
González said he wants to make people aware of the place of Garífuna history within the greater history of the world. The quarantine, he said, is giving him plenty of time to think.

He believes that the arts can also help “shed light” on the way that the world is handling the coronavirus—perhaps not now, but for people in the future. “The arts are like a time capsule,” he said, adding that they “fix a marker” in a particular period of history.

He thinks the virus might even affect his own writing. “This is a moment sufficiently complicated,” he said, “to make oneself rethink everything he had been thinking he was going to write.”