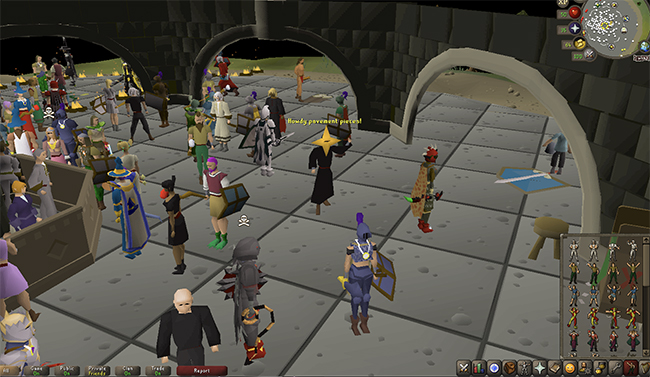 A scene from the online game, Old School RuneScape, which has seen a nearly 50% increase in players during the pandemic. (Jagex)

The town center was packed. Busier than ever, in fact. People were crowded together, chatting, walking, or hawking wares, decked out in armor and wizard robes while others brandished weapons and started fires.

This was not New York City — this was Gielinor, the imaginary world of the multiplayer fantasy role-playing game Old School RuneScape.

The online pastime is one of the many games that boomed in popularity over the last month due to coronavirus stay-at-home measures, seeing an increase of almost 50 percent  in the number of online players.

“I saw a huge number of like, actual new players,” said Branaldus, level 76, of the OSRS Tips clan.

The game — commonly referred to as OSRS — is a reboot of an older version of the nearly 20-year-old RuneScape. Despite polygonal graphics, blocky colors and simple “point and click” game mechanics, it enjoys more popularity than its more modern, separately maintained counterpart, RuneScape 3.

When the game opens, players are greeted by the sounds of the theme song, Scape Main. Soaring synthesized strings meet a trill of heavily-compressed software flute before the triumphant march of computerized trumpets.

Players say it’s this “old school” nature that gives it a soul.
“I joined because of corona. [I was] jobless,” said user Demyrockz, level 61, of Varrock, who wore plate armor with rainbow combat boots, and first played the game 10 years ago. “I don’t even have a goal. I’m just here to chill and feel nostalgic.”
“Quarantine gets boring,” chimed in JiXuan on the in-game chat, level 24.

Players say the social aspect of the game is part of its charm — and makes Gielinor an ideal stand-in for in-person interactions. While they have to dodge scammers, spammers, and bullies, they must also rely on the random generosity of strangers.

“I find the game both therapeutic and engaging due its combination of easy game mechanics, an open world and active community,” said Kevin Le, known in-game as Habibsradishes. “The game is especially enjoyable as a way to pass time and continue to engage with others during this current period of isolation.”

Le said the nostalgic, idealistic world of Old School RuneScape harkens back to a simpler time before coronavirus. It’s not the mechanics, but the spirit, that makes this game so relaxing —  like flipping through a yearbook, or visiting your childhood home.

Le put it best: “Some call it the perfect game.”