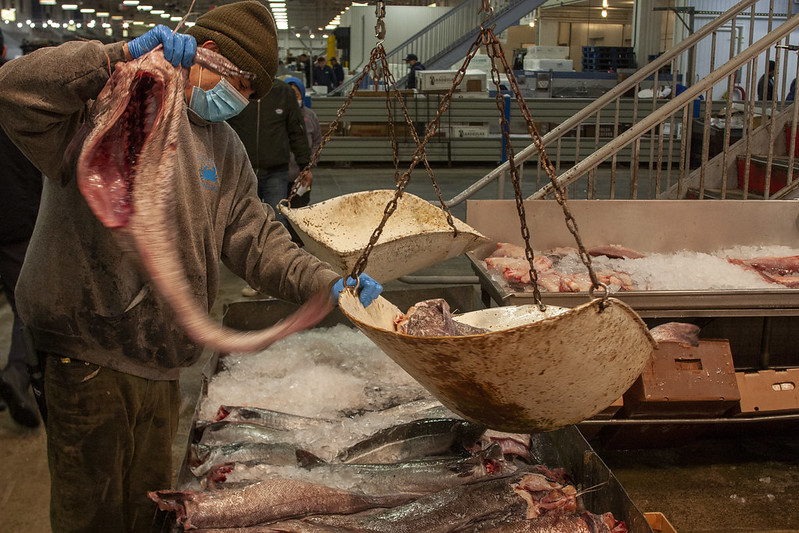 In the dead of a Monday night, while most of New York City sleeps, businesses are  just getting started in the Hunts Point neighborhood of the Bronx. This is when the New Fulton Fish Market, the second largest wholesale fish market in the world, begins its work week.

“This is meat and potatoes capitalism,” said Orion Lillyreed, vice president of Pacific Gold Seafood, one of the many wholesalers that operate at the market. “Working in the middle of the night, five days a week, four days a week. The hours alone will kill you.”

Lillyreed, like all of the vendors at the nearly two centuries-old market, is currently facing a threat unlike anything he’s seen in his 10  years as a wholesaler. Ever since the COVID-19 pandemic brought lockdowns in New York City and across the nation, wholesalers have faced an unprecedented loss of business. The collapse of the restaurant industry, a vital consumer of wholesale goods, has hit everyone hard. 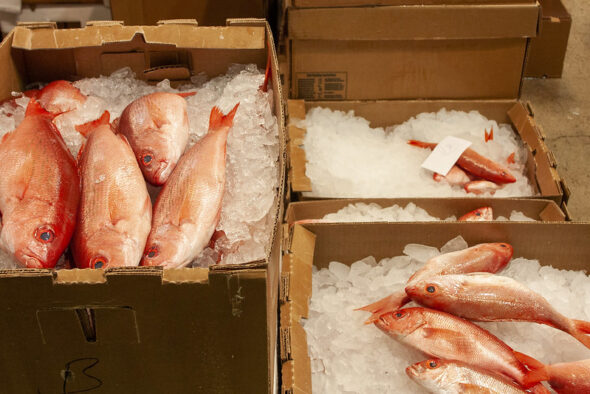 “We are doing 15-20% of the business that we would be doing prior to lockdown,” Lillyreed said.

“It’s not that people have stopped eating, but they’ve cut down on what they choose and where they go to buy it from significantly,” he said.

Wholesalers are an important link in the long supply chain that brings fish from the sea to the plate. Working directly with fishermen, these companies sell fresh seafood to a wide array of customers. 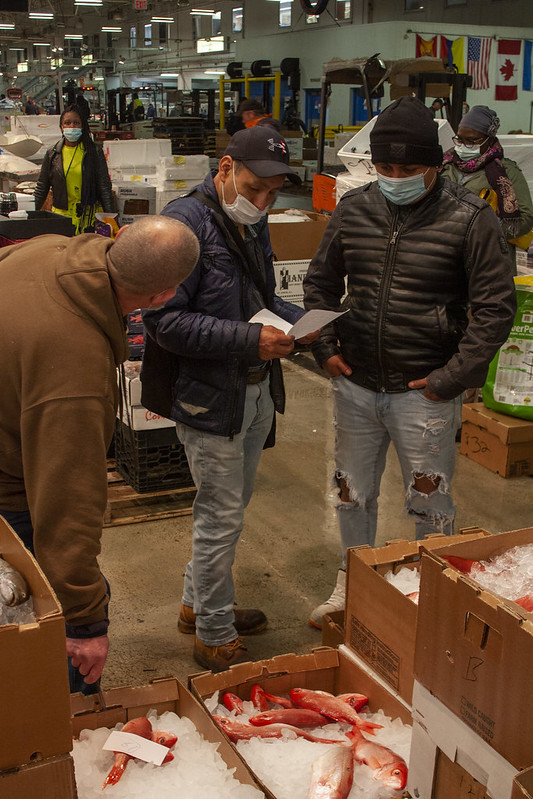 “You get it right off the boat,” said Jeremy Bernstein, manager at JMS Seasonal Seafood, another wholesaler. “We’ll get it and sell it to a retail store, a restaurant in the city, and then it goes to your stomach.”

The food industry’s demise has sent a shockwave all the way up this chain. Most restaurants buy their product from purveyors, middlemen that buy wholesale and proportion it. With no restaurants to sell to, purveyors and wholesalers are left reeling.

“As long as [the purveyors] stay in business, we’ll be ok,” said Lillyreed. “But they’re, of course, not paying us because their customers are not paying them.”

While wholesalers cope with their losses, they also take aim at a new opportunity: the consumer market. Buyers who would otherwise buy at grocery stores are showing an increased interest in other options. More families come to the fish market, even at such late hours, to rub elbows with the traditional clientele.

“We’ve adjusted,” Bernstein said. To help buoy revenue following the 75% losses suffered during the lockdown, JMS has opted a direct-to-consumer strategy. Their unit now hosts its own retail section, selling lobster tails and claws. They have also begun an online delivery service, available across the entire continental US.

Wholesalers are trying to use the allure of fresher food at cheaper prices than what one would find at a grocery store.

“In the supermarket it’s there for a week or two,” Bernstein said. “Going right to a fish market is obviously the best for the quality and the best for the price.” This adjustment has helped JMS Seafood retain its staff during the lockdown. 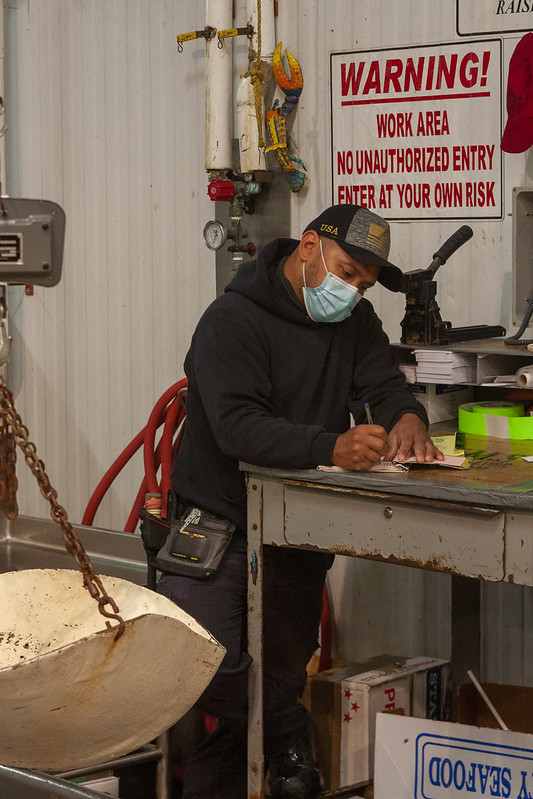 While the prospect of new business is a welcome sight, it does not come without its challenges. Pacific Gold has also been able to keep its staff, but foraying into the consumer world has not been easy.

“There’s a lack of education,” Lillyreed explained. “People don’t understand our product in comparison to what they see in a grocery store.”

Adjusting one’s business to the smaller scale of consumer goods is also a major complication.

“Trying to recoup the value there, to sell the product for what it’s worth, is a lot harder when you’re trying to do it a pound a time instead of 100 pounds a time for a wholesale business, he said.”

The New Fulton Fish Market has also made adjustments to help its vendors weather the lockdown. It’s website allows more direct-to-consumer sales, and its business hours have been reduced to 2-7am. But work on the ground is still old-school. At the market, orders are written in pen, fish are still weighed in metal baskets, and customers are expected to know a little more about what they are buying.

“You gotta be able to handle your fish yourself if you buy your fish here,” Lillyreed said. Pacific Gold only sells whole fish, no single cuts. “ That’s a turn-off to a lot of consumers. I don’t see that part changing.”

This reluctance to change goes both ways. “All these guys, all these companies here, are just bearing down waiting for better times,” he said. “They’re not adapting to a consumer market.”

Business still revolves around the quality and availability of their product, as opposed to the consistency desired by grocery stores and everyday consumers. 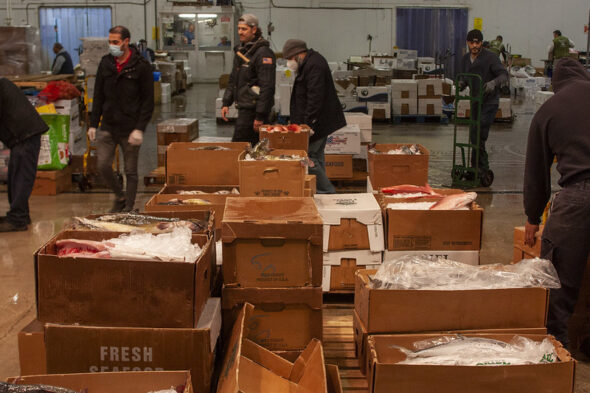 “Here you still have guys getting in boats, going out, catching fish in the natural world and bringing them to market,” Lilyreed said. The ability to even have something to sell depends on a myriad of factors, from cancelled deliveries to waters too dangerous to fish on. “Supermarket chains can’t deal with that.”

Hanging over everything is the reopening of the country, and a hope that life returns to normal. On June 3rd, most of New York State entered “Phase 2” of the New York Forward plan, the protocol for reopening the state following the March 22 lockdown. This phase allows for outdoor dining. New York City could reach Phase 2 as early as July, according to mayor Bill de Blasio.

“People are going to want to eat,” said Bernstein, noting that he already sees many more people without masks than before. “People aren’t going to be scared anymore. I think people right now are sick of it.”

Wholesalers are banking on a surge in demand as people are able to dine a little more freely.