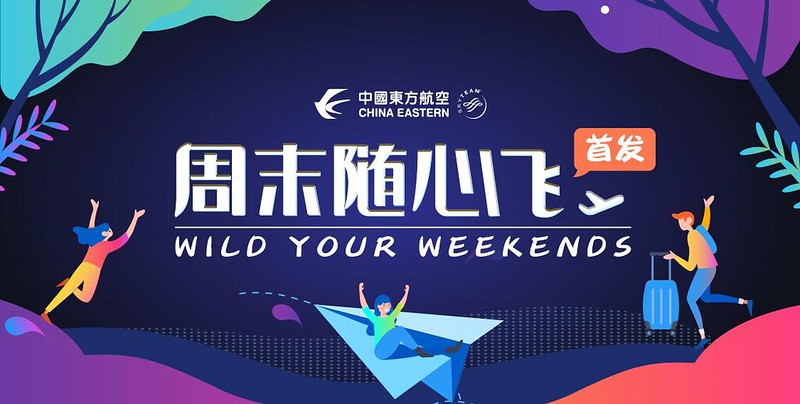 China Eastern Airlines launched a campaign, called “Wild Your Weekends,” to offer unlimited weekend trips by the end of 2020 for less than $500.

On June 18, Chonghe Zhong, a data analyst in Shanghai, rushed to open the China Eastern Airline app after work. It was the day of the “618 Shopping Festival,” a popular online shopping event in China, and the airline was trying to win over armies of customers with a promotion for an unlimited weekend travel pass. The app crashed once because of the unprecedented high traffic, but Zhong eventually scored his pass after refreshing multiple times.

The campaign, called “Wild Your Weekends,” offers passengers unlimited weekend trips throughout China by the end of 2020 for 3,322 yuan (approximately $473). Much like the unlimited “All You Can Jet” pass popularized by JetBlue in the U.S. in 2009, the promotion has created a lot of buzz, with the tag #WildYourWeekend trendy on Chinese social media.

China Eastern Airlines launched the campaign at a strategic time. The “618 Shopping Festival,” which falls on June 18 every year, is a key shopping day, promoted heavily by e-commerce platforms trying to boost their revenue. As the economic brunt of the Covid-19 pandemic still looms, this year’s 618 became an important gauge of Chinese consumer spending.

After travel plummeted earlier in the year, China Eastern Airline, as one of China’s three biggest carriers, had struggled to cover an astonishing amount of refunds. It reported a 3.93 billion yuan ($556 million) loss in the first quarter of 2020. The airline joined the e-commerce companies to drum up more excitement for air travel as most regions in China have reopened. The campaign, debuted on June 18, is limited to 100,000 passengers. As of June 29, the airline has sold out the passes and is expected to collect 332.2 million yuan ($47 million) in revenue.

“This is the best deal of the year,” said Zhong, who had plans of using the pass to visit home and travel.

Yet the lucrative deal did not persuade all travelers. Unlike Zhong, Yutong Zhao, a graduate student in Chengdu, passed on the deal, saying “it might not be worth the money.” “Flight tickets are already at ‘bok choy price’,” she said, referring to the cabbage that is prevalent and cheap in China. “I have to fly at least six times with China Eastern to earn back the face value.”

After the pandemic slashed the global air industry, prices on China’s domestic flight tickets crashed. A one-way ticket from Shenzhen, Hong Kong’s neighbor in mainland China, to Chengdu, a Southwest travel hub, was 20 yuan ($2.80) on March 2 with government subsidies, even cheaper than a pound of bok choy. The Civil Aviation Administration of China has provided subsidies to Chinese airlines that still operated during the pandemic and reduced the airport parking and air control fees. From January 23 to June 30, another funding scheme would reward each sole operator with 0.0528 yuan ($0.008) per seat kilometer.

There has been an uptick in airfare after the pandemic settled in most provinces, but it is still 30% down from last year as of June, China’s state media Xinhua reported.

The 618 deal stimulated China’s sagging airline market. As of June 24, the first batch of passengers have redeemed over 65,000 tickets through the campaign and embarked on their first trips during the three-day weekend celebrating the Dragon Boat Festival. Lhasa, in western China’s Tibet, became a popular travel destination. Passengers with the unlimited travel pass made up 90% of the travelers on a Chengdu-to-Lhasa flight on the first day of the three-day weekend, according to the airline.

“I have planned weekend trips to Chengdu to eat hotpot, to Canton to have dim sum, and to Sanya to have a seaside getaway,” Zhong said, after “being stranded in Shanghai for months.”

Zhong joined a discussion group on Wechat, which gathered more than 400 people, from travel enthusiasts and long-distance couples to college students, who have all bought the package. This voluntary gathering soon turned into a platform for finding travel buddies, planning out routes and seeking food recommendations.

Another regional airline, China Express, launched a copycat promotion days after offering its own unlimited travel package at 2,999 yuan ($429).

The idea of a prepaid fix-price all-you-can-fly pass is not new. Back in 2009, JetBlue launched the “All You Can Jet” pass, which cost $599 for unlimited international and domestic trips for a month to combat the headwind of the global recession. JetBlue called it “the most successful promotion in the company’s history” and reintroduced the scheme multiple times. China Eastern’s promotion, during an even worse economic freefall in 2020, is much bolder in terms of the price and scale.

Although the airline will rack up numerous costs actually flying all these customers, Yan Kong, an airline analyst, said China Eastern can still make a profit from the promotion because “Chinese travelers, realistically, cannot redeem that many flights.”

Despite the buzz of the campaign and a modest increase in flights and capacity, China’s airline industry–now solely relies on the domestic market– has a long road to recovery.

“The reopening of Beijing and Wuhan airports in April were two key signals in the stabilization and recovery of China’s airline industry,” said a report released by Ctrip, China’s largest online travel agency in June.

But Beijing has restricted outbound travel again after a dozen confirmed coronavirus cases were traced to a meat and vegetable wholesale market on June 11. Flightstats’s data has shown that 1,073 departing flights from Beijing’s two major airports were canceled over the last week.

“[There] is still great uncertainty in the time span and severity of the epidemic around the world, which may magnify the impact on or result in a delay in the recovery of travel demand,” China Eastern said.