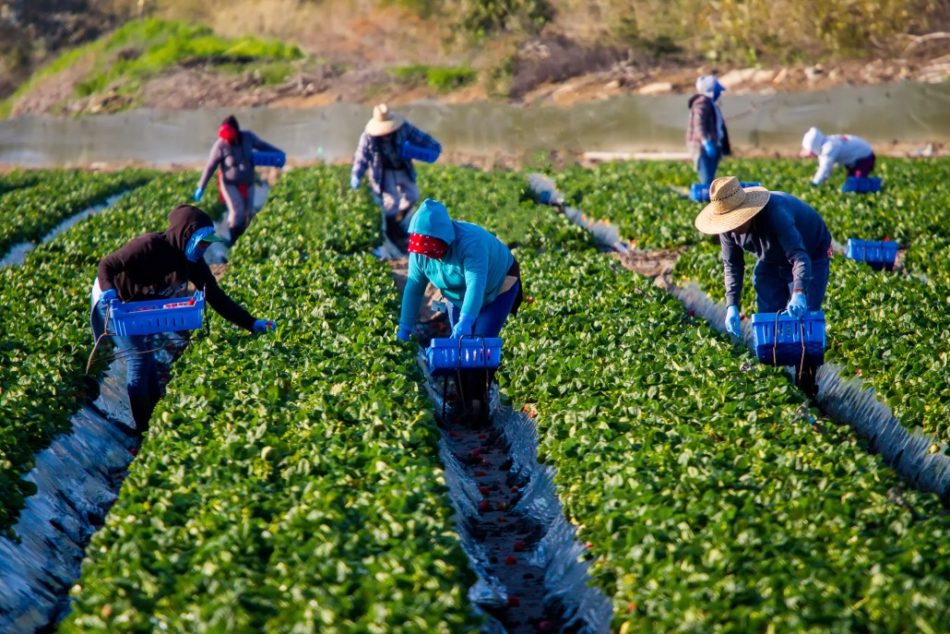 Driving along Interstate 5 in California, the vast farmland is the heart of America’s kitchen. Vegetables, fruits, and nuts grow in enormous fields throughout the state’s rural towns.

But when the novel coronavirus spread across the U.S., confirmed cases reached 3,894 in California. Governor Gavin Newsom last week ordered 40 million people to stay home except for essential employees.

Newsom added that farmworkers are essential.

“Workers reacted very strongly,” said Armando Elenes, secretary treasurer of United Farm Workers Union, Bakersfield. “We are getting paid minimum wage, we have no benefits, no healthcare, no nothing. We basically said, now we are essential? It doesn’t reflect that on our paycheck.”

Elenes said that farmworkers have to continue work, but benefits such as healthcare are not included in their employment.

“Even though these are the workers that are harvesting America’s produce, and the backbone of the food industry, they aren’t going to get any benefit, they have no safety net,” he said. “They are petrified of going to work because they might get sick and their families sick. And they are petrified of losing pay because they have no other recourse. Some workers are happy, but others are afraid.”

Nearly half of California’s farm workers have no health coverage. For the average farmworker, health insurance is not available to them. Agriculture companies do not typically provide health insurance and if they do there are high co-pays and deductibles. Undocumented farmworkers, who make up 75 percent of California’s agricultural industry, are not eligible to apply for insurance. 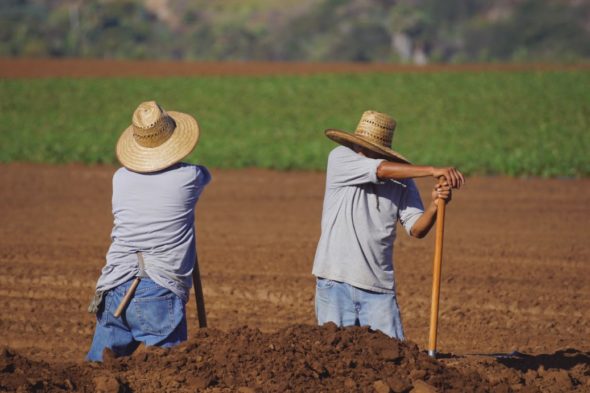 Farm workers cultivating the land and farming for food in San Diego, California Photo by @TonyTheTigersSon via Twenty20

This has caused farmworkers to be left without support during a global health crisis.

UFW conducted a poll of 277 farmworkers in California to see if companies were educating them on catching  the coronavirus. Ninety percent said that their employers were not

Elenes said that UFW is calling agriculture companies to increase the information given to their employees.

“We issued a call to action, to all growers in the agriculture industry asking them to step up,” he said. “Asking them to advise their employees of the best practices. Washing your hands, don’t touch your face, and if you’re sick, stay home.”

They urged growers to offer health benefits to employees and to increase paid sick leave for farmworkers who are ill.

“We asked them to provide paid sick time of up to 40 hours instead of just 24 hours. In case they are sick, they can stay home and not worry about losing pay,” he said. “We want to protect farm workers, and protect consumers.”

The union asked growers to lessen the requirements for farmworkers who need time off, but are afraid of being denied benefits.

“We asked the growers to stop asking for doctor’s notes. So workers feel more confident in using their sick pay,” he said. “And we asked that if a worker were to be found with the coronavirus, that they would be on paid administrative leave. Reenforcing that workers stay home, take care of themselves, and not spread the virus further.”

They sent the letter out to union and non-union companies in California. But the companies haven’t responded to the letter yet.

Hernan Hernandez of the California Farmworkers Foundation in Delano, said that educating workers about the virus goes beyond solely spreading information. Some people in his community do not follow health regulations because of their values.

“Some companies are following the CDC guidelines,” he said.” But an employer can tell you to do something, but does it translate into a behavior change? Sometimes it’s hard for us as a Hispanic culture, we like to eat together and share the same meals. It’s very tough for them to stop that. They need to know the severity of this virus and know how deadly it can be for them and in the families of their own sector.”

He said it is difficult changing behaviors in his community when there are news outlets broadcasting other information.

“We have been ramping up our efforts in the fields and making sure that we say that this is serious,” he said. “It doesn’t help that the Mexican president hasn’t taken the virus seriously himself. When they turn on the news, they see the president hugging and shaking hands at large events. It’s not helping us at all.”

He is worried that if there is an outbreak it will be hard to contain. But Hernandez is beginning an outreach program for farmworkers who need information.

“This week you will see a hotline number they can call, and applications for a COVID-19 fund relief,” he said. “We are going to start virtual medical constellations for farmworkers who suffer from chronic illnesses and respiratory illnesses. We will be releasing all of that information online.”

United Farm Workers is also employing outreach methods to inform farmworkers. From Facebook to visiting farms while being socially distant, they are educating farmworkers on the impact of coronavirus.

Elenes  said that the pandemic is a reminder that America needs to support people who grow its food. Including health plans, paid sick days, and access to education.

“We damn better care about what’s happening with our farmworkers, if we want to protect the food supply,” he said. “We have to give workers the protection they need. We have to figure out how to deal with their healthcare. We need to take proactive steps on how to protect themselves and work safely.”