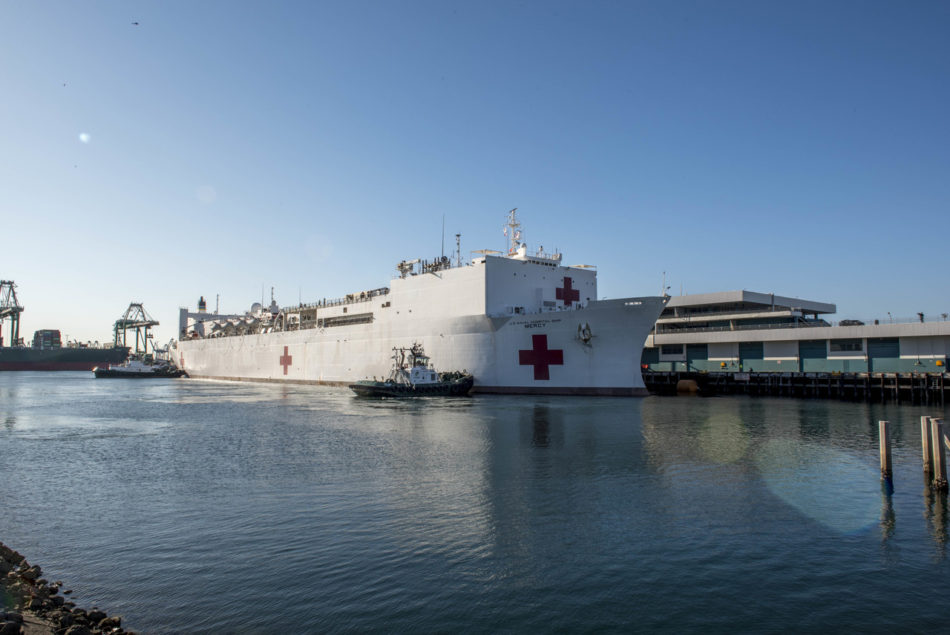 After a long night shift and a measly four hours of sleep, Hospital Corpsman Smith was woken up Wednesday by his supervisor on the USNS Mercy.

“Smith, you have to go down to ward 14-15,” said the supervisor as he dragged Smith out of his wooden bunk bed.

Minutes later, Smith found himself sitting in the ship’s isolation ward with a dozen other crew members, all seated 10 feet apart.

Smith — whose real name is being withheld due to concerns over losing his job — was ordered to report to an isolation ward on a deck below. He had been in close contact with Sydney Thayer, a fellow hospital corpsman who had just tested positive for coronavirus.

“It’s not surprising people got it because this plan is just not thought out carefully,” Smith said in a recent interview with Pavement Pieces. “It’s just a breeding pool for COVID.”

By 2 a.m. on Thursday, Smith and several other crew members who had come in close contact with Thayer were removed from the ship.

The USNS Mercy — touted by President Trump late last month as a safe haven for non-coronavirus patients — now has at least one confirmed case of COVID-19, officials said last week.

The ship docked in Los Angeles March 27 to ease the burden on local hospitals overwhelmed by coronavirus cases.

Four days later, Capt. John R. Rotruck sent a memo to Smith and other crew members informing them that a crew member — whose name has not been released — had been removed from the ship and later tested positive for the disease, according to an internal email obtained by Pavement Pieces.

“One person, removed from the ship early in the mission because of contact with a known COVID-19 person on shore, later developed symptoms and tested positive for COVID-19,” Rotruck wrote. “At the time of helicopter transport off the ship, he was feeling well and at very low risk of transmission.”

Mercy’s sister ship, the USNS Comfort, is currently docked at New York City and reported a positive case of COVID-19 April 6 — the same day it announced it would begin treating coronavirus patients onboard. So far, officials have not said whether Mercy will do the same.

“They’re doing better as they are willing to test more, but everyone feels like COVID is pretty rampant on the ship,” Smith said.

“The screening was (them) asking a few questions — (but) it doesn’t matter what your answers to it was,” he added. “They will not test you because there was not enough testing supplies, so there is no way to guarantee there was no COVID on the ship… so by having so many people isolated onto the ship, you’re gonna spread COVID.”

Navy Public Affairs Officer Lt. Joseph Pfaff said in a statement that the officials are taking precautions to ensure the health and safety of everyone onboard.

Rotruck acknowledged in the March 31 memo that “some of our shipmates are concerned about how we have handled folks who may have had an exposure to someone who is COVID positive.”

“If you have questions or concerns, you are welcome to ask your chain of command or or reply to me directly,” he continued. “Bottom line, your health and safety are my top concern as we move forward with executing the mission. I will use any means available to me to ensure we remain COVID free.”