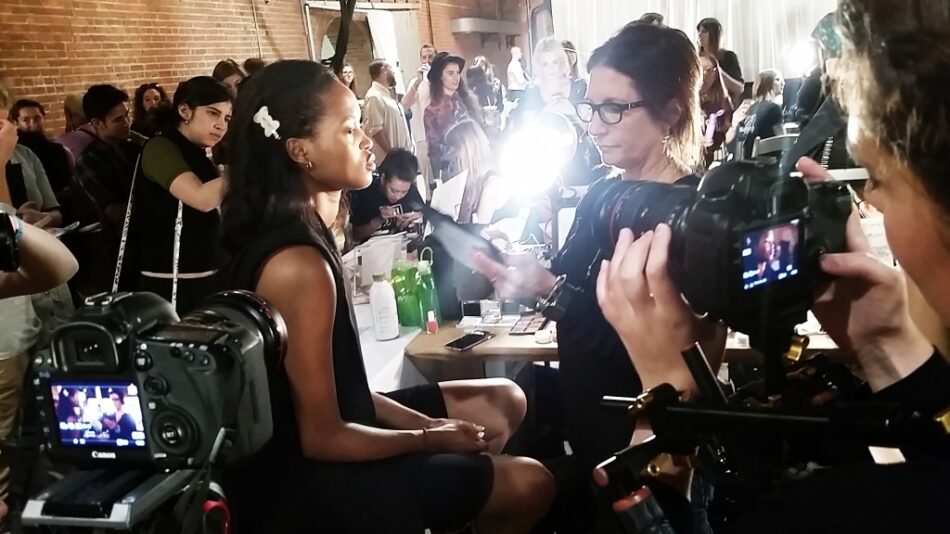 On Thursday, September 17th, the final day of an abbreviated New York Fashion Week as a result of Covid-19, Charles Sykes, an almost 30-year veteran Fashion Week photographer, drove his car, oddly, away from Manhattan, to the wooded town of Westport, Connecticut. He had been sent by the Associated Press to cover a show by Christian Siriano — a luxury womenswear brand, hosting one of the few in-person events this season — at the designer’s own home.

For photographers, Fashion Week is usually a chance to capture images that establish and advance their careers, boost yearly earnings, and rub elbows with friends and competitors — often indistinguishable — from around the world. It is chaotic, exhausting, and inspiring. But not this year.

In late August, New York Governor Andrew Cuomo announced that Fashion Week would be held but because of the virus limited the number of people who could attend outdoor events to 50. Indoor events were reduced to half capacity, no spectators.

Photographers, hampered by safety orders, minimal programming, and travel restrictions to New York State, largely didn’t go. For those who did, there was little to cover. In a normal year, Sykes shoots anywhere from 15 to 30 shows during Fashion Week. This season, it was only Siriano.

“As I approached, I could tell it was the house because there were a bunch of SUVs in front and security,” he said. “From the main road you had to walk up a gravel path. Several people checked me in, made sure who I was, asked who I was shooting for.”

He furnished his credentials and joined a handful of press, some familiar, who he hadn’t seen in six months. Another photographer, Simbarashe Cha, was there on assignment for The New York Times.

“Mr. Siriano was super accommodating and his staff made everyone feel welcome and at home,” Cha said. “Which I can assure you is not a thing that happens often in a normal fashion week season.”

Missing was the usual crush of photographers, standing on top of each other, vying for angles and room to work. Sykes, familiar with the Fashion Week melee, also saw advantages to the arrangement.

“The way the show was set up, being in someone’s backyard, you weren’t on top of anybody,” he said. “You actually had a little more freedom. Normally you can’t move, you’re stuck in one spot during the show. Here, because there’s room, I could go to a couple different angles, so it actually, ironically, gave me more freedom than I would normally have.”

Outside of Spring Studios in Manhattan, where a small number of in-person shows were held, Andrew H. Walker, a staff photographer with Shutterstock, experienced the other side of this year’s limitations: a scrum, jockeying for a few photos.

“This year was definitely the least exciting, and the only thing I got to shoot was street fashion,” he said. Walker has covered New York Fashion Week since 2008, and will normally shoot three or four shows in a day. “Shooting street style was more challenging than I anticipated, as there were so many other photographers trying to get the same shots.”

Despite the circumstances, Walker’s photographs look almost indistinguishable from a normal season’s: attractive, fashionable people striking poses on sidewalks. The only difference is the ubiquitous mask.

At Siriano’s intimate show, however, the designer’s lush backyard replaced the standard studio runway, and in that setting, the photographs gained a novel, whimsical air.

“The landscape of what Fashion Week looks like is different for the first time ever,” said Samantha Adler, Vogue.com’s Visual Director. “You’re photographing a different thing.”

Cha captured a dreamlike photograph of model Coco Rocha wearing a bushy, blood-red, taffeta gown, strutting through the grass before a blurred ensemble of masked guests. Sykes later caught Rocha, wading backwards, on a whim, into Siriano’s pool, the gown flowing after her like a soggy rose.

For photographers who missed these scenes, the harm is threefold. During fashion week, Cha explained, the images that a photographer captures not only builds their portfolio but attracts potential clients.

“In many seasons, too many to count, the photos that I produced at Fashion Week led to most of the commissions I’m granted throughout the year,” he said.

The missed opportunity is also a significant earnings loss. Sara Kerens, who has shot for Siriano since 2012, explained how limited programming financially crippled photographers — especially freelancers.

“New York Fashion Week usually comes with endless fashion events that are money makers,” she said. “To have this loss of income is a big deal. It was a hit for me.”

With fashion and entertainment largely shut down because of the pandemic, many photographers, with nothing and no one to capture, have been anxiously waiting for things to pick up. For Sykes, the Siriano show was his first assignment since March.

“I don’t know when [entertainment is] coming back, and when it does come back, I don’t know what it’ll look like,” he said. “I imagine everything will be scaled down, just like this Fashion Week.”

After the show, Sykes walked back to his car and quickly submitted his photos to the Associated Press. They’ve since appeared in countless magazines, journals, and newspapers across the world.

The drive back to New Jersey took almost two hours. Traffic was horrible. But, he thought, maybe this is a good sign. The world is becoming full again.