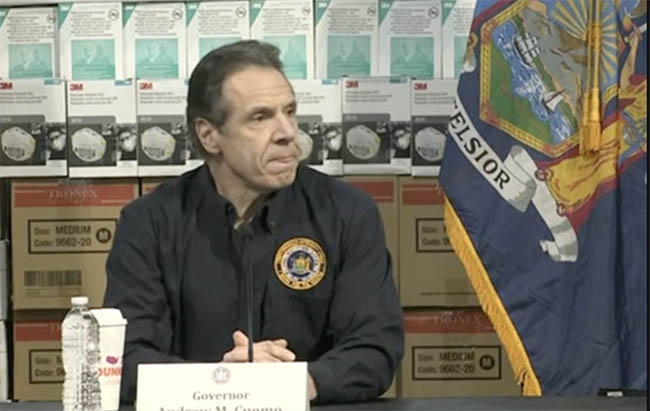 He said the curve is not flattening despite the virtual lock down of the state, with cases doubling every three days, he said. The state has more than 25,000 coronavirus cases, about ten times more than any other state. About 15,000 of those cases are in New York City.  The rate of hospitalization is 23 percent.

“If more ventilators aren’t sent within weeks, you pick the 26,000 people who are going to die,” he said.

He  wants President Donald Trump to  act with more urgency,  as his state is the epicenter of the virus in the United States.

“The President said it’s a war. It is a war. Well then act like it’s a war,” Cuomo said.

Trump said that the federal government is doing a “tremendous job”  and blames Cuomo for not ordering ventilators years ago. He has said that the country is ready to transition away from social distancing and get back to work despite more Americans getting sick and dying of the virus.  He wants Americans back to work by Easter.

Speaking from the Javits Center, which will convert its showroom floor into New York’s first overflow hospital for COVID-19 patients this week, Cuomo thanked the Army Corps of Engineers and the staff members at the convention center for their quick work in setting up the makeshift hospital before  announcing the news of the dramatic increase.

Forecasters, who once described the spread of the virus a freight train, are now calling it a bullet train, Cuomo said.

Now the concern at hand, he said,  is where the number of cases of infections will apex, or be at their highest.

“We are exercising all options as aggressively as we can because they project the apex to approximately be 14-21 days away,” Cuomo said. “We are doing everything we can on every level. We have increased testing to the highest level in the United States and highest per capita level on the globe. No one is testing more than we are testing.”

Hydroxychloroquine and zithromax have emerged as potential lifesavers for coronavirus patients as the two medications used together can fight against severe acute respiratory syndrome coronaviruses, according to  CNN . Cuomo also wants to implement DOH Plasma Injections, which will involve taking plasma from people that are infected and have the antibodies, and putting the plasma into the people who are still severely struggling with the disease. This will also help with antibody testing, a detailed part of his plan for increased testing. It will allow people to have their blood tested to see if they have antibodies for the coronavirus, which means they might have been infected but never knew it.

“If you had the coronavirus and resolved, you now have immunity to the virus. For some period of time, most experts suggest it’s a significant amount of time,” Cuomo said. “These would be very important things for us to know because we have health care workers that could return to work.”

Cuomo said this biggest concern in making sure that hospitals are equipped and have staff.  He said he is prepared to do, and use whatever resources are available to him.

“Beds without staff are virtually useless,” Cuomo said. “Hospitals must now increase the number of beds by 50%, with the goal of trying to increase it by 100%. I have no problem using the dormitories all across our state campuses. I’m speaking to hotel owners about taking over their hotels to put patients in. I will turn this state upside down to get the number of beds we need.”