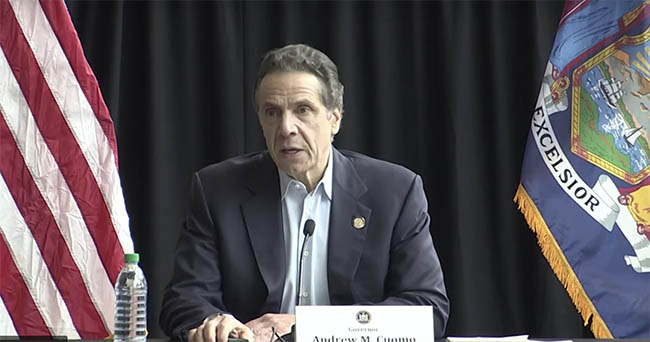 Cuomo said at today’s press conference that the two systems, which include the greater New York private voluntary hospitals and the public hospitals, need to work together to transfer and distribute the overload.

“I just had a meeting with the entire statewide healthcare establishment, Cuomo said. “And the entire healthcare system will coordinate to work as one for the first time in decades.”

Cuomo pleaded for a national response to help with New York State’s coronavirus crisis by undertaking a balancing strategy within the healthcare system. He said such action of distributing the load among public hospitals will be done “immediately, on a daily basis.”

New York has been hit the worst. The outbreak has infected more than 60,000 people in the state as of Monday. Among them, at least 1,218 people have died, over 9000 people are currently hospitalized and 2352 ICU patients.

Earlier today, Cuomo welcomed the arrival of The USNS Comfort Navy hospital ship that will help New York hospitals with the soaring numbers of coronavirus patients.

Cuomo said that the hospital will provide roughly 1,000 beds and 1,200 personnel to New York and will be used to treat patients that don’t have COVID-19.

NYC also built an emergency field hospital in Central Park as the death toll climbs to over 1,000.

As New York approaches the apex of the crisis, Cuomo said that states should be building up stockpiles.

He also responded to President Trump’s accusation of supplies “going out the back door”, in New York City hospitals, stating that there was no evidence of this and that New York has been building up stockpiles in a warehouse in New Jersey.

“If you are not preparing for the apex, you are missing the entire point of the operation,” he said. “We’ve been behind this virus from day one”.

New York is still scrambling to obtain medical supplies, especially with the prices of ventilators rose to over $50,000, he said.

Cuomo also agreed with President Trump and said, “this is a war.”

“The front-line battle is our health care system,” Cuomo said. “And our soldiers are our health professionals.”

“Whether it’s Detroit, it’s New Orleans, it will work its way across the country,” he said.