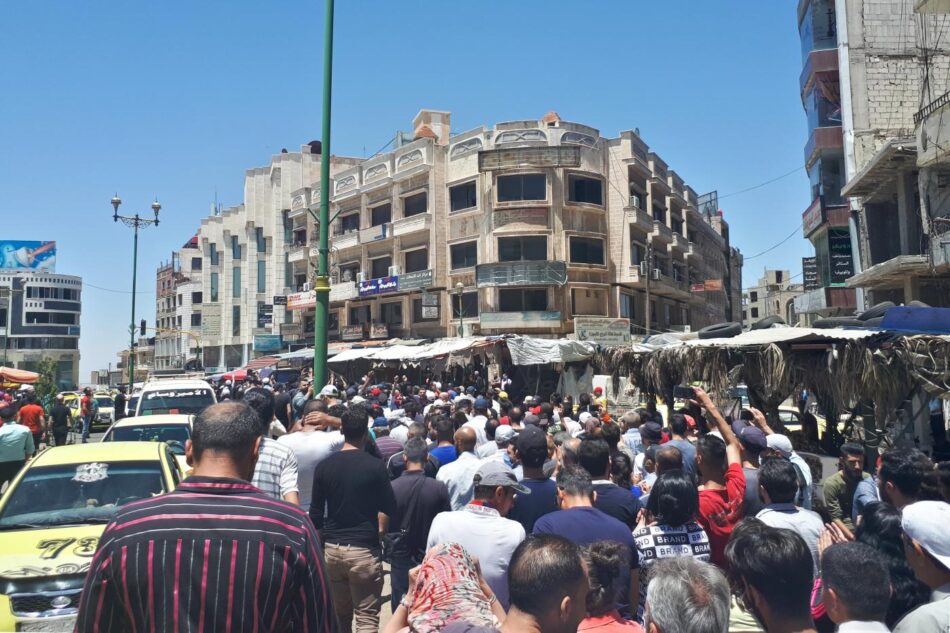 In Syria, which is in the final stages of a nine year civil war, the coronavirus is creating more pain as it spreads through a country in a deep economic crisis.

Despite health leaders advice to social distance to fight the pandemic, Syrians citizens are protesting against the country’s economic crisis and sanctions.

“The arrival of coronavirus is problematic for all countries,” said Christian Thuselt, lecturer of Middle East Politics at the Department of Political Science at the Friedrich Alexander University Erlangen Nuremberg. “Now the virus is spreading to the weaker states. In Syria, the economy is in shambles, millions have fled, nine million Syrians suffer from malnutrition That makes them more vulnerable.”

Hundreds of protestors demanding government action during the country’s economic crisis recently marched on the streets of Sweidaa, a city in the south of Syria.  But protests are erupting all over the country.

During the past 36 hours the cities of Damascus & Idlib in #Syria have witnessed rallies against poverty, unemployment & economic difficulties. Demonstrators are demanding Assad step down in order to end the war & bring an end to meddling by #Iran & Russia in their country. pic.twitter.com/pEkDKPGcDc

The civil war has killed more than 380,000 people and displaced millions since it began in 2011. The war started to crush anti-regime protests.

The coronavirus has  furthered the economic collapse of Syria. Food prices have more than doubled and now 7.9 million people are considered food insecure, according to the World Food Programme., The Syrian pound on the parallel market fell 50% and the minimum wage  now equals $26 a month. Eighty percent of the population is living in poverty.

“They’re literally risking their lives to go into the streets . . . [showing] just how desperate people have become,” Mona Yacoubian, senior adviser at the United States Institute of Peace told the Financial Times.

Bakeries are closing, doctors are closing, shops are closing, businesses are closing. Millions of parents aren’t able to put food on the table for their kids. They can’t buy food or milk 4 their babies. Some people are offering to sell their organs so they can help their families

Syria’s President Bashar al- Assad blames the economic situation on western sanctions. In 2011 through Executive Order 13582, the U.S. imposed sanctions on Syria’s government, prohibiting U.S. individuals to export or to sell services to Syria, like petroleum products. The sanctions were intended to deprive the regime of resources needed to as it brutally clamped down on citizens demanding change. The European Union followed a similar path and extended its sanctions against the Syrian regime.

The Syrian government won the the civil war with the help of countries like Russia and Iran ,but the war led to the destruction of 70% of the country’s economy and infrastructure, including medical facilities.

“Our hospitals are not provided with respiratory support devices or enough doctors,” said Mohammed, who works at a public hospital in Aleppo and did not want to give his full name. “Hospitals are good to handle a lot, but not in large numbers, like a pandemic this big. In my city, for example, we have only something like four ventilators, and they are most likely occupied.”

Syrians on Facebook groups offering to donate portions of their scarce medication. “No more medicine of any type available, even aspirin and cetamol were cut”
“I just had a thyroid cyst removed and I can’t stay without thyroxine and it’s also cut”
“I am on the last bottle” pic.twitter.com/PdSxEXa8PD

Thuselt said medicine is a prestigious profession and many doctors and medical students fled because of the war.

“I believe that the number is up to 70% of the medical staff has fled Syria, and so did students,” he said.“They are usually privately financed and their families do everything to take them out of Syria.”

According to World O’ Meter, Syria has 144 coronavirus cases and has registered only nine deaths.

“We also had some mobilization on Facebook groups,” he said. “The government established a curfew, so we aren’t allowed to leave the house after 6 p.m. on weekdays and on weekends after 12 p.m.,” Mohammed said.

Thuselt doesn’t believe they are accurate.

“There’s one thing that they [the government] won’t admit, it is defeat,” he said “They act as if the country is perfect, everything is just perfect. A good example was when Homs was under siege and Syrian state television, brought up peaceful pictures of Homs. They are bad at admitting that they are being defeated.”