Doctor uses social media to give advice and hope 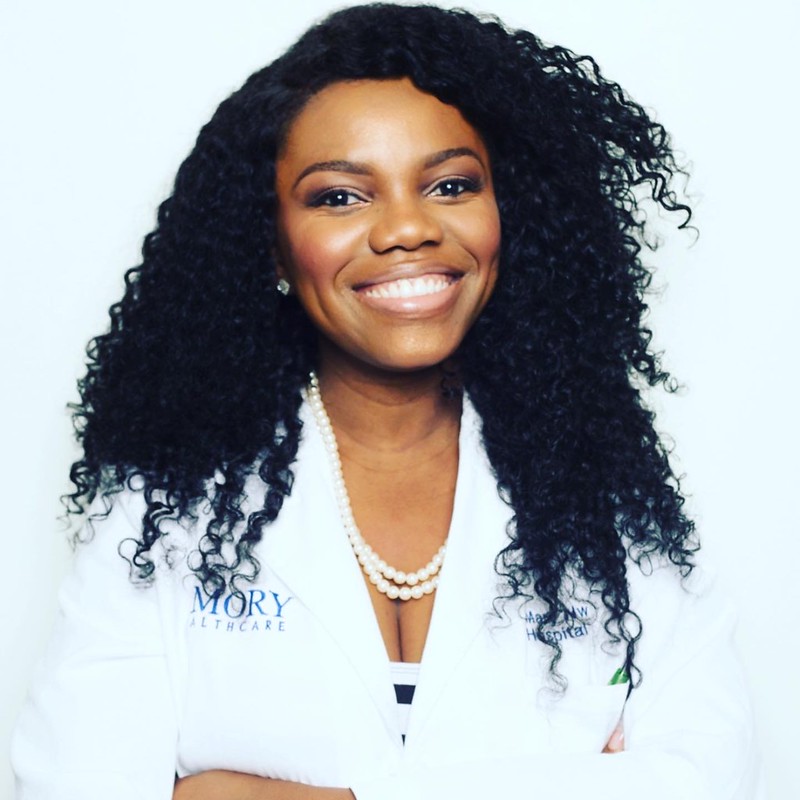 Mary Nwoke, an internal medicine specialist in Georgia, is one of many healthcare workers helping to fight the COVID-19 pandemic, as the state reopens. Photo by Mary Nwoke

On April 20, Governor Brian Kemp announced the reopening of Georgia and its businesses three very short weeks after ordering a state lockdown. Hair salons, bowling alleys, massage parlors, and tattoo shops were at the top of the list of places opening their doors- leaving many deeply troubled.  When Dr. Mary Nwoke, an internal medicine specialist in Atlanta heard the news, she took to social media to voice her thoughts and concerns on video.

One video turned into two, two into three, marking the beginning of “Diary of A Happy Doc.”

The name for the diary comes from the positive energy that she brings to work everyday, which many of her patients and colleagues quickly notice.

In 2013, while working at the homecare facility that she co-founded with a colleague, she met a woman who had a profound effect on her, and the way she approaches working and interacting with her patients.

“When patients talk to me, I hear them. I was working with this lady and she was about 93 years old. She was recently diagnosed with metastatic cancer,” Nwoke said.  “I don’t know why I did my white coat the way I did, but I put a smiley face right on top of my name. I was sitting in the physician’s office and one of the nurses came knocking on the door and said,  ‘Hey, miss- so and so wants to talk to you. She couldn’t say your name, but she said, ‘you know that doctor with the big smile?’”

It was only a brief interaction, but Nwoke managed to put one last smile on the dying woman’s face.  From then on, she was inspired to adopt a special title, Chief Happiness Officer.

“She told me that the smile she saw blessed her once I opened the door that morning”, Nwoke said.It didn’t really matter what I had to tell her, but she was ready to meet Jesus. She said, ‘Babygirl, you just keep smiling and making people happy.’” “From that point on, I said that was my job.”

Georgia saw its first two COVID-19 cases on March 2and Nwoke and her team began preparing for the cases to inevitably come.  A few weeks later,  Nwoke worked a seven night shift.  She started out with four COVID-19 patients and by the end of the week, she had 32. One patient died. This tragedy laid the groundwork for Nwoke’s diary.

“I’m thinking about my first death and I was posting. I started realizing that talking about what I’m going through is actually therapy for me,”  Nwoke said. “I’m not a journalist or into journal writing. I’m more into music and the arts. I’m a creative who loves photography. It was not just therapy for me, but it was so important for my people and my community.”

Little did she know, she was about to encounter another life-changing COVID-19 case that would further inspire her diary, her own positive case, which she contracted during that seven night shift. Coincidentally the week before contracting the disease, she had been discussing holistic medicine with fellow doctors and friends, and sprung into action.

“I had all the classic symptoms that my patients had and I started looking at how to prepare myself and my immune system for what was to come. I didn’t die because my body’s defense mechanism became better than what it was prior to working that shift.”

She quarantined for two weeks, careful to not get her husband and young son sick. From her bed, she continued her “therapy” and developed #TestimonyTuesdays, and  created more colorful and engaging graphic art on Instagram. 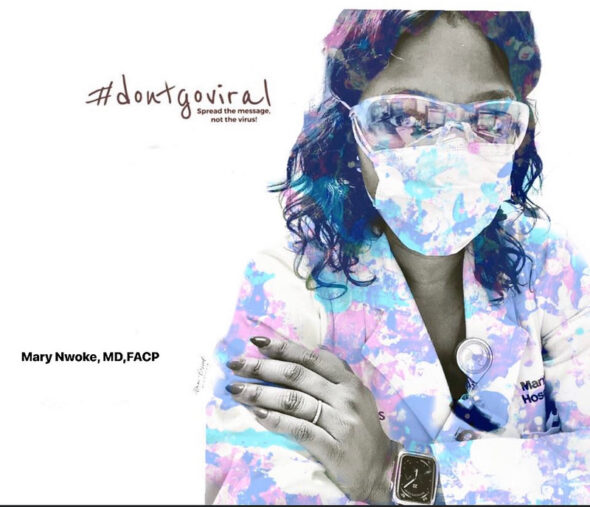 As she helps fight the pandemic in Georgia, creating art has been a source of therapy for Dr. Mary Nwoke.
Photo by Mary Nwoke

She also cut off all COVID-19 related news, which she credits in aiding her recovery.

“I had to sit in quarantine for 14 days and I realized that as all of this is happening on CNN and NBC, and social media…there was a lot of bad news,”she said. “Not only that, but it was important for me to cut that off and to start looking for good news. I knew as a physician that we had discharges and people did get better. We had a lot of deaths, but let me start glorifying the good and showcasing the testimonies.”

In her videos, she can be found sitting at her desk snacking on pretzels or whatever crunchy snack is nearby, as she talks up close and personal to the camera. She talks facts and statistics, gives advice on how to protect yourself mentally, emotionally, and spiritually, while of course,  sprinkling in much needed humor. On occasion, her videos come with Snapchat characters dancing in the corner, fun text, and filters- all in the name of providing a smile.

She hopes that the information she is giving as a trusted source will help her family and friends grasp the seriousness of the virus and stay home- despite what elected officials are saying.

“I said to myself that if I want to meet my family, community, and my friends alive and well on the other side of this pandemic, I better start speaking,” she said.“I don’t know who is going to catch on, but I need to start delivering the facts. I need to be on top of studies, be on conference calls, and have up to date information. This is not just for me, it’s beyond me.”

It’s been two full weeks since Georgia has reopened and as of this week, there are 34,002 confirmed cases, and 1,444 deaths. According to the Institute for Health Metrics and Evaluation, a  model similar to the one used by the White House, the death toll in Georgia could be high as 5,000 by August.

These numbers are alarming but Nwoke is fully prepared to do whatever is necessary to save the lives of Georgians,video diaries and all.

“I will always be a physician and patient advocate,” Nwoke said. “I love what I do.”