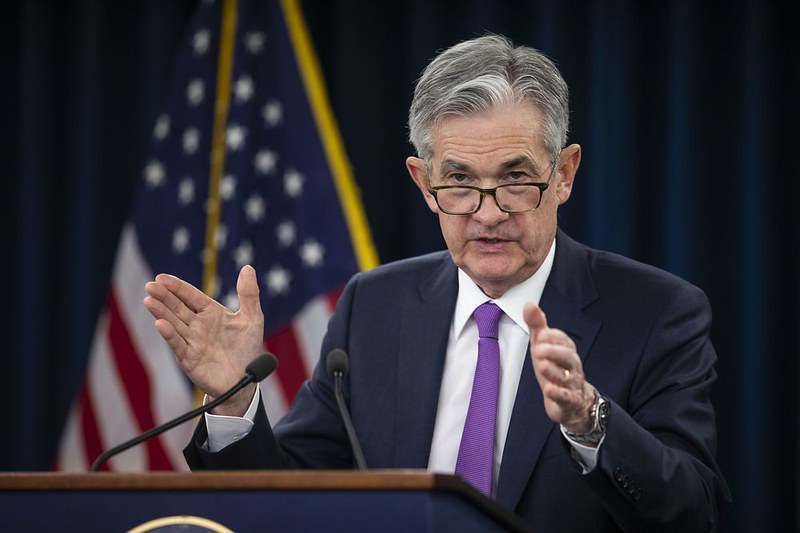 Jerry Powe, the Fed chair, said he expects interest rates to remain at zero through 2022. Photo by Simone Fontana via Flickr

The Federal Reserve left its interest rates unchanged at zero at its June policymaking meeting and maintained a cautious projection on the economy, signaling that it would keep the rates at zero at least through 2022.

Jerome Powell, the Fed chair, said at a post-meeting news conference that he projected a slow economic recovery from the pandemic could start in the second half of 2020 and last years.

“We’re not even thinking about raising rates,” Powell said to reporters. “So what we’re thinking about is providing support for this economy. We do think this is going to take some time.”

The Trump administration has pushed for more extreme stimulus measures, from monetary to fiscal policies and predicted a rapid recovery from the coronavirus. He lashed out against Powell on Twitter in March, saying the Fed had “raised rates too fast and lowered too late,” and urged the Fed to “stimulate!”

Yet, even after the Fed slashed interest rates and launched the unprecedented asset-buying program, the latest forecast still disappointed the president’s optimistic look.

The Fed has two explicit goals: to keep the long-term inflation rate stable and maximize employment. As the pandemic slashed Americans’ spending power, the inflation rate has remained well under the central bank’s 2% target. The Fed acknowledged that the “unemployment remains historically high,” despite the surprising May jobs report.

In May, the Bureau of Labor Statistics reported that the US economy added 2.5 million jobs, with the unemployment rate declining to 13.3% from April’s 14.7%. But the report included a note saying that there had been a “misclassification error,” and the overall unemployment rate could “have been about 3 percentage points higher than reported.”

“The May employment report, of course, was a welcome surprise. Very pleased. We hope we get many more like it. But I think we have to be honest that it’s a long road,” Powell said in the press conference.

The Fed will continue to buy bonds as it continues one of its stimulus programs known as “quantitative easing.” That program increases the country’s money supply and further reduces interest rates, which in turn, can boost the economy by making it more attractive for households and businesses to borrow money. Since starting the program in March, the Fed has tapered it significantly, purchasing just $4 billion per day in Treasuries this week versus $75 billion at the peak in March.

Powell said, in the next few months, that the Fed will “gradually reduce the pace” since the ongoing purchases “have helped to restore orderly market conditions and fostered more accommodative financial conditions.”

After not giving an economic outlook during its March meeting, citing tremendous uncertainties ahead, the Fed gave its first forecasts for the economy since December. Fed officials expected the real GDP to contract 6.5% in 2020, with the unemployment rate at 9.3%. The US economy shrank by 4.8%, marking the first contraction since 2014.

This cautious tone is in line with analysts’ predictions. “There are potholes in the road ahead,” James Knightley, chief international economist of Ing, said in a statement. Knightley expected the economy to contract at around a 40% annualized rate in the second quarter of 2020.

The Atlanta Fed’s latest model projected a 48.5% annualized drop in GDP in the second quarter, while the St. Louis Fed and New York Fed, which were more optimistic, estimated  25% and 35% declines respectively. A slowdown of that magnitude would mark the deepest quarterly drop in economic activity on record, since the government started tracking the data in 1947.

In response to a question about the Fed’s forecasts, Powell noted that the future is highly contingent on the pandemic. The World Health Organization on Monday warned that the pandemic is “far from over” after a record number of new daily cases in Central America and Latin America.

In the US, after the Memorial Day weekend and nationwide protests in support of black lives, at least nine states reported significant upticks in coronavirus hospitalizations, according to the data of John Hopkins University. If a second wave arrives in the fall, as the Centers of Disease Control and Prevention Chief Robert Redfield warned, states could be forced to shut down again.

Powell said that the Fed would do “whatever we can, and for as long as it takes to provide some relief and stability” and to “limit lasting damage to the economy.”