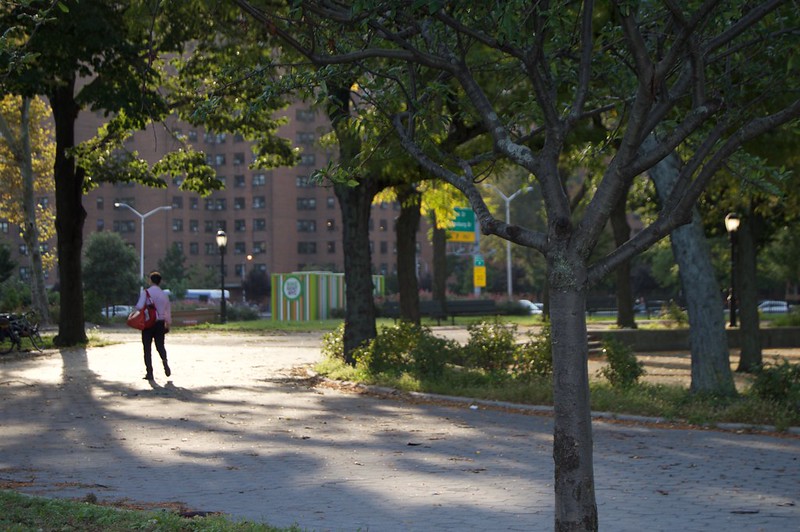 The East River Park is a transportation channel that residents of the Lower East Side use on a daily basis. Whether by walking, biking, or running. Photo by Samantha Springer.

Lower East Side and East Village community members found no solace in the news last week that construction for its $1.45 billion plan to elevate East River Park will continue in the fall, but likely not in the order the city originally announced.

Now, the community must juggle two disasters: the flood vulnerability that Superstorm Sandy revealed eight years ago and remains unchecked and the mounting concern for open park space that the COVID-19 pandemic has made urgent.

During Wednesday’s City Council executive budget hearing, Commissioner Lorraine Grillo, of the city’s Department of Design and Construction, said there will be a “shovel in the ground” in the fall, but that there may be some changes to the order of the phases and the numbers of areas that go under construction at a given time. The current timeline calls for completion by 2025. “We do not want to disturb social distancing in any way,” Grillo said.

“We worked very, very hard to make sure large portions will remain open during the project,” Grillo said in response to a question posed by Councilmember Carlina Rivera, who pushed the comprehensive East Side Coastal Resiliency Project through City Hall. Grillo said the department will make changes as needed, “but our goal is to maintain that timeline.”

Better quality of life and appropriate park access has been a core issue in community resistance to the resiliency plan since last August. Pat Arnow, founder of East River Park Action, one of the community groups rallying against the ESCR plan, said that she had been hoping the pandemic would strong-arm the city to put a pause on construction. Community activists have focused their dissent on sparing local residents from risk, whether it be from flooding, air pollution, or disease.

“The situation is so dire with coronavirus that it makes our arguments even more urgent,” she said in a phone interview.

Arnow already had expressed displeasure with the idea of phased closures back when they were announced haphazardly in October, a day before an important community hearing. (During that meeting, Councilmember Rivera called the city’s decision to provide phasing information a day before the hearing as “unfair.”) Arnow, when told about Grillo’s announcement last week, said she had a knee-jerk reaction: “My first thought was just like whatever it is, it’s probably going to be bad for us.”

As the plan stands, it includes no provisions for interim flood protection measures during the construction period that is expected to last at least five years. And no one wants another Superstorm Sandy.

In 2012, Sandy ravaged the area with a 12-foot storm surge, snuffing out electricity and heat for thousands of people. Hospitals, severed from sources of power, had to evacuate. The trains, suspended since the day before, were inundated from track to ceiling. Over the course of a few hours, Sandy brought New York City to a halt. Those who heeded early warnings and had the privilege of having a car, a second house, a family friend with an apartment on higher elevation were lucky. But the poor, the working class, the elderly, and the disabled — like those who live in public housing in affected areas —  could not flee. And just like that, Sandy killed 43 people across New York City’s five boroughs. A similar story is unraveling now with the wealthy who have fled to vacation homes as the coronavirus takes hundreds of lives a day in the city alone, forcing officials to reckon with failures in its bureaucracy and infrastructure.

Superstorm Sandy is what inspired the city to elevate East River Park and its surroundings from East 25th Street to Montgomery Street. The ESCR is a much-altered portion of Rebuild by Design’s “The Big U,” a protective system proposed for the lower tip of Manhattan to safeguard the waterfront from sea level rise. The ESCR, which is the first of several “resiliency” projects, initially would have closed East River Park completely for three years. The plan called for the city to uproot 2.4 miles of coastline during that period, rework electricity, gas and plumbing, and pack fill. After community dissent  erupted from East River Park Action and East River Alliance, Mayor Bill de Blasio announced last October that the project would be completed in two phases.

This “phased” version of the ESCR announced in October still had the original goals: flood protections completed by 2023 and an elevation of the park by eight feet by 2025. In de Blasio’s press release at the time, he said the first phase of construction would take place from fall 2020 to spring 2023, during which the vast majority of the park areas from Delancey to Houston Streets would remain open, along with the amphitheater area in the south and the area to the north that runs from  from East 10th to East 12th Street. The second phase was to start shortly thereafter with an end goal of late 2025. Then, the press release said,  that the newly rebuilt portions of East River Park would open from Houston Street to approximately East 10th Street, as well as the vast majority of the park areas from Corlears Hook Bridge to Delancey Street. The Esplanade in the center of East River Park, is also scheduled for reconstruction, but on a separate schedule.

“The community spoke and we listened,” de Blasio said at the time. “Nearly half of East River Park will remain open throughout construction – without compromising essential flood protections for 110,000 New Yorkers. We are building a more resilient city to meet the challenge of global warming head-on.”

Currently, it’s unclear exactly how phasing will change, if it will at all, said Jeremy Unger, the spokesperson for Councilmember Rivera. Regardless of potential phase changes, the prospect of closing a park, even partially, during a pandemic in a city where fresh air is hard to come by has presented new concerns for the community. In the past few weeks alone, access to open spaces while social distancing in New York City has become a hot-button issue. While Governor Andrew Cuomo acknowledged that going outside is a necessity for mental and physical health, the city does not consider parks an essential service — leaving room for confusion. Either the  parks are packed (or are perceived to be) or heavily policed. Not to mention, the parks that are the most cramped tend to be in poorer areas with less access to open spaces and more air pollution.

That fact is not lost on Arnow of East River Park Action. “You need to keep this park open for residents,” she said, “and you don’t need dirty air with construction during a pandemic.”

Air pollution has been a concern for both Arnow and and Green Map System director Wendy Brawer, who has advocated for 1,000 trees to be planted in Community Board 3’s area (those trees are now split with Community Board 6). In a phone interview, Brawer mentioned that the removal of mature trees, whether in East River Park or on public housing campuses, presents a concern for air quality, especially now.

“Air quality is not just a nice thing,” Brawer said. “It’s actually a justice issue. It’s really important to slow down that destructiveness, whether it’s in the park or around the park and the work around the park has to do with.”

Arnow said that during the past few months of social distancing, it’s been hard to get an answer about the construction timeline. Initially, construction was supposed to start in the spring with conversion of  Lower East Side Ecology Center’s compost area into a rec space that would have been available for community use during construction in the fall.

Ian Michaels, the spokesperson for the design department said the community resistance to the project caused the delay, not the pandemic.

“There’s been no delay because of COVID,” Michaels said. “A few months ago, the local community asked that we push back the work at the Ecology Center so the compost area could stay open through the summer, and the City agreed. That’s all. The main work is still scheduled to proceed as planned in the fall.”

There had been hope that because of the pandemic, construction would be meaningfully delayed while groups like East River Park Action and Loisaida United Neighborhood Gardens, known as LUNGS, push through with an alienation lawsuit that seeks to derail the project altogether or at least get more definitive interim flood protection while it is underway. Charles Krezell, president of LUNGS, voiced similar opinions and said in a phone interview that the lack of transparency or clarity about what’s going on is “such bad public policy.”

“It shows how much they don’t really care about the interests of the community,” Krezell said. “I don’t know what to think. We were hoping our lawsuit is going to put the kibosh on this thing anyway. So that’s that’s our hope right now. But right now, we need temporary storm protection immediately and there’s nothing like that in the offering. So whatever plan they come up with, we’re going to be unprotected for the next five, at least five years, of the community, and we’re having storms rolling in all summer.”