Good News: Coronavirus spread may be slowing in New York 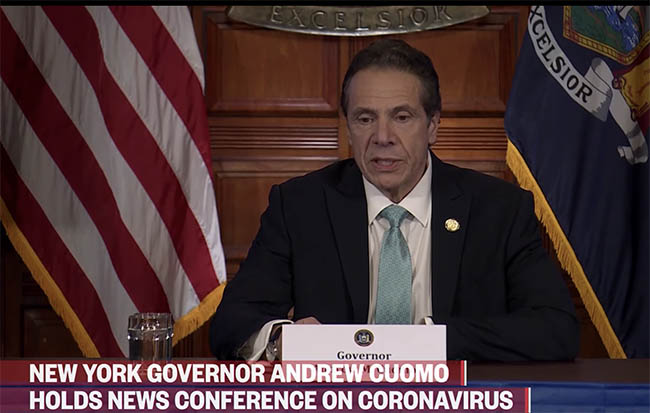 Three days after putting the state in a virtual lock down,  Governor Andrew Cuomo finally has good news to share. Hospitalization rates are slowing down.

“Density controlled measures are working,” said the governor,  at a press conference this morning.“Yes, they are burdensome. But they are effective and necessary, and the evidence suggests at this point they have slowed the hospitalizations.”

“Now, that is almost too good to be true,” said Cuomo. “But if you reduce the density, you can reduce the spread very quickly. . .This is a very good sign and a positive sign.”

“It would really be terrible for the state of New York..We’re looking at a shortfall revenue shortfall of nine , 10, $15 billion dollars. This response to this virus has probably already cost us $1 billion,” said Cuomo. “That is a drop in the bucket that has to meet.”

Cuomo also stressed that if New York does not receive enough ventilators, hospitals would not be able to cope. He said  New York needs 30,000 ventilators, but currently has 3,000. The federal government will send 4,000, but they withholding ventilators is not to blame for the shortage. This is a sudden switch in rhetoric for the governor, who lashed out at FEMA Tuesday morning, at the time promising to send only 400 ventilators to the state.

“What we’re working on is a common challenge. No one has these ventilators and no one ever anticipated a situation where you would need this number of ventilators to deal with a public health emergency,” said Cuomo “We have purchased everything that can be purchased.”

Cuomo pushed the need for production of ventilators, saying that in his recent discussion with President Trump, companies such as General Motors could be utilized to make this necessary equipment.

“The problem is our timeline is so short, we’re looking at an apex of 21 days in that range,” he said. “He suggested that instead of equally dividing equipment, the federal government should prioritize necessary material to the country’s biggest “hotspot”, first being New York City.

“As soon as we get past our critical moment, we will redeploy that equipment and personnel to the next hotspots,” he said “And I will personally guarantee it and personally manage it. We’re asking the country to help us. We will return the favor. And we are all in this together.”