Jewish traditions during a pandemic 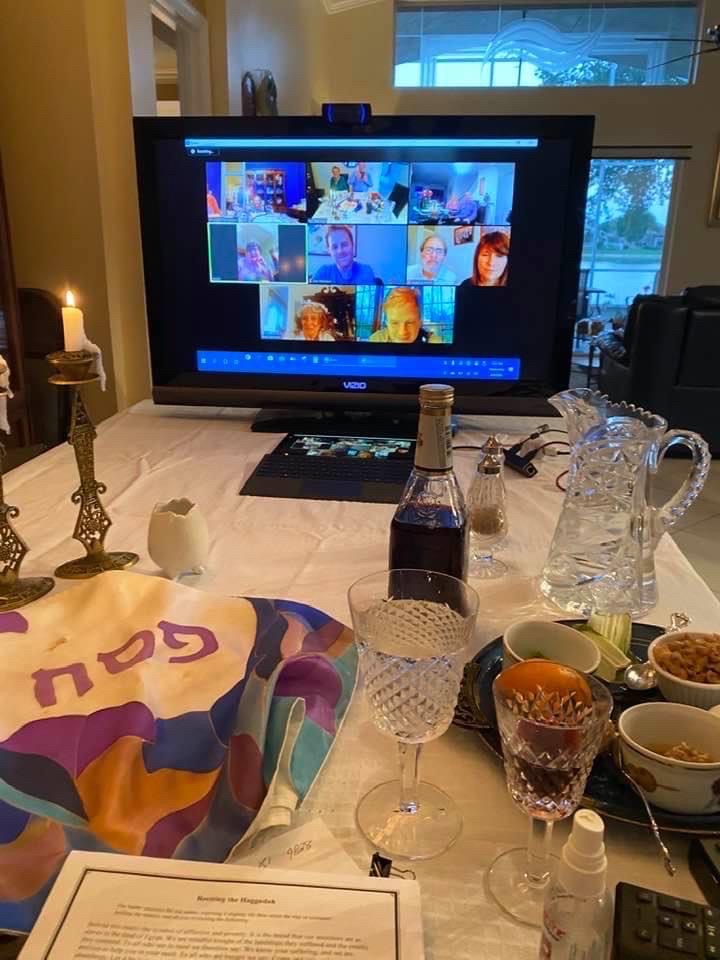 A zoom Passover Seder during the coronavirus shut down. Photo by @ptl826 via Twenty20

Passover marks the beginning of spring. Families eat matzah and stir charoset, eating the traditional dessert with wine for Seder. They recite Hebrew prayers while elders lead the Haggadahs, the story of Passover, which celebrates the day that Hebrews escaped bondage.

But this April, families celebrated the tradition while isolated inside of their homes.

Because of the coronavirus pandemic that has overwhelmed the nation, households have been observing long-established traditions through computer screens. Families are using platforms like Zoom to celebrate in isolation.

Rabbi Gavriel Bellino, the rabbi of Sixth Street Community Synagogue in the East Village, experienced the struggle of families who yearned to celebrate but couldn’t risk contamination.

“Because you know, people are used to these big family meals. They’re used to grandparents with their grandchildren,” he said. “It was like ‘your grandchildren are going to kill you.’ It became the inverse of the normal Passover, and we define it by community and we think about multi-generational, and it’s precisely those things that you couldn’t experience.”

Synagogues across New York have closed their doors in fear of spreading coronavirus, and at a press conference on March 27, Mr. De Blasio said that synagogues holding in person services would be met with enforcement agents.

“I want to say to all those who are preparing for the potential of religious services this weekend: If you go to your synagogue, if you go to your church, and attempt to hold services after having been told so often not to, our enforcement agents will have no choice but to shut down those services,” he said.

But in late April, mourners gathered in Brooklyn for a funeral to honor a prominent rabbi who died of coronavirus. It was held by Hasidic and Orthodox communities of Williamsburg, and over 2,500 people attended. According to Yeshiva World, the funeral was for Rabbi Chaim Mertz, and was the first event in which Mr. De Blasio personally participated in dispersing crowds, and posted on his Twitter page.

“My message to the Jewish community, and all communities, is this simple: the time for warnings has passed,” he said. “I have instructed the NYPD to proceed immediately to summons or even arrest those who gather in large groups. This is about stopping this disease and saving lives. Period.”

Rabbi Bellino, who struggled with the closure of his own synagogue, said that generalizations about a group can be harmful even if the mayor is trying to protect them.

“I understand the desperation, when you’re trying your best to keep people safe, and you see people flagrantly violating that you lose your mind,” he said. “No good can come of broad stroking a whole group of people. Even if he just said the ‘Hasidic’ community, it would have been offensive because a lot of the Hasidic community is taking this very seriously.”

Like other traditions, synagogues have been organizing memorials at home to grieve through Zoom.

For Rabbi Bellino, his synagogue wanted to honor the death of their music teacher and conducted the memorial online.

“He had passed away last year and they had planned this memorial event, to remember him and honor him on the anniversary of his passing and so they did that on Zoom,” he said. “They’ve limited the number of people that can attend a funeral. There are no funerals being held, or the burial event is limited to two or three people and the rabbi.”

Because of the restrictions on holding funerals, Rabbi Bellino said that people are holding “Zoom Shivas.” “Shiva” is where families mourn together after the burial of the deceased.

But for many people, Shiva hasn’t been the same in isolation.

“Obviously part of the tragedy is either people being taken away from us way too quickly, suddenly, but also to lose people that just died because people die who then can’t be mourned according to these traditions, these ways that people find meaning in,” he said. “They can’t do that or they can’t have that connection and next thing you know, they’re gone and there hasn’t been that system of dealing with them.”

But he said that Zoom Shiva has been an alternative for people who have no other way to honor the deceased. He said that his friend had a Shiva for his father.

“They did not Zoom the burial or funeral, but they did have a Zoom Shiva. It was a little strange, but it was also really nice.”

But some people found it impersonal to be honoring a person through technology. Specifically, when a friend suddenly dies from COVID-19.

“It was horrible that he died.  It was tough to attend his memorial service via zoom, rather than in person,” said Eric Morris, a synagogue member in Syracuse, New York. “It was really hard.”

Morris said that he hadn’t seen his friend in a long time so it was difficult saying goodbye to him online, but he said that he enjoys continuing some traditions on Zoom.

“My wife attends Saturday morning service on Zoom with our synagogue,” he said. “We had a Friday night service. We meet people from our synagogue about two to three times per week online.”

He said that Orthodox families are still holding funerals but are abiding by social distancing guidelines.

“A friend called me and asked me to come. We were all six feet apart, everyone was wearing masks,” he said. “It was a regular funeral, less than 20 people attended.”

He said that it was important for the family to commemorate death with an in-person ceremony.

“Instead of a zoom, the Orthodox rabbi requested an in-person funeral. It was just immediate family, and they had to do it in-person.”

But some synagogue members are embracing online resources, and are joining online clubs with Chabad groups to stay in communication.

“It’s a Jewish women’s group, it’s a book club, it’s for current events, and they talk about helping out people in the community,” said Robin Gersen, a native New Yorker. “I had this mahjong game I used to play periodically, and now they are playing online.”

She said that her uncle died of coronavirus complications and her family had a Zoom memorial to honor him.

“My uncle Al was 70, and he passed away in mid-April. He died in a nursing home in Queens,” she said. “No one was able to see him in the nursing home, so that was the hard part.”

But she said that technology helped her family cope when it was all too clear that being together wouldn’t be safe.

“In March, they wouldn’t allow any visitors. His wife and daughter weren’t able to go visit him for the last month of his life, but he was able to speak with his grandchildren on FaceTime.”