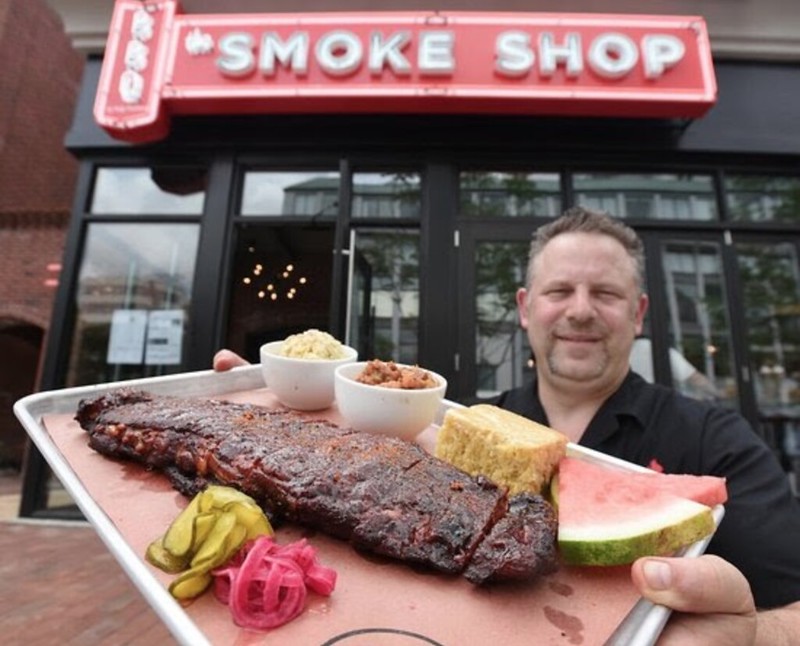 Photo courtesy of Andy Husbands. Andy Husbands, the owner of The Smoke Shop in Boston, has seen his business turned upside down by COVID-19.

On March 11, as COVID-19 spread across the world, Italy closed all shops and restaurants nationwide.  The next day, as the United States reported more than 1,000 cases, a group of chefs discussed the widening pandemic over dinner in a sprawling Romanesque mansion on New Orleans’ historic St. Charles Avenue.

The elegant dinner party was hosted by John Houghtaling, a partner at Gauthier, Murphy and Houghtaling, who had built a name for himself by representing property owners against insurers following Hurricane Katrina and Superstorm Sandy, securing hundreds of millions of dollars for the victims of those crises.

That afternoon, a Texas-based attorney passed along a memo to Houghtaling describing how some insurance companies planned to reject claims filed by restaurants and other businesses that would be forced to close to stop the spread of the virus. When the chefs arrived, he had to break the bad news. While many of them had insurance policies designed to protect them from unexpected interruptions in their operations,   they shouldn’t expect to see a payout.

The memo outraged Houghtaling, who realized that thousands of small business owners, particularly restaurant owners, would be hit hard by the pandemic and see no relief from insurers. He decided right then that he would take action, and the party quickly became a strategy session.

“Every day I get calls about the restaurant industry failing, so we need a quick solution,”  Houghtaling said.

“They need it,’’ he said of the insurance payouts.  “It’s critical. If they do not get it, they will fail.”

On March 17, Houghtaling filed a lawsuit on behalf of New Orleans Restaurant Oceana Grill against its insurer, demanding payment of the restaurant’s business interruption insurance during the coronavirus pandemic, the first suit of its kind in the nation. The lawsuit highlights a legal strategy embraced by lawyers and restaurant owners hoping to salvage an industry that is reeling from the effects of coronavirus shutdowns.

In other cases, business owners have learned that they do not technically qualify for coverage without physical damage to their property. Because Oceana Grill does not have a virus exclusion, Houghtaling’s lawsuit argues that the infectious virus does qualify as physical loss.

A handful of similar lawsuits have cropped up across the country, and eight state governments have proposed bills that would force insurers to pay. Notably, the Chikasee and Choctaw nations have filed suits against their insurers, and Houghtaling himself filed another suit on behalf of celebrity chef Thomas Keller.

But while the stakes are high for attorneys like Houghtaling, small business owners are fighting for their lives against a ticking clock.

Twenty eight states have mandated that restaurants suspend dine-in services, and many more are impacted by shelter in place orders. By the end of March, the National Restaurant Association estimated that roughly 30,000 of the more than 1 million restaurants in the U.S. had to close permanently as a result, and projected another 110,000 more would shutter in April.

Many restaurant owners fear that legal settlements and new legislation may come too late. Many are already running out of cash and nearly out of time, barely holding on financially as these legal and political squabbles play out around them.

“I’ve been through 9/11, 2008, 10-foot snowstorms, a lot of this stuff,” said Andy Husbands, a Boston restaurateur who has been told that his insurer is unlikely to pay out his business interruption insurance policy.

“We knew we would get past it, we just had to work hard,’’ Husbands said of previous crises. “We knew the snow would melt. We don’t know what the future holds now.”

The insurance industry argues that its reserves, about $820 billion, cannot cover all of the business interruption claims arising as a result of the pandemic. Many insurers are calling for more government relief.

Bartosh suggested the creation of a partnership in which the federal government would share risk with the insurers. Without such collaboration, he warned, the insurance industry could be overwhelmed by the business interruption claims.

“I definitely think there’s a position for the industry and federal government to work together to figure out how we can protect against any future pandemic,”he said.

In the meantime, the lawsuits filed by Houghtaling and others are winding their way through the courts. For the insurance industry, this boils down to simple contract law and interpretation.

Generally speaking, for an interruption policy to kick in, some form of physical damage or the threat of it must be the cause of the business shutdown. Despite the fact that the coronavirus can contaminate surfaces and create unsafe environments, it may not qualify as physical damage.

“The key issues will be whether coronavirus constitutes physical loss or damage under the policy, because those are the triggering words,” said Steven Badger, a Texas-based attorney who represents a number of insurers, and shared the memo with Houghtaling that night in March.

Recognizing the importance of the restaurant industry, and how quickly it could collapse, Houghtaling began working quickly to turn up the heat on insurers and get relief to restaurants.

What followed was a flurry of legal and political actions. Houghtaling and seven celebrity chefs founded the Business Interruption Group, a non-profit organization designed to pressure insurers and get information to the public and Washington. Although the results remain to be seen, Houghtaling, whose firm played a leading role in the $246 billion class action suit against tobacco companies in 1998, said that this legal fight would “dwarf tobacco in terms of its significance.”

“We are demanding the insurance industry pay the policies they owe,” Houghtaling said. “Certain [business interruption insurance] policies have exclusions for viruses, but many do not. They need to pay the ones that do not.”

Houghtaling dismissed concerns raised by insurers who argue that their reserves can’t cover all of the payouts sought by shuttered businesses.

“My argument is, when the Titanic was sinking, and they didn’t have enough lifeboats for everyone, the captain didn’t say ‘well, we don’t have enough so we aren’t going to lower any,’ he lowered the ones that he had,” Houghtaling said. “We need to lower the lifeboats that we have and that we paid for, and then we need a solution to save the rest.”