Mexico’s COVID-19 numbers are about to blow up 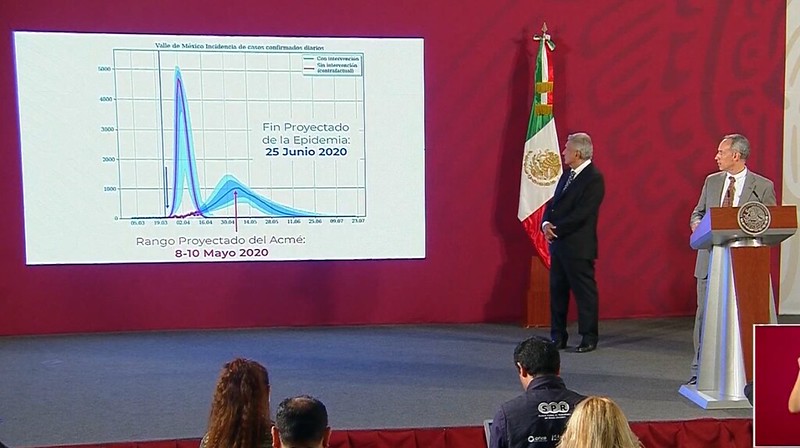 Hugo Lopez Gatel, Mexico’s Secretariat of Prevention and Promotion of Health, standing next to President Lopez Obrador during a press conference. He predicts Mexico will be clear of coronavirus by June 25th.

In Mexico, yesterday phase three of the pandemic started. There are now more than 6,000 confirmed cases of infection, 486 registered deaths, and 2,000 people have been discharged. The hardest-hit cities in Mexico are now Mexico City and the  U.S. border city Tijuana.

During this phase, the spread of the virus is expected to be extensive and the number of infections will rise steeply every day, making the chain of infection increasingly difficult to control both medically and socially.

“The scientific estimates establish that the maximum peak of coronavirus infections in Mexico will be between May 8th and 10th,” said Hugo López-Gatell, head of the Sub secretariat for Prevention and Promotion of Health, in the Ministry of Health of Mexico. “Ninety-five percent  of the expected cases will be registered by June 25th, and then we expect continuity with very low rates of transmission that will be extended throughout several weeks.”

The situation, as reported on official records, is not as severe as other countries in Latin America. Brazil has now more than 29,000cases and 1,000 deaths, followed by Perú, Chile, and Ecuador were in each, confirmed infection surpass 8,000.

However, in Mexico, there are 11,000 unconfirmed suspected cases of infection. The delay has been attributed to a lack of testing, and an incapacity to test the overflow of patients more efficiently. More than 42,000 people have tested across the country.

Meanwhile, doctors from different hospitals throughout the country have reported that suspected cases of COVID-19 are registered as “atypical pneumonia”. The amount of deaths caused by atypical pneumonia has skyrocketed in the last weeks and has been called a new epidemy.

Mexico has acknowledged that it continued sending supplies like face masks to China in February, only to have to buy some back at a higher cost. Government officials argue that they couldn’t stop companies from selling abroad without declaring a national emergency, which could not have happened without enough registered cases of infection. Diplomatically, not filling those orders would have hurt the nation’s ties abroad.

Most of the company’s manufacturing medical supplies in Tijuana fall under Mexico’s maquiladora program, which means they benefit from tax breaks in exchange for assembling goods that must be exported.

Phase three was expected to begin on April 24th. Measures taken in phase two will be reinforced, such as social distancing, the lockdown of non-essential business, and remote school. New measures such as soliciting private hospitals to operate as public, a total restriction of general admissions that are not emergencies, mandatory use of face masks and gloves for people in public spaces, police enforcement of quarantining for the sick and those that are entering Mexican territory from other countries.

The lockdown is expected to be lifted by May 30th.