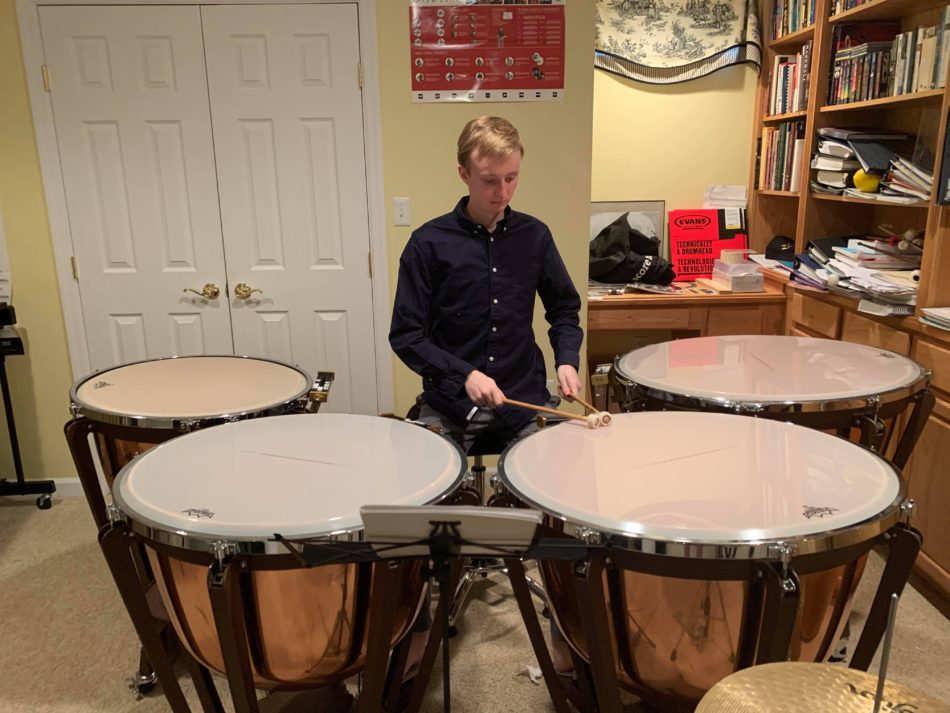 Jake Borden, 20, is a student at The Juilliard School in Manhattan.

Every morning during quarantine, 20-year-old Jake Borden wakes up at 6 a.m. and breaks out his marimba mallets. He places a computer on the far side of his basement, hits record and ever so delicately begins to practice, making sure his percussive strokes don’t overwhelm his computer’s microphone or worse — wake up his family.

“I usually try to play as soft as possible,” said Borden, a second-year percussion major at The Juilliard School who now must perform at home in Cranbury, New Jersey due to the coronavirus outbreak. “I start on my practice pad when everyone’s asleep and as the day progresses I’ll typically try to start on timpani and snare.”

From finding out which computer angle picks up the best sounds of his drums to reworking an otherwise rigid practice schedule, Juilliard for Borden has never looked so different.

“It’s forcing us to work on our finer techniques,” he said. “Since we can’t go through the motions of in-person rehearsals and lessons, we finally have a chance to perfect our basic skills on the practice pad.”

Ever since music schools were shut down last month, music majors across the country must now come up with creative ways to sharpen their skills. 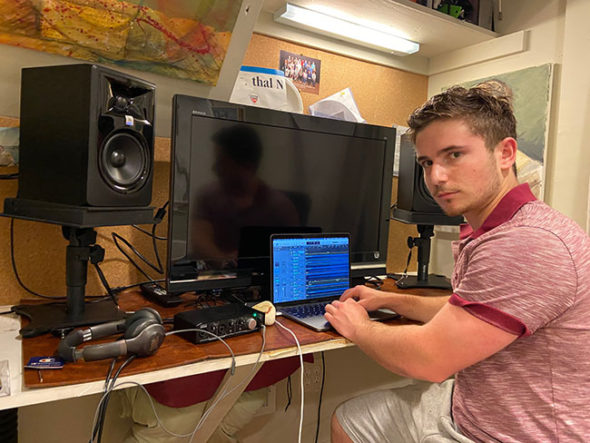 Noah Lilienthal, 19, is a student at Wesleyan University in Middletown, Connecticut.

For 19-year-old Noah Lilienthal, a second-year music major at Wesleyan University, that means setting up a make-shift practice space in his crowded household. He places thick boards of cork in his room to buffer the rhythmic clapping that will happen during his Solkattu South Indian music class. The oil painting from his father that hangs on the wall is now turned towards his monitors, acting as a barrier between his wails on saxophone and the five people living in his home.

“I’m in a New Music Ensemble where my professor has us record some pretty out there and atonal stuff,” he said, laughing. I’m constantly squeaking and tapping on my saxophone and my family wouldn’t want to hear that shit.”

Although Borden and Lilienthal are able to send recordings to their professors, many of their performance classes have turned into lecture style courses.

But even those have been challenging over video.

“The connection just sucks sometimes,” Borden said. “The professor may say some great point during a lecture and then the bandwidth just goes out the window.”

“The delay is the worst in my South Indian music class,” Lilienthal also said. “Normally we’re all sitting in a circle clapping and relying on our professor’s visual cues, but I can’t line up with his beat when they’re delayed!”

While laggy connection has delayed their classes, the situation hasn’t dampened their musical hunger.

“My friend John and I have been trying to push each other to learn a new jazz standard each week,” Lilienthal said. “You’ve got to push yourself even when nobody’s telling you to do so.”

Borden has taken on the same mindset, using the time spent at home as an opportunity to come back to school stronger.

“You’ve got all the time in the world now to practice, so people are almost expecting you to come back better and ready to go,” he said.

“I’ve been working on producing and composing a lot,” he added. “I’ve been making a 2010’s style pop song just to see if I could do it. Now’s the time to show that you’re irreplaceable as a musician.”