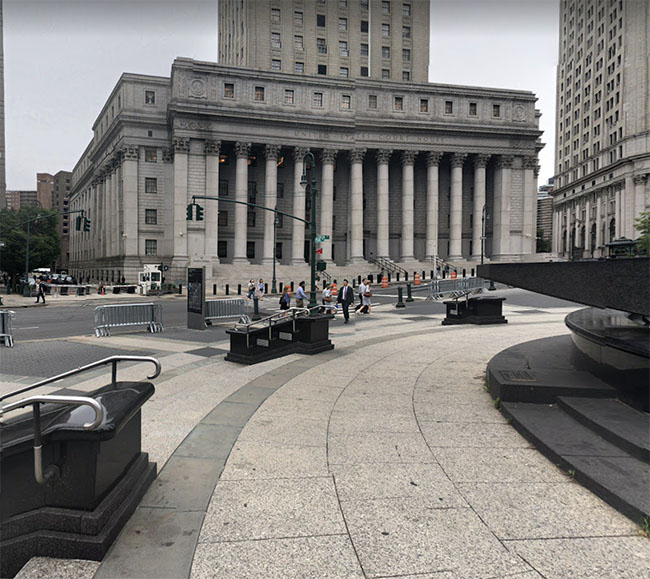 In mid-April, while in detention at Manhattan Correctional Center for charges including racketeering and felony possession of a firearm, a client of attorney Sarah Sacks started to feel chest pains. Then he lost his senses of taste and smell. He contacted Sacks, who quickly filed a motion to secure home confinement in light of the health-risk. Five days later, Sacks’s client still had not been tested, and she asked once again that her client be released. On April 24th, that request was denied.

Not once did Sacks see her client, the opposition, or the judge during this time.

“I am yet to have a video conference,” Sacks said . “I have only had conferences by call.”

Since the Southern District of New York closed its courts and jails in late March because of the pandemic, everything has gone remote. The Judiciary Conference of the United States, an administrative body that oversees the federal courts, quickly established guidelines for video and telephone use for everything from court proceedings to attorney-client meetings based on the rules set by the Coronavirus Aid, Relief, and Economic Security Act. But defense attorneys are finding that these guidelines do not adequately protect the rights of their clients.

“In order to have a meeting with a client, you have to proffer a specific reason why you needed them on video,” Sacks explained. “There is no sense of what meets that threshold.”

Sacks fears that a lack of defined rules risks the privileged nature of attorney-client communications. Damien Brown, a private attorney with nearly 23 years experience in both state and federal courts, agrees.

“Is it a Sixth Amendment violation? It is.” Brown believes that the coronavirus pandemic has created an unfortunate, but unavoidable dilemma for the courts.  “This is all new and crazy. Our clients are suffering.”

Brown has also been unable to see his clients in federal jails, while those in state are more reachable. “In the state court we’ve at least had video conferences with our clients, and that’s a lot better than just speaking to them on the phone.”

Attorneys and clients build their relationships through face to face meetings. It is there where they can go over documents, discovery materials, and strategize what direction to take in court. The coronavirus pandemic has put an end to that, with federal courts not having the necessary infrastructure to provide reliable videoconferences for defendants and their attorneys.

According to Brown, this has severed what many defendants consider a vital component of their service.

“Imagine having to tell your attorney—who you don’t know—something very confidential,”  Brown said.

He experienced this dilemma when a client lied to him over the phone. The defendant felt he could not trust an attorney that he hadn’t met.

“Later, when we were able to set up a little bit more secure phone call that had nothing to do with court he finally admitted to me,” he said.” It just goes to show: how do you build trust?”

While the lockdown erodes attorney-client relationships, it also is hampering the defense’s ability to keep their clients prepared for trial, Sacks said.

“They’re not allowing the people who are detained to look at their discovery,” she said. Jail libraries are closed, rendering inmates unable to access computers and look at discovery documents that detail information like what evidence there is against them. Coupled with the lack of video conferencing, attorneys have no way to adequately inform their clients.

“This is a huge right to counsel issue,” she said.

While defense attorneys navigate these obstacles, federal prosecutors received the benefit of cooperation from the Department of Corrections and Federal Bureau of Prisons when arguing against prisoner releases. In the early days of the pandemic, this was a big advantage.

“The courts would accept affidavits or testimony from DOC employees which would state that the inmates are socially distancing, they have protective equipment, they have soap,” Brown said. “I’m hearing from all my inmates, ‘no they didn’t.’ So how do we confront that?”

Employee accounts were not supplemented by visual evidence either.

“They are the only ones who have access to really see what’s going on, and it’s not like they are videotaping it and showing the judge,” Brown said. “They are just either providing a statement or a testimony. It’s very unfair.”

Sacks experienced what she believes was a deliberate attempt to obscure the current conditions at the MCC while she argued for her client’s release. The jail provided the opposition medical records that predated her motion concerning the prisoner’s health.

“They never even gave him an opportunity nor did they report that he had asked to see a doctor,” Sacks said.

She considers it part of a larger effort to suppress the true conditions of the facility.

“There’s been a great big cover up by the BOP, and I think a lot of lawyers in my position would agree.”

As of today, the jail registered no positive COVID-19 cases among inmates and 12 among corrections officers. Only five inmates have tested positive since the shutdown of federal jails.

“We’re hearing from all our clients—and I’ll tell you most of my clients that are there had symptoms or currently have symptoms of COVID—that the MCC has done absolutely nothing about it,” she said.

Sacks explained that the low contraction numbers are used to argue that it is safer for the prisoners than outside it.  “They claim that they’re screening them, that they’re keeping them locked down, ‘quarantining’ them, but how can you quarantine somebody when it’s an overcrowded jail system?”

The MCC currently houses 677 inmates. It was designed to hold 449. In the early days of the lockdown, quarantine meant isolation in the jail’s Special Housing Unit, or SHU, typically used for solitary confinement.

“It’s a catch-22. If they push for these tests, they’re fearing being put in the SHU,” Sacks said. “The SHU is reserved for punishment.”

In late April, a contraband video of the jail conditions surfaced. In it, the narrator highlighted the congested and unhygienic living conditions that inmates have to endure. That same day, five inmates at the MCC filed a class action lawsuit against its warden, Marti Licon-Vitale. The suit requests writs for habeas corpus for all inmates that have suffered due to the conditions in the jail. A motion for preliminary injunction relief was submitted this past Tuesday.

“They are lucky they haven’t had many deaths,” Sacks said. “It’s going to explode at some point.”