NYU international students struggle with move out of dorm orders 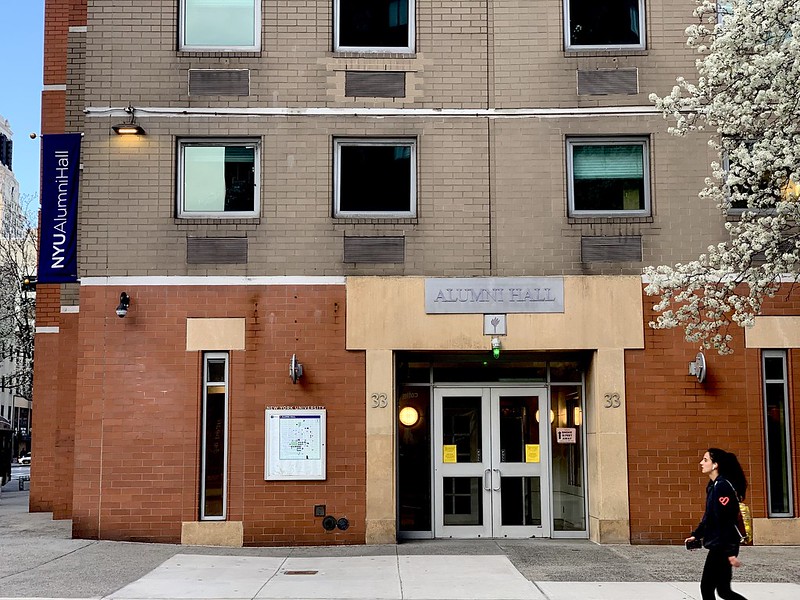 Alumni hall is one of NYU’s upperclassman and graduate student dorms, located close to the main campus. Photo by Catarina Lamelas Moura

Paola Nagovitch traveled to Puerto Rico on Friday the 13th. Even in uncertain times, when worries from the coronavirus fill everyone’s minds, she couldn’t imagine how the bad luck myth would turn to reality in the ensuing days.

On her way to stay with her family for spring break, and until in-person classes resumed, she packed the essentials, leaving the rest behind in her New York University dorm room.

That Sunday, the government of Puerto Rico put in place a curfew. And on Monday, to her dismay, a memorandum from her university announced that all dorms would be shutting down, giving approximately 12,000 students living in housing less than a week’s notice to move out, and advising them to do so within 48 hours.

“It was contrary to everything they had told us up until that point,” she said. “They could have told us to move out before spring break. Everything I own is in that room.”

All over the US, universities have been closing down student housing in response to the new coronavirus outbreak, some of them turning the dorms into facilities for quarantine or temporary hospitals. The situation has been escalating day by day, and institutions have been struggling to quickly respond to an unprecedented crisis.

New York has been hit particularly hard, and is quickly becoming the epicenter of the outbreak in the US.

The email sent out by NYU President Andrew Hamilton on March 16th offered to have student’s belongings packed and shipped for free and assured they would be reimbursed for the rest of the semester. It instructed those who were away for spring break and planned to return to “do so as soon as possible”.

It also gave students the possibility to petition for an exception, noting that “the bar will be high” and warning them that they might still be asked to move to another house. According to several students, the university only responded to their requests on Thursday, three days before the final deadline to move out.

“I decided to seek temporary housing, because of how long it took for them to respond to the housing requests,” 23-year old graduate student Pak Ho, said.

Like Ho, who is originally from Hong Kong, hundreds of international students, who are around 27% of residents, were put in a complicated situation, unable to go home, because of travel restrictions, health concerns and fear of not being able to return soon.

“I can’t go back because of the visa issues and travel bans that are already on Iran,” a graduate student who asked to not be identified because he is considering pursuing legal action against NYU, said. “[Getting a visa] was a really, really, really hard process. Now the University is asking me to go home. They didn’t think about it in terms of international students, who don’t have any place here and they can’t go anywhere.”

He found a temporary place to stay, through the help of a coalition of students and the GSOC student-worker union, which dubbed themselves the “NYU COVID Coalition”. In response to the initial memorandum, the group promptly took the role of advocating for students and forming a system to pair up people who could provide any type of housing and students in need.

The Iranian student did get his petition for an exception approved, but still preferred to move out.

Students have noted the generosity they’ve felt from people offering up the homes, either for a place to crash or for storage, and also from the NYU COVID Coalition. Just not from NYU.

“Through my four years at NYU, I’ve gotten a sense that they don’t care about their students,” Nagovitch, who is a fourth-year housing resident, said. “And that was just completely validated.”

Iraj Eshghi, a student worker who is part of the NYU COVID Coalition, said the group is especially concerned about the way NYU handled the process of moving people out, more than the decision to close dorms.

“At least the way it was done for graduate students, was they out of the blue,” he said. “ I wouldn’t entirely blame NYU for that, because it seems like nobody was prepared for this.  But just the way NYU dealt with it was particularly harmful [to students].”

On March 17th, one day after the announcement that housing would be closing, Senior Vice President for Student Affairs Marc Wais sent out a more informal email as a response to the initial backlash. It highlighted how they would now be offering the possibility for students to have their possessions locked in their room, and how only “students who are in day-trip range” should return to campus to pack up their belongings.

It also offered some further explanation as to why students were being kicked out of housing: for their own safety and for the university to possibly be able to offer up its dorms as a state contingency plan in the event of hospitals being overwhelmed.

“I know that some of you may feel that the University should have anticipated this decision earlier,” Wais wrote. “Nonetheless, I can promise you that it is not the case that NYU knew all along that it was going to end up here.”

Pavement Pieces reached out to the Office of Student Affairs, for an interview with Marc Wais, but could not get one in time for this article. The questions sent via email also remain unanswered.

“I understand why they closed residence halls, I understand everything that they explained in the second email,” 22-year-old senior Jana Cholakovska, from North Macedonia, said. “I was mostly upset about the language and the fact that they made it seem like we had known rather than them convincing us that it was all going to be fine. In fact, you know, we were convinced for a very long time that we were not gonna be kicked out”?

Wais talked about the situation in an article published on Tuesday, March 17th, in the New York Times.

“Mr. Wais indicated that many students had not heeded earlier calls to leave their dormitories. ‘Altogether, this was the opposite of what we needed’,” the article said.

But just a few days before, on the 12th, an email from NYU Residential Life & Housing Services stated, “the residence halls remain open at this time, supported by NYU staff members.”

In fact, most students, even resident advisers, said that they were completely blindsided on Monday by the announcement that the dorms would be closing.

But in just several days the spread of the virus continued at an alarming rate. It became clear that dorms could only be used by students who had no other choice.

By the end of the week, some of the students who asked to have their possessions packed and shipped were still struggling to figure out just how that process was going to happen.

Others have raised questions about, for example, who exactly would be doing the move, the number of things that could be shipped and whether there would be an insurance policy. Overall, the lack of information has kept everyone in a state of unease.

“You’re at a point where you don’t know who to talk to,” Nagovitch said. “Instead of answering the phone, a little voice comes up and tells you to go check the coronavirus website for updates.”

A statement put out early in the week by the Inter-Residence Hall Council addressed some concerns regarding the way the housing situation was managed, including the lack of information regarding their decision.

“This was done without any notice to any of the groups that represent or work for NYU Residents,” it said. “We recognize that extreme measures and decisions are increasingly common across the nation, but it should be recognized that consulting students about decisions that impact student housing and well-being will logically create better decisions.”

They also addressed health concerns, regarding the way the university called on their students to go back to housing to get their belongings. Contrary to the recommendations that have been given out by authorities, they advised students to travel back to New York and to come together at the same time in the halls, “almost certainly” leading to gatherings of 10 or more people.

“I completely understand why they did it,” Cholakovska said. “But I think that they put their students in danger when they told everyone to come back immediately and preferably move out within 48 hours. My first fear was, ‘oh my god, this is going to create a bottleneck effect where all of us are going to start moving out in the same at the same time’.”