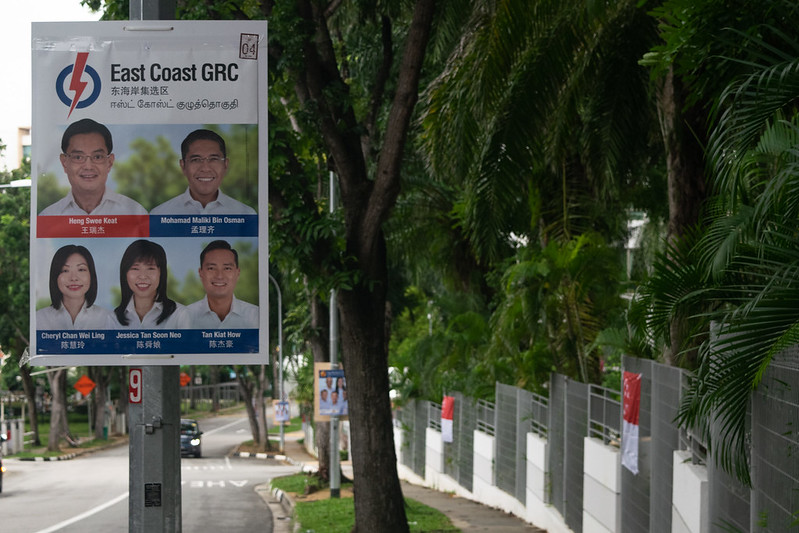 Singapore ruling party’s election poster in one of the key contested constituencies. Photo by Yifan Yu

Before the pandemic, Faizah Said expected himself to be a first-time overseas voter in Singapore’s next election. But now, voting would cost him 28 days in quarantine and the risk of exposure to Covid-19.

While a significant number of Singaporean citizens overseas reside in these cities, those cities, states or even countries away from the nearest polling station feel sidelined in this election.

In many parts of the world, overseas Singaporeans like Faizah are unable to cast their vote. Many have to brave the pandemic, travel to a different state, or even country, serve a 28-day quarantine to make their ballot count. And for those who are working, their overseas employers would never give a 28-day leave.

Said is an international relocation specialist residing in Dallas  and the nearest polling station for her is San Francisco, at least a three  hour flight and 28 days of quarantine away. Apart from the time and inconvenience that comes with voting, exposure to Covid is also stopping Said from voting.

“Right now, America is almost the epicenter of the pandemic,” he said, As much as I am patriotic and I want to do my part as a Singaporean citizen, to vote, do I want to expose myself to the virus? And come back to Dallas to expose my wife to the virus?”

“I can and will happily spend the money to travel to vote, but this already speaks to the degree of financial accessibility overseas voting involves,” Gay said. “With the pandemic I believe it is extremely unwise to be getting on a plane to the US, given how the situation has been handled there to this point.”

But both Said and Gay believe in the importance of their vote. Said had wished to vote for more diversity to represent minority voices in parliament. The 44 year-old identifies as a transman and Malay Muslim and to him, neither of his community is well represented by the current government.

“I’m not saying that my one vote can immediately say, hey, Singapore’s legalizing gay marriage now,” he said. “But I’m saying my one vote can make a difference. It might be the vote that sways things to the right direction.”

Said served 10 years as a police office in Singapore.

“Yet I have to leave my beloved country to find happiness in another country,” he said which has added even more desire to cast his vote.

Since 1972, election periods, only during which parties can campaign, go up to 11 days. While there is no polling day irregularities, the Freedom House notes that “numerous structural factors impede the development of viable electoral competition.”

Gay was set to vote in one of the only two constituencies previously held by an opposition party.

“It goes without saying that I take this responsibility very seriously and this ( the decision to forgo her vote) was not an easy decision to make,” Gay said.

Without the options of online and mail-in voting, Said now finds his only opportunity for equal representation thwarted.

“It’s almost akin to the president here, Donald Trump, saying that there’s no mail-in voting because it might be rigged,” he said.

Inability to vote due to their location and the pandemic is not the only obstacle for overseas Singaporeans to practice their voting rights. A technical “glitch”, according to the immigrations and customs authority’s statement on July 4, failed to process 101 voter registrations overseas. Under the Parliamentary Elections Act, changes can no longer be made after the voter lists are certified.

The Authority said in the statement, that it is making efforts to contact these 101 overseas voters. But some members of a private Facebook group started by overseas voters fear an undercount of affected voters and an impact on election results in key constituencies.

Along with these overseas voters, another 350 eligible voters in Singapore, Covid-19 patients and those issued a legal quarantine order, usually a close contact of a Covid patient, will not be able to vote. Whereas overseas returnees quarantined in hotels can vote with polling agents bringing ballot boxes from door to door.