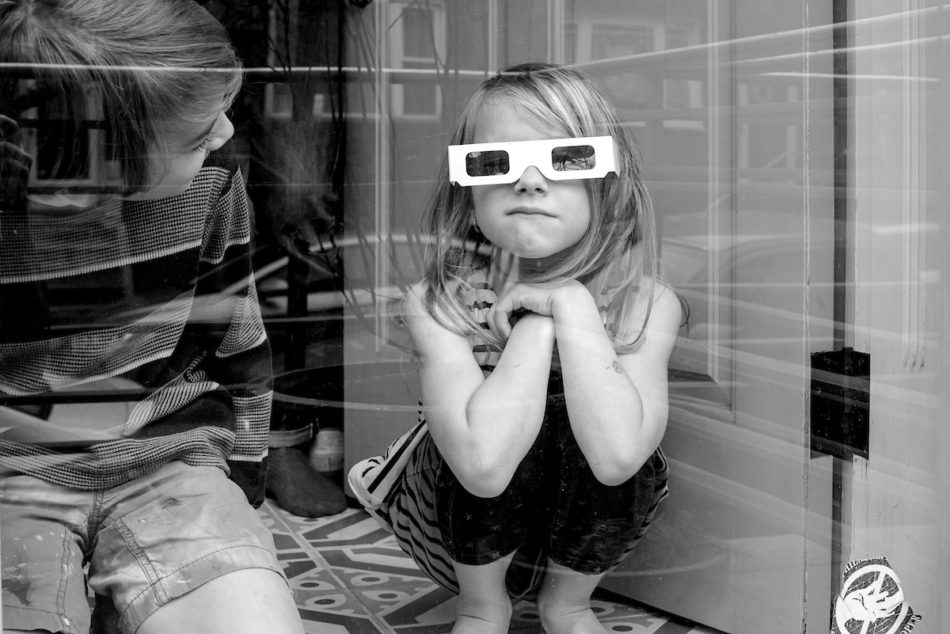 Georgia, 6, looks out the glass door with her 3D glasses on. Photo by Andrea Cipriani Mecchi

A pianist opening his doors to let the neighbors listen in on the melodies, kids writing inspirational quotes on the sidewalk, and a woman with a shopping cart walking towards the supermarket to get to a sale on raviolis. Andrea Cipriani Mecchi has been paying special attention to her neighbourhood of Bella Vista, Philadelphia, while out with camera in hand.

As people adjust to life at home, with the spread of the Coronavirus, the photographer took it upon herself to document the lives of families around her.  She calls the project, “Families at a Distance”.

“I want [the photos] to be real and honest,” she said. “But then I also felt like there almost is a little excitement or a strange way that people are finding this happiness and embracing the fact that everybody’s finally having to be together.” 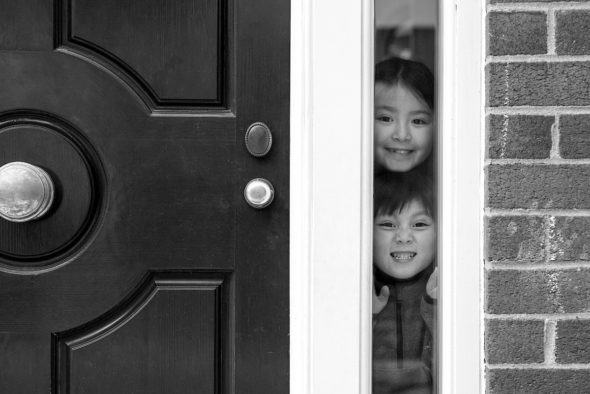 Yet the photographs evoke a historical sense, with their black and white tone and seemingly mundane subject matter. This was not by chance, but by design. Mecchi took inspiration from works such the Farm Security Administration (FSA) style photos, of the great depression era, when the government commissioned a group of photographers to document life in rural America. Of these, Dorothea Lange’s Migrant Mother is perhaps the most recognizable. 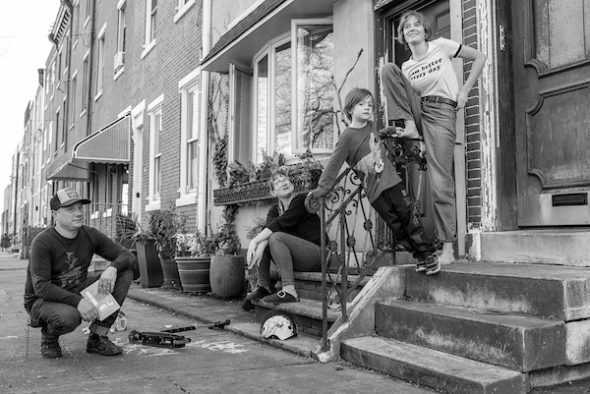 Jeb, Gena and their children, Gigi and Malachy. Photo by Andrea Cipriani Mecchi

“They brought these images back to Washington. And it’s what actually helped shape some of the support that the government then offered the people out West,” Mecchi said. “I really wanted it to feel and sort of mimic, or at least feel consistent with documentary images of the past. There’s this subtle like ‘oh, we’ve kind of been here before or maybe we’re on the verge of this again’.” 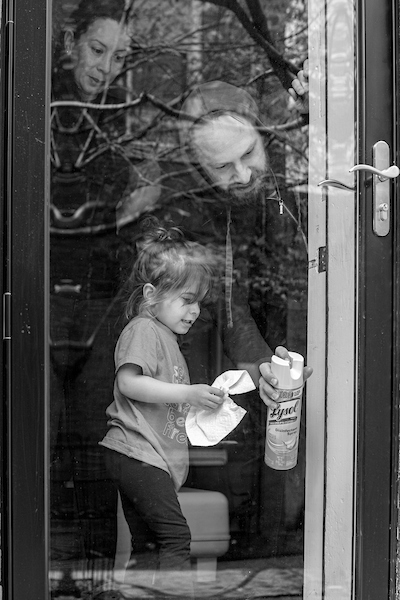 Sofia and her father, Chris  cleans the glass door of their Bella Vista home. Photo by Andrea Cipriani Mecchi

Everyone is adapting to new times. And this project marks a pivotal moment in the artist’s own life and career.

For years, Mecchi kept her photography on the sidelines, focusing most of her attention on raising two children. They have now grown up, and at the end of last year, she decided to reshift her focus back to photography.

“I had loaded my schedule starting in February, and I had some really great projects that I was working on,” she said. “ I’ve always walked the line between doing commercial work and documentary work.” 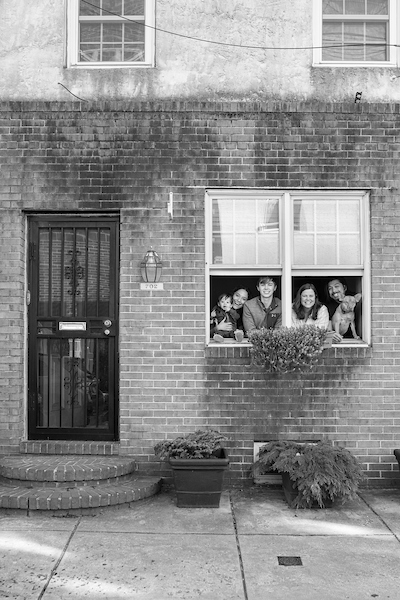 Anna and Rodney  and their  family in the window. of their South Philly home. Photo by Andrea Cipriani Mecchi

But the recent developments in the coronavirus outbreak derailed her plans.

“I ended up losing all my work pretty much once this hit. I started getting emails and calls,” she said. “I was going out to California for a project that was cancelled. I worked for a client that has a national preschool — that was put on hold. I had all of these jobs and suddenly people are working remotely, and obviously I can’t go in and be face to face.”

This took a toll on her.

“I have to be honest, I was pretty much super depressed for a few days,” she said.

Then one day a friend of hers, who is also an artist, challenged her to photograph people “stuck in their homes”. And so a new project was born. Mecchi’s friend and her family became the first subjects, and the initial results immediately struck her. 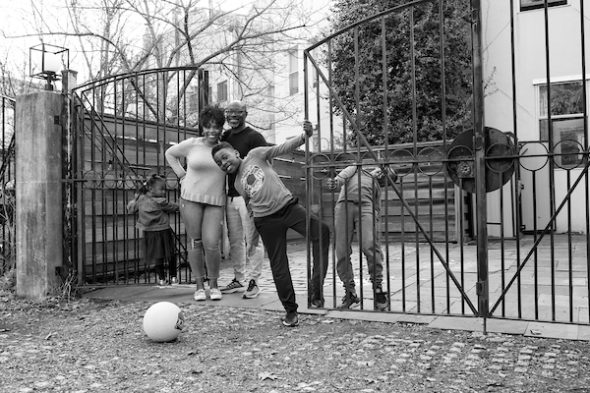 Stacey and Mengistu with their family in Bella Vista. Photo by Andrea Cipriani Mecchi

“They weren’t really sad or depressing or feeling like everybody’s struggling and unhappy, which we all are,” she said. “I kind of sat with it for a bit and tried to figure out why, you know, because internally my own kids are struggling with not being able to interact with their friends.”

Through her lense, Mecchi saw a sense of duality in people’s spirits.

“I feel like people are in survival mode,” she said. “But also everybody right now is embracing this. I do feel like there is a little bit of a pause and everybody is collectively holding their breaths. It sort of allows everybody — the parents, as well — to kind of just be in the moment and realize that there’s also a little bit of a gift at this time, where we really aren’t racing places” 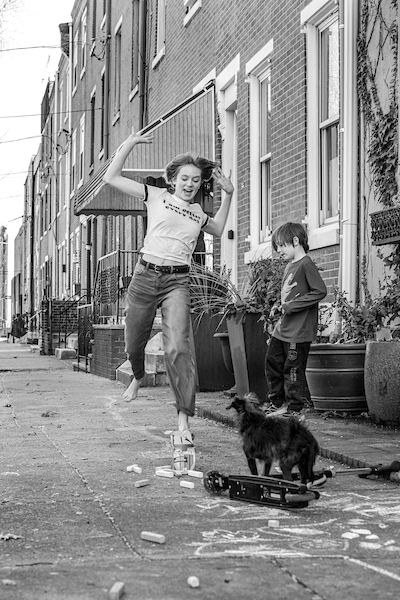 According to the artist, there’s a stark contrast in how different age groups have reacted. Adults are more anxious, while older people seem to “have a little bit more wisdom”. And the kids, while frustrated, easily switch gears to having fun — especially when someone new shows up close to their house, to photograph the family.

After shooting some more of her own friends, Mecchi moved on to people she saw while out on the street to run errands. She makes sure to keep a safe distance from everyone, often shooting them across the street with longer lenses. That’s been made possible also because of the layout of residential neighborhoods in Philadelphia, which has a great amount of row homes, as opposed to high rise buildings. 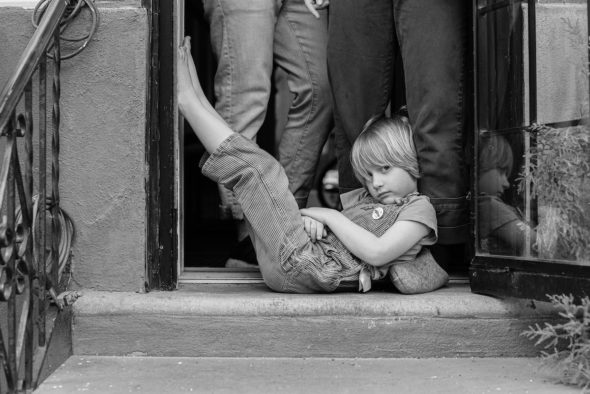 Levi,6, puts his feet up. Photo by Andrea Cipriani Mecchi

The project reached a new level after Mecchi posted about it on social media.

“It was crazy how suddenly I went from, ‘oh my god, I’m not going to work for months’ to my phone blew up after I posted a few images on Instagram like never before with people saying, ‘Oh, my God, I love this, can you come shoot my family?’”

She started accepting appointments to photograph people who reach out, welcoming donations in exchange for the family portraits.

“I need to make money, I need to figure something out to keep my family afloat right now and contribute,” she said. “But at the same time, I feel like this has kind of become bigger than that.” 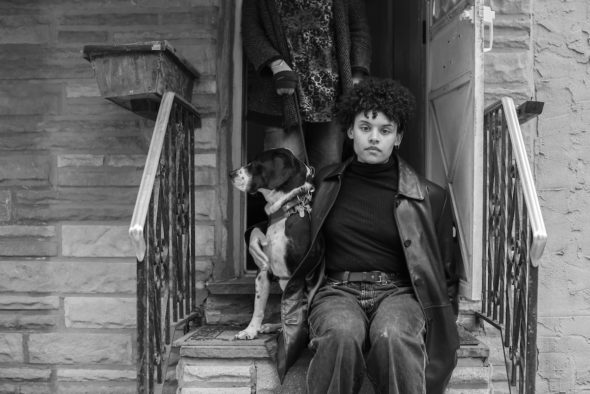 Lu with her dog  on her South Philly stoop. Photo by Andrea Cipriani Mecchi

Moving forward, she wants to make sure the photos she takes are representative of a diverse group of people.

“I want the project to really represent everyone. All socio-economic [status] people and people whose families don’t look like the traditional family,” she said. “When I ask someone to let me photograph [them], I don’t ask for a donation. I definitely am wanting to document things for myself and make it a comprehensive body of work.” 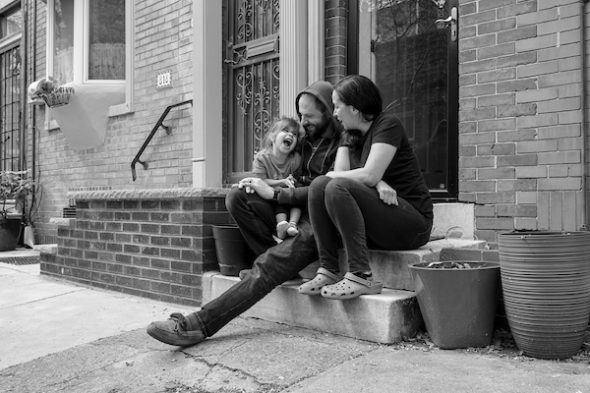 The project has some very obvious physical limitations, seeing as Mecchi cannot walk into people’s homes, being confined to photographing them from the outside looking in. In some of the photos, kids are pressing their faces against the windows, making silly faces, in others the whole family calmly stands together in the front steps. These restrictions have presented both a challenge and an opportunity.

“To a certain extent the boundaries are actually allowing me to sort of stay focused,” Mecchi said. “I’m not searching for the right angle in the house. It really ends up becoming the spirit, in a sense, of the family.”