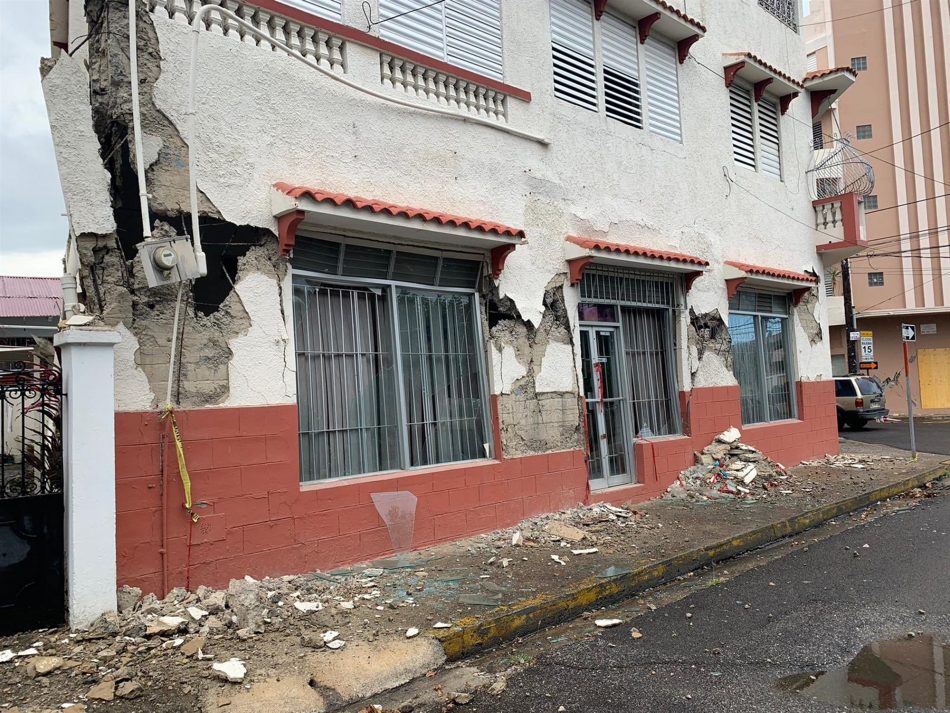 Earthquake damage in Puerto. Photo by A 5.5-magnitude earthquake hit near southern Puerto Rico on Saturday.Mayita Melendez via Twitter and NBC News

A 5.4-magnitude earthquake struck near the southern coast of Puerto Rico this morning, knocking out power and causing structural damages in an area hit by a string of quakes earlier this year.

The U.S. Geological Survey said the earthquake hit at 7:13 a.m. local time at a depth of nine kilometers near the coast of Pueñuelas and Ponce, a region still recovering from previous quakes that destroyed hundreds of homes.

Ponce Mayor María “Mayita” Meléndez said that the city’s center suffered structural damages and that authorities are surveying the area with historic buildings to assess the situation.

“We will keep doing rounds all across the city to assess the structural damage in order to save lives in danger. We are going to keep everyone posted with updates on the current situation,” Meléndez tweeted. “Please, avoid going to the city center until we make sure everyone is safe.”

Meanwhile, Guánica Mayor Santos “Papichy” Seda said no major damage has been confirmed, but noted that this has been the strongest earthquake to hit the region since February, according to local media reports.

The quake was felt in Puerto Rico’s capital, San Juan, and several aftershocks rocked the island’s southern region, including a 4.9-magnitude one.

The earthquake comes as Puerto Rico remains under a nearly two-month coronavirus lockdown. The island today reported its highest number of Covid-19 cases in 24 hours, with 182 new infections. So far, Puerto Rico’s Department of Health has confirmed 1,757 coronavirus cases and 95 deaths.

Gov. Wanda Vázquez Garced reminded citizens to take coronavirus-related precautions if they need to evacuate their homes due to the earthquake and aftershocks.

“If your structure is compromised, you should leave with your face mask on and emergency backpack,” Vázquez Garced tweeted. “Pay attention to any official information.”

Vázquez Garced said rescue crews were deployed to affected areas and asked mayors to prepare reports on damages and to make sure their citizens are safe.

“We continue communication with each mayor in the area to assist them. #PuertoRicoPrimero (Puerto Rico First in Spanish),” she tweeted.

The U.S. territory has been hit by a series of earthquakes since late 2019. In January, a 6.4-magnitude quake rattled the southern region of Puerto Rico, demolishing hundreds of buildings and killing one person. The quake forced thousands of people to live in shelters and government-provided camps. Some still sleep outside as the area has not stopped shaking since.

We are reporting structural damage in the city center after this morning’s quake.

A magnitude 5.5 earthquake struck #PuertoRico's southern coast, near the city of Ponce. We are already doing rounds to assess the situation.#Ponce, I pray you & all your families are safe & well. https://t.co/fTilwhrkWd pic.twitter.com/o9z4MvTxTC