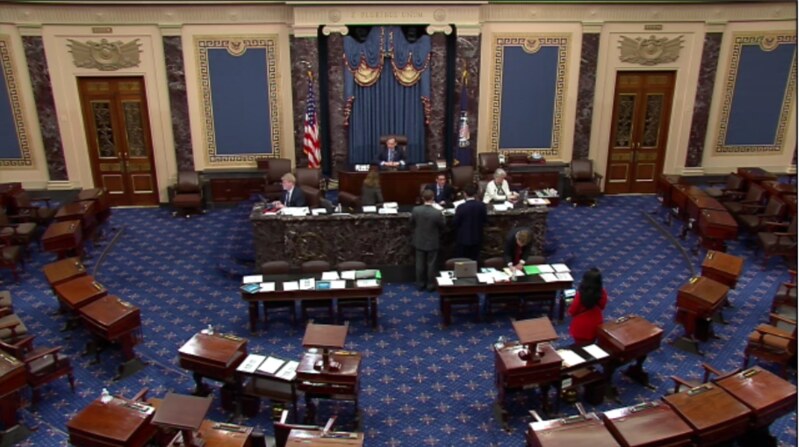 The U.S. Senate voted on a roughly $2 trillion stimulus package on Wednesday just before midnight.

The U.S. Senate unanimously passed late last night a $2 trillion economic stimulus package in an attempt to save the country’s economy amid the coronavirus pandemic, after days of tense negotiations among Democrats, Republicans and White House aides.

The bipartisan bill- the largest rescue package in U.S. history- aims to provide financial relief to companies and Americans losing income, and give critical aid to hospitals and healthcare workers on the front lines of the crisis, as the pandemic hurts the world economy.

“At last, we have a deal,” said Senate Majority Leader Mitch McConnell on the Senate floor around 1 a.m. today  after legislators struck a deal with the White House. “After days of intense discussions, the Senate has reached a bipartisan agreement on a historic relief package for this pandemic.”

Passed just before midnight, the bill would provide direct payments of $1,200 to many Americans, establish a $350 billion loan program for small businesses and allow the Treasury Department to extend $500 billion in loans and guarantees to corporations that have been hit hard by the outbreak.

The Senate had reached a deal with Trump’s administration early yesterday, but voting was delayed until late last night because Republican senators. Tim Scott, Rick Scott, Ben Sasse and Lindsey Graham argued a “drafting error” could lead to layoffs and incentivize people not to work. An amendment from Sen. Sasse to modify unemployment benefits failed to pass.

Among other provisions, the Coronavirus Aid, Relief, and Economic Security (CARES) Act would prohibit taxpayer-backed loans from going to businesses owned by President Donald Trump, members of his administration or members of Congress.

The proposed stimulus package offers unemployed workers $600 a week for four months, includes $32 billion in grants for the airlines, allocates up to $130 billion for hospitals and assigns $150 billion for states and localities battling the coronavirus outbreak.

New York Gov. Andrew M. Cuomo said yeseterday that the Senate bill would be “terrible” for his state’s response to the coronavirus crisis, arguing it is a “drop in the bucket” of what New Yorkers need. He said the legislation would provide $3.8 billion in aid to New York, compared to a plan unveiled by the House earlier this week that would allocate $17 billion for the state that has confirmed more than 30,000 cases of the virus.

New York City Mayor Bill de Blasio, at a news briefing yesterday afternoon, called the bill “just immoral” and said the city would only get $1 billion, despite being the epicenter of the outbreak in the U.S.

The U.S. reported 54,453 cases of Covid-19, the disease caused by the novel virus, with 737 deaths, as of Wednesday afternoon, according to the Centers for Disease Control and Prevention. The World Health Organization on Monday warned that the U.S. could become the epicenter of the coronavirus pandemic.

The Senate struck down two previous stimulus bills, as Democrats pushed to make several changes to the legislation. Democratic senators fought, for example, for worker protections and oversight of the $500 billion fund to bail out businesses. They also insisted on prohibiting funds from going to Trump’s businesses.

“It was a long hard road,” said Senate Minority Leader Charles E. Schumer last night on the Senate floor. “Neither side can be completely happy with the final product. But it will be worth it.”

Treasury Secretary Steve Mnuchin said during a White House press briefing that the stimulus package could keep the U.S. economy afloat for three months and mentioned the government expects to issue direct payments to citizens within three weeks of the bill being signed into law.

On Tuesday, Trump pressured legislators to pass the bill. “Congress must approve the deal, without all of the nonsense, today,” tweeted Trump. “The longer it takes, the harder it will be to start up our economy. Our workers will be hurt!”

During a Fox News town hall, Trump said on Tuesday he wants the country “opened up” by Easter, April 12, despite public health experts’ warnings on the dangers of the outbreak. He said, if some sectors of the economy are not restored, the country might go into “a massive recession or depression.”

The bill now needs the House’s approval before it reaches Trump’s desk. The president has said he will sign the bill if it is passed by Congress.