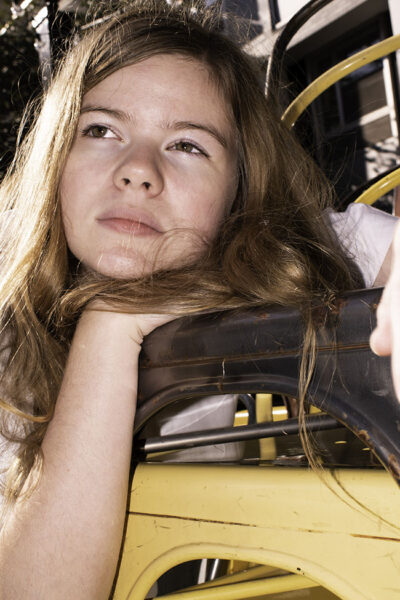 Orla Bordeaux has used Tinder to match with people all of the world during quarantine.

Orla Bordeaux had another match, this time with Metin from Turkey. His profile said he was 19 and 5,265 miles away from her dorm room in Greenwich Village. There was nothing in his bio except for his Instagram and Snapchat handles.

Within minutes of matching, 19-year-old Bordeaux got a message from Metin. It was a GIF of a tiny white dog with the word “hi” in black letters in the right corner.

Bordeaux has been matching with people from all over the globe since Tinder made its Passport feature free last month to help singles combat loneliness during the coronavirus pandemic.

The feature allows users to connect with anyone anywhere in the world instead of limiting matches to people in their vicinity.

“Our hope is that you use the Passport feature to virtually transport yourself out of self-quarantine to anywhere in the world,” Tinder said in a statement. “You can check in on folks in their hometown, college town, or sister city, and find those across the world who are going through the same things. If nothing else, you can learn how to say “hey” in another language.”

But Bordeaux never learned how to say “hey” in Turkish.

“My experience was — well, he was sort of clingy,” said Bordeaux, who ultimately ended up blocking her potential beau.

With the stay-at-home mandates all over the world,, some dating apps have seen serious spikes in activity.

The volume of direct messages on Tinder has increased by 10 to 15 percent each day, according to Mother Jones. The dating app  also reported that conversations tend to carry on longer than they did before the lockdown.

“It’s nice conversation but it’s different to how it was before because everything before was like you know we talk for a bit and then I’d see the person within two weeks,” said Chelsea du Toit, 20, who lives in  Cape Town, South Africa.

Du Toit had not activated the Passport feature — but she figured others were using it when she started seeing people from the US, Germany and the UK show up in her profile.

“It kind of irritated me at first,” she said. “I guess, this will make me sound ridiculous, I didn’t really want to talk to people or match with people if I won’t potentially meet them in real life. That just kind of feels like a waste of time.”

She started using Tinder when quarantine first went into effect, and had expected to meet up with her matches fairly soon — but that changed once it became clear the lockdown would last much longer.

“Initially South Africa had a lockdown that was only meant to last three weeks,” said Du Toit. “So a lot of the conversations were with the idea that we’re possibly seeing each other within like a month.”

“Now it’s very much like, we’re getting to know each other and speaking to each other but we don’t know when we’re going to see each other,” she added. .

As quarantine begins to lift in some places, some wonder if they will finally get to meet their matches — and if the flirtatious banter that grew stale online will be better in person. .

“I’m planning to meet up with [one of my matches] after the crisis,” said Du Toit. “When everyone gets a better idea [of when] we’re going to be able to see each other, conversations will probably pick up again.”

Bordeaux said she also plans to meet one of her matches after the quarantine.

“There’s one person who I’ve stayed in contact with. Possibly two,” she  said.

“I’m a little nervous to [meet up] cause all of our relationship and our talking has been texting and I’ve also never met up with someone from Tinder before,” said Bordeaux. “But I would like to meet up with him.”