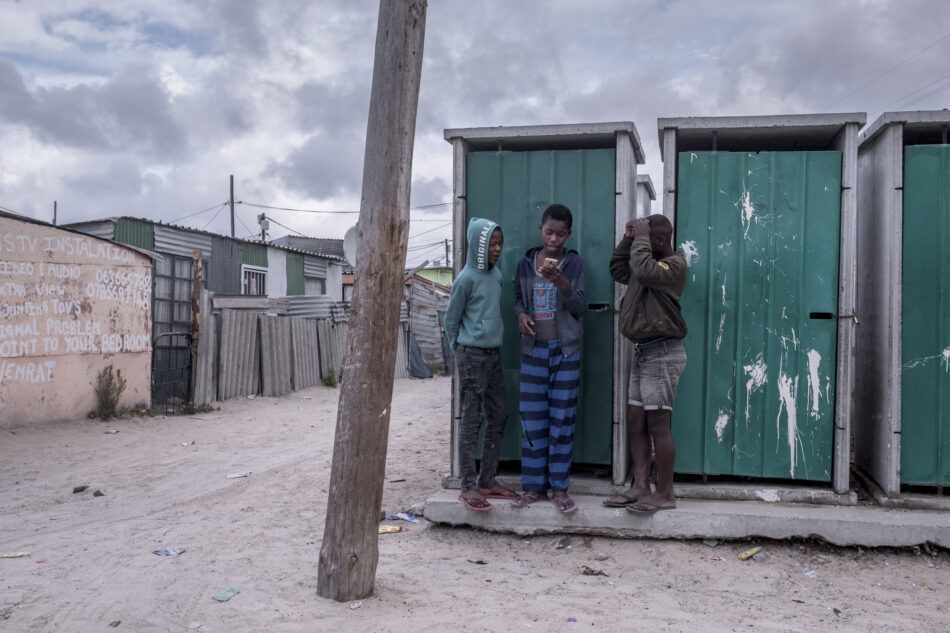 Many South Africans share toilets in overcrowded townships, such as these in Khayelitsha township in Cape Town, South Africa. Photo by Tommy Trenchard

For almost seven weeks, the South African government has enforced one of the world’s strictest lockdowns. In a country already rife with unemployment and poverty, the economic impact has been vast. But lockdown conditions have also further exposed the country’s vast inequality and racial divisions.

It has been 26 years since the end of apartheid, a system of racial segregation enforced in South Africa for 40 years. Yet the country remains the world’s most unequal, with the majority of the country’s land and wealth owned by its minority white population.

Lockdown has brought this lingering inequality to the forefront as South Africans of different economic levels complain about different aspects of their lockdown experiences.

South Africa remains one of the most unequal countries in the world. On the left, shacks in the informal settlement of Khayelitsha. On the right, houses overlooking Llandudno beach. Both are in Cape Town. Photo by Tommy Trenchard

Affluent and predominantly white South Africans, confined to comfortable and spacious houses, have complained of restrictions on outdoor exercise such as jogging and surfing.

For the first five weeks of lockdown, no outdoor exercise or walking of dogs was allowed. Now, walking or jogging is allowed from 6 a.m. to 9.a.m. , but beaches and the ocean remain off limit. Some say that this three hour limitation is arbitrary, and serves only to create crowding on public running paths and oceanfront promenades.

“I thought that yoga was an okay exercise,” said tearful Samantha Vietri after being reprimanded by police for doing yoga on Muizenburg Beach.

“They didn’t even want to give me time to put my shoes on, she said. “It was just a horrible experience and not a way that people should be treated”. 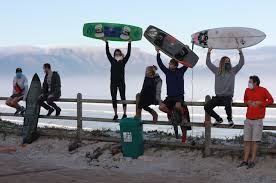 Surfers protest at Blouberg Beach, Cape Town against the South African government’s banning of surfing during the COVID-19 lockdown. Photo by Nardus Engelbrecht.

“To us, surfing is more than just being in the water, it’s a culture,” said Surfer Anton Fourie “ And not being able to surf is torture.”

But for millions of impoverished black South Africans, yoga and surfing are the least of their worries. For those confined to small shacks in overcrowded townships or rural villages with poor lighting, no electricity and communal toilets, hunger has been the most difficult part of this lockdown. Initial studies have estimated that 34 percent of South Africans have gone to bed hungry since the lockdown began.

Many of these people live day to day, surviving on day wages received for casual labor. Since lockdown began in March, these people have been without income. Without income, hunger has set in, and there have been incidents of looting and theft from local grocery stores and food delivery trucks.

“I’m not earning anything now,” said Thandi Lebho, who lives in Diepsloot township with her husband and three children.

“I’m starving now. I don’t have anything, she said.”

In some areas, hungry people wait for food handouts in lines that are over two miles long. The South African government is providing food parcels to some South Africans, but government officials have been accused of bribery and nepotism in the provision of these parcels. Some immigrants have also complained that they have been denied food parcels because they are not South African citizens. As a result, millions of South Africans are not receiving any food assistance.

“If the government cannot give us food parcels as promised, it should scrap the lockdown and let us go back to work and hustle for our families to eat,” said Nonkikelelo Mceki, a domestic worker living in Tsakane who has been out of work since the lockdown began.

Some South Africans have started handing out food parcels to the hungry. But without a special permit, this is considered a violation of lockdown restrictions. 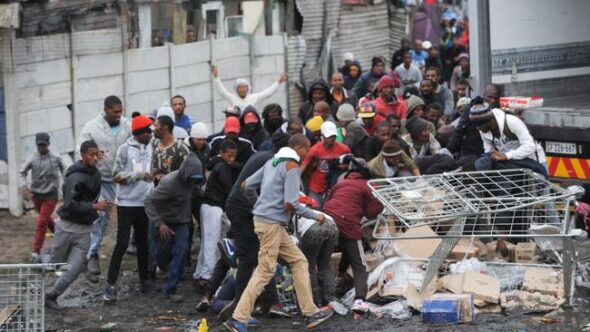 Many have criticized the government’s strict lockdown rules, including the prohibition of the sale of alcohol or cigarettes for almost seven weeks, as being irrational, arbitrary, and brutally imposed.

Former finance minister Trevor Manuel, is among those who say that lockdown restrictions have been too harshly implemented.

“There are daily reports of the abuse of power by the security forces, including assaults with sjamboks [leather whips]; the arrest of citizens for the pettiest of infractions; the payment of admission of guilt fines by people desperate to get out of custody, and a long list of instances of misbehaviour,” Manuel wrote.

But the government has defended its strict restrictions as a means of saving lives.

“Imposing a nationwide lockdown gave our country a strategic advantage,” said President Cyril Ramaphosa in a recent national newsletter. “It bought us valuable time to prepare our health system and put in place containment measures. This has slowed transmission and saved lives.”

According to the South African Department of Health, there have been 10,652 COVID-19 infections confirmed in South Africa, with 206 deaths. Although the infection rate remains low compared to those in other countries, some are concerned that the actual infection rate may be far higher, given that only 6,004 tests have been conducted per million people.

The infection rate has also been increasing sharply and is expected to worsen during the winter months from May until August, when it is expected to reach a peak.

“The coronavirus crisis will pass,” said President Ramaphosa. “But for as long as it remains a threat to the lives of our people, we must remain vigilant, diligent and responsible. We will need to adapt to new ways of worshipping, socialising, exercising and meeting that minimise opportunities for the virus to spread.”