Stuck in “Groundhog Day?” Embrace it. 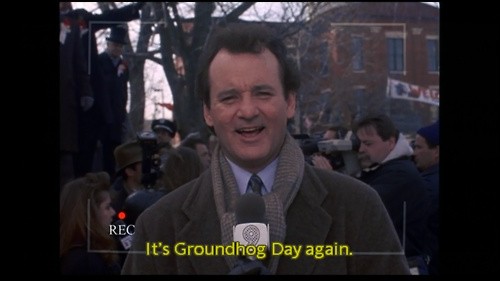 Raise your hand if you also promised yourself that you would use quarantine to finally go through your Netflix list and watch the movies half the world has seen but you haven’t because you just “didn’t have the time” before. In my second (or was it my third? I lost track) week of self-isolation, I was looking for something to take my mind away from this confinement mess and came across “Groundhog Day” – the 1993 comedy classic starring Bill Murray as a cocky TV weatherman who ends up reliving the same day over and over and over again.

The film, directed by late “Ghostbusters” writer Harold Ramis, has been dubbed the perfect quarantine movie. Or the worst, depending on how you look at it. Since its release, the title has become an expression of its own and has been referenced in dozens of articles over the past month. Esquire gave tips on how to avoid feeling like you’re stuck in groundhog day while social distancing and even Jeep re-edited its Super Bowl commercial with Murray himself back in character with a message for these uncertain times.

To be fair, it’s hard not to draw parallels between whatever piece of entertainment we consume and the general situation we’re inserted in. I’d say it’s human nature. However, all those articles are missing an important point. “Groundhog Day” is not just a movie about a man living the same day again and again for – what some people speculate – over 30 years. It’s about how he’s able to make the most out of the situation and use this time to grow.

The movie introduces us to Phil Connors (Murray), Pittsburgh Channel 9’s weatherman who is also in charge, for the fourth year in a row, of covering the traditional Groundhog Day festival in Punxsutawney – an assignment, he makes no effort to hide, he absolutely dreads. This time around, he’s accompanied by Rita (Andie MacDowell), the new producer, and Larry (Chris Elliott), the cameraman.

After Connors wraps up his weather broadcast, in which he confidently reassures viewers they can “leave their galoshes at home,” the trio heads to the small town to cover the festival the following morning.

On February 2 at 6:00 a.m., the radio alarm clock in Connors’ hotel bedroom blasts Sonny and Cher’s “I Got You Babe” for the first time. He exchanges some words with another guest and with a lady at the hotel diner and, eventually, meets up with the TV crew at the festival.

Each has a different mood about covering Groundhog Day; while our main character is sick of it, Rita faces everything with cheerful enthusiasm and Larry, well, he’s basically just trying to deliver witty comments about everything Connors does.

After the announcement that Phil – groundhog Phil – has seen its shadow, meaning six more weeks of winter, they’re ready to travel back home, but can’t: all roads are blocked because of a blizzard. Yes, the same one that Connors said wouldn’t hit the area. Oops.

“What blizzard? It’s just a couple of flakes,” the weatherman tries to convince the traffic officer, unsuccessfully. Forced to stay in town, Rita and Larry invite Connors to a dinner party, to which he declines saying he just wants to take a hot shower and go to bed.

By the end of day zero, the original “groundhog day,” we learn that the protagonist is a plain jerk, claiming special treatment for supposedly being a celebrity (he’s not) and treating everything with a big eye-roll attitude. And if you have been paying the minimum attention to the movie (and not scrolling through social media on your phone), you can probably pick up on all the quirky lines foreshadowing its main plot – “Do I want to stay for an extra second in Punxsutawney? Please,” Connors says in the opening scene.

As we follow the multiple repetitions of that day unfold, the various parallels between the story and our new warped reality become more evident. Obviously, not only Connors is confined to Punxsutawney, he’s trapped in a seemingly never-ending loop, in which every day looks the same. There’s only so much he can do with the resources available – although having a whole town with people to interact with sounds much better than being alone in a tiny apartment.

The phases that the main character goes through also seem very familiar. At first, he’s understandably confused by what’s happening. By the third loop, he’s experiencing despair, quickly replaced by something that resembles an excited acceptance, which he channels through taking advantage of the town’s residents in various ways and devouring pastries like there’s no tomorrow.

At some point, he starts to take Rita on dates that always fail after she realizes he’s still the same conceited guy from the day before – Connors is the only one aware of the repetitions. He then enters a deeply depressed, somewhat nihilistic stage: the pastries give way to binge-drinking and pajamas become his new uniform. Nothing matters, so why bother?

Then, something about his attitude changes, as if a switch was flipped, and he decides to read more books and master a range of new skills, from throwing cards to playing the piano to ice-sculpting. Of course, that phase isn’t permanent, either. After being so invested in improving his own life, he’s finally brought back to reality – well, his new reality – and finds out about all the tragedies happening in the other residents’ lives that he has been missing this whole time.

In contrast, it can be hard to find excitement these days when you have no choice but to be stuck in the same place for weeks. From the start, many people were downplaying the current situation – “It’s just the flu!” – and displaying attitudes such as “I’m young and healthy, it won’t get me,” or “I’m an important person, those rules don’t apply to me.” I’ll admit Connors’ “People are morons” line is more relatable than I’d wish it were.

The “nothing matters” vibe might be hovering over us most days; who cares if I’m not wearing pants or if I give myself a bad haircut? Eating a whole pie by myself doesn’t sound like a bad idea, either. For how long has this been going on? Are deadlines still a thing?

After hours (or days) of self-absorption, you finally decide to check out what has been going on in the world. Muting every keyword related to the situation on social media is a nice way of escaping the flood of news that keeps coming all day, every day. But, at some point, you have to inform yourself. And the news isn’t that good.

Despite all of your efforts and days of isolation, people are still getting sick and many are passing away. Confinement is leading to higher cases of domestic abuse and invasive thoughts. Many people just can’t work from home and others don’t even have a place to call home. It’s still hard to find toilet paper.

I’m doing what’s within my reach. But is it enough?

Connors does what he can to make some of the residents’ lives better. By doing that, he becomes a better person himself. He becomes revered in Punxsutawney, delivers beautiful speeches about the groundhog and even enjoys the dinner party he had at first scoffed at. He learns to do things for the benefit of others and not just for himself. The time loop is finally broken.

And that’s one of the most important – albeit cheesy – messages from the movie, especially in a time like this. We can lock ourselves at home, worry about our own health and that of the people we love and try not to care if others are still going out and about and inviting people to their place. If they want to get sick, that’s their problem, after all, right?

Or we can come to the realization we’re not doing this just for our family and ourselves. We’re doing this for those who, for some reason, can’t. It’s not just about you not getting sick, it’s about your upstairs neighbor who you’ve only seen twice not getting sick; it’s about the old lady in the supermarket who might hold the contaminated handrail just ten minutes after you’ve covered your sneeze and unconsciously touched it.

Many other works of fiction have explored the journey of a character who’s stuck in a time loop that is only broken when he or she becomes a better self. In fact, the second silver screen adaptation of “12:01,” a science-fiction story based on that premise, came out the same year as “Groundhog Day,” with writers and producers threatening to sue Columbia Pictures for plagiarism. However, “Groundhog Day” is able to do it in such a genuine unpretentious way that could have easily fallen into tackiness, but didn’t. The movie is able to make fun of itself while also reminding the viewer of much simpler times. Also, I’ll take anything with Bill Murray in it, so it’s definitely worth a quarantine watch – or two, or three.