Tavern dishes out food, beer and thanks to truckers 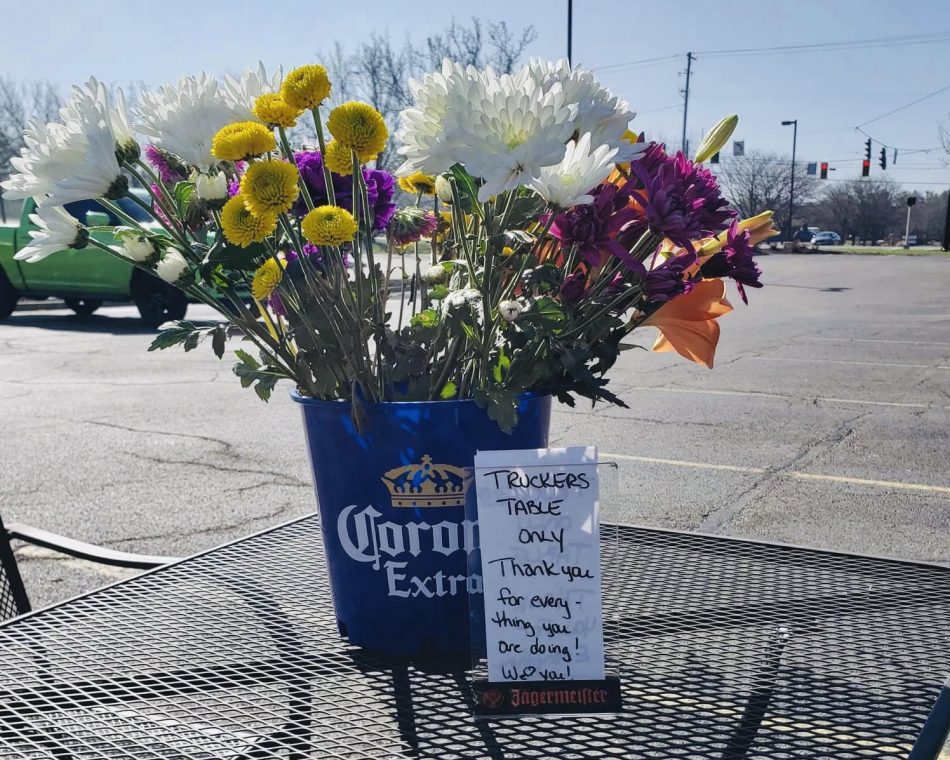 A floral display thanks truckers who are essential workers during the pandemic.

A single metal table in an empty parking lot outside of Mack’s Tavern featured a blue Corona Extra bucket filled to the brim with wildflowers and lilies. Beside the plastic pail was a handwritten note: “TRUCKERS TABLE ONLY. Thank you for everything you are doing! We (heart) you!”

Truck drivers — essential workers that have continued to deliver goods during the coronavirus pandemic — have pulled into this lot in Centerville, Ohio since late March to grab anything from burgers to pulled pork cooked by Mackenzie Manley, owner of Mack’s.

“My parking lot is huge and empty,” said Manley, whose bar sits in a strip mall with a lot large enough for semis to easily enter and exit. “We’re only 2 miles off the highway… and we get a bunch of supply trucks going by.”

“I tried to make it look nice and homey,” she added. “I even write jokes on [the] pizza boxes.”

Since Manley first opened the tavern in February 2015, she had kept late hours, offering drink specials and a sizable space for patrons to watch sports and play darts or pool.

But after Ohio imposed a mandatory quarantine last month, Manley has had to change the way she does business. She had seen Facebook posts about drive throughs that wouldn’t allow large vehicles, and quickly got to work setting up a station to service truckers. She now closes six hours early and only has two employees scheduled to work per day—one to cook, and another to run food out and sanitize the table between customers.

The bar turned curbside food joint also features a new best-selling meal for Centerville’s locals: the take-and-bake pizza that customers can finish cooking at home. They can add on a 24 pack of beer too, which Manley sells at the state minimum to compete with surrounding grocery chains. 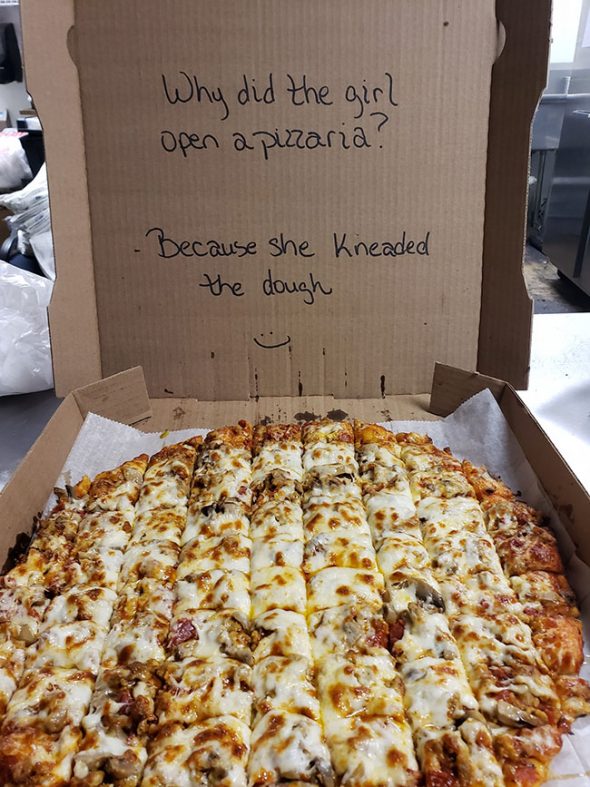 Pizza and a joke for Truckers and others who stop by Mack’s Tavern in Centerville, Ohio.

A large part of her success comes from the bar’s Facebook page, where frequent posts encourage people to stop by for a burger and chips.

“The response is overwhelming,” Manley said, who has even received some hand-drawn thank you notes from kids who live in the area. “We’ve got quite a few customers that have come here because of that post that have never been here before.”

Despite the outpour of support, Manley worries about the future of her business.

“What am I gonna do? We’re not a food place. We sell the food to keep people here drinking,” she said.  “We don’t make a profit.”

“I’m just gonna stay open as long as I can so my employees have money to pay their rent,” she added. “And then the day we say we can open… I am opening at 5:30 a.m…. And I am going to have one heck of a party.”