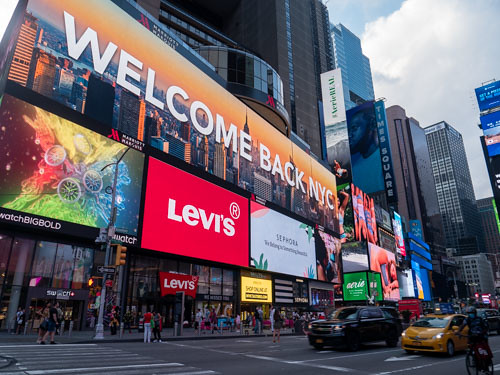 As New York City entered its third phase of reopening, much of Times Square remains a shadow of its former self, but its big screens continue to illuminate during the city’s worst times.

But gone are the exuberant tour ticket vendors persuading visitors to buy a double decker bus tour. Those jobs were lost as tourism is virtually non-existent. For the past seven years, Ademuyiwa Onitiri worked with TopView sightseeing tours selling tickets for their double decker sightseeing bus before the lockdown.

‘‘There was one day I drove past Manhattan and I felt like oh my God, I miss Times Square,’’ said Onitiri.

His last day in Times Square was in March, shortly after everything was shut down as coronavirus cases rose.

‘‘It’s not mostly about missing Times Square, but the income…as well, he said. “ I miss the activities .I miss the side attraction, the performances.”

Olayinka Oloruntimilehin is a colleague of Onitiri who also worked with TopView . She has been selling tour tickets since 2018 and laments that it’s a ‘different world for them’.

‘‘I had colleagues that applied for unemployment on the 17th (March) as soon as they put it on the (notice) board, no work no work,” she said.”  I thought it was going to be like the president was saying, ‘it’s a flu, it’s going to vanish.’ I believed that and then two weeks, one month, two months, three  months ( passed).’’

Before the coronavirus outbreak, Onitiri said he spoke to an average of 100 people daily.

But with no tourists in sight, these two ticket vendors, both of Nigerian origin, have been out a job.

‘So basically, I have been looking for something else to do, like another job,’’ said Oloruntimilehin.

Onitiri said he had to apply for unemployment to make ends meet.

‘‘It’s just not very easy, especially when the bills are not going to wait, they keep coming,” he said.” I have been living on savings and even it’s depleted to almost  zero. So, seeking government assistance for now, which I have never done before, because I like to earn my living.’’

However, it’s unclear if there will be tourists by then with international flights still restricted and a 14- day mandatory quarantine in place for persons travelling to New York from other states with high corona infection rates.

In his briefing on Monday,  Gov. Andrew Cuomo said they have had new infection cases coming from other states.

‘‘We are already seeing it,” he said. “We have had significant clusters with people if people came out of state. They came in, they attended a function, bang! The next day we have an increase in the infections. We’re doing so many testing and so many tracing that we can trace it back to patient zero and they are very often from out of state.’’

The tour ticket vendors believe people will be scared to come to the city.

‘‘Everybody hears about New York City and they are very afraid to come to the city because it was  the epicenter of the Covid-19,” Ontiri said. “So because of that people are scared to come.”

He said he has friends from other states who are wary of coming to the city.

‘‘ I have some folks, some friends that are living in other states had hitherto the ambition to come to the city to have fun,” he said.  “But right now everybody cancelled it and I’m sure it would be like that for some other people too. So, it’s not going to be business as usual for now.’’

In 2019, 66.6 million visitors traveled to New York City for business and leisure trips according to NYC & Company’s annual report.   Eighty percent were domestic tourists while international visitors made up 20%.  They generated close to $70 billion in revenue.

Oloruntimilehin said it will be impossible for an out of state visitor to manage the lengthy quarantine required in same cases and still have vacation time left  to enjoy the city’s available attractions.

“For me the basic things we do as ticket sellers we won’t be able to do it,’’ said Oloruntimilehin.