Trump attacks governors again in the midst of the pandemic 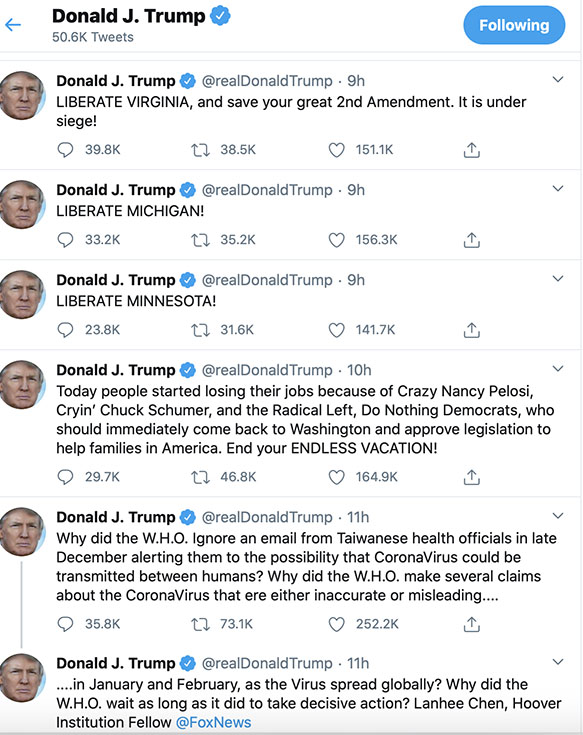 President Donald Trump was on a Twitter rampage today attacking governors, Democrats, The World Health Organization and others.

President Donald Trump continued his feud with the governors today.

It began with tweets stoking the flames of protest against stay at home orders.

“LIBERATE MINNESOTA”, “LIBERATE MICHIGAN” “LIBERATE VIRGINIA, and save your great 2nd Amendment. It is under siege!” Trump  blasted on twitter siding with protestors who have demanded the end of restrictions to battle the deadly virus.

But the governors  are following the White House guidelines released last month and called, “The President’s Coronavirus Guidelines For America.”

Trump then got into a war of words with Governor Andrew Cuomo, whose state is the epicenter of the virus.

He  accused Cuomo on Twitter of complaining and not taking action after  Cuomo said the government should assist in large-scale testing.

Governor Cuomo should spend more time “doing” and less time “complaining”. Get out there and get the job done. Stop talking! We built you thousands of hospital beds that you didn’t need or use, gave large numbers of Ventilators that you should have had, and helped you with….

Trump continued with his tweets.

….testing that you should be doing. We have given New York far more money, help and equipment than any other state, by far, & these great men & women who did the job never hear you say thanks. Your numbers are not good. Less talk and more action!

During his press conference Cuomo said that New York has applauded the government for their aid.

“I have said repeatedly that the president moved very quickly,” he said. “He brought the engineers to build the Javits Center. He’s wrong that it hasn’t been used, about 800 people have gone through Javits. To dismiss 800 people, is disrespectful.”

The number of hospitalized virus patients has fallen by 1,500 statewide, but the number of people entering the hospital is still high. In New York, almost 33,000 people have been hospitalized and a total of 16,000 deaths. Nearly 700,000 coronavirus cases have been identified in the US.

Cuomo announced an executive order directing public and private labs in New York to coordinate with the State Department of Health to prioritize coronavirus testing. This allows laboratories and hospitals in the state to coordinate and overcome testing challenges that the rest of the nation is facing.

Cuomo repeated that reopening the economy safely is dependent on help from the federal government and an increase in testing.

“We need a federal partnership to ramp up the testing,” he said. “The federal government can’t wipe their hands of this and say states are responsible for testing.”

Cuomo has extended PAUSE for New York until May 15. Cuomo said that reopening the economy, referencing Trump’s initiative “Opening Up America Again”, will not work in states that still have large rates of infection.

“You will see the states that have less of a problem opening sooner,” he said. “The states that open first will have much lower infection rates than we do.”

Cuomo repeated that it will be the decision of state governors as to when to reopen their economies.

States like Minnesota, Texas, and Vermont have announced dates of easing restrictions.

But in New York, Cuomo has extended stay-at-home orders. He has also ordered residents to wear masks in public starting tonight. This has also been initiated by other governors in states like California.

“We have built sufficient testing capacity, nationwide. You will hear a lot about reopening in the coming weeks,” he said. “Earlier this week, the FDA announced new antibody tests. Bringing the total to four  antibody tests already, showing how we can get Americans back to work.”

President Trump is pushing to reopen the economy since jobless claims have reached 4 million in the last month.

But Cuomo said that it will be too soon for some states.

“When this virus is totally controlled, that could be 12-18 months, maybe it will be sooner,” he said. “You open too fast, you bring people out too fast, we will get right back to where we started.”