Trump continues to blame WHO for pandemic 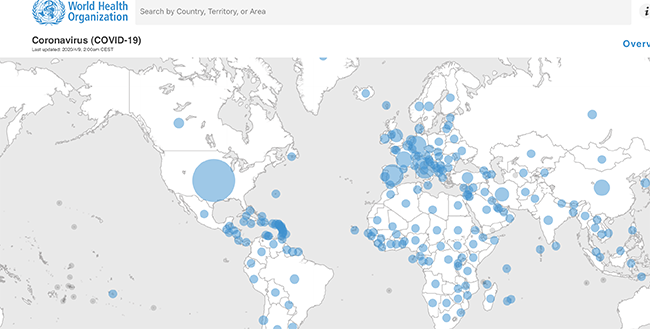 The Who world map depicts countries hit hard by the pandemic.

President Trump defended his decision to withdraw funding from the World Health Organization in the midst of the organization’s battle against the coronavirus, in a press conference today.

The President accused the WHO of focusing its response to the virus on China, despite the fact that the US last year donated far more to the organization than China did.

“Everything was China-centric,” said  Trump. “China spends 42 million, we spend 450 million and everything seems to be China’s way. That’s not right, it’s not fair to us and honestly it’s not fair to the world”.

Trump also blamed the WHO for initially downplaying the seriousness of the coronavirus, and being wrong in their early advice regarding the virus. Although the WHO only declared the virus to be a pandemic on March 11th, it described the virus as a “public health emergency of international concern” on January 30th – indicating that it was an international threat not just limited to China. On February 4th, the WHO escalated this classification to an epidemic with multiple locations.

But  Trump continued to dismiss the virus’s seriousness as late as February 27th. This was despite a White House Memo presented on February 23rd showing a projected infection of 100 million Americans and 1 to 2 million deaths.

The memo, which was published on Tuesday, was prepared by White House trade advisor Peter Navarro and labeled “MEMORANDUM TO PRESIDENT”. It was sent through the National Security Agency, then-acting Chief of Staff Mick Mulvaney, and the COVID-19 task team. Today Trump denied having seen the memo in February.

Trump continued to advocate for the use of anti-malaria medication hydroxychloroquine in treating the virus. This is despite Dr Anthony Fauci, Director of the National Institute of Allergy and Infectious Diseases, having warned that there is no evidence to suggest that this medication is effective in treating COVID-19.

While testing has been limited, the FDA has reported serious side effects from the drug including irreversible retinal damage, cardiac arrhythmias, muscle weakness, severe drops in blood sugar, hallucinations and harmful interactions with other medications.  President Trump said that 30 million hydroxychloroquine pills were being released to treat the virus.

According to data from John Hopkins University Center for Systems Science and Engineering, there are currently 429,052 people infected with COVID-19 in the USA, more than any other country. President Trump today attributed the country’s high number of infections to the fact that testing has been more extensive in the USA than in other countries.

However, according to Worldometer Coronavirus statistics, the USA ranks 44th in the world when it comes to the number of tests administered per million residents.