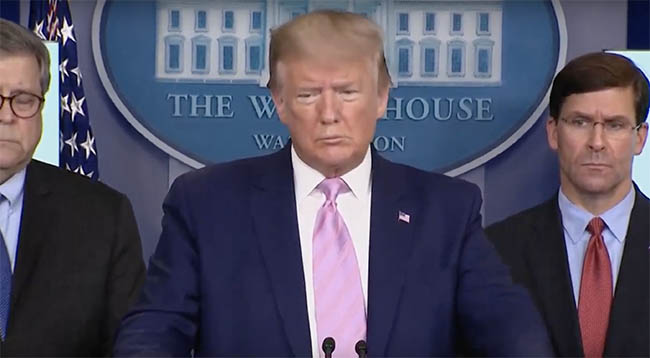 President  Donald Trump said he still has no plans to implement a national “stay at home” order to states that have not mandated the rule.

“There are some states that don’t have much of a problem,” Trump said during today’s press conference. “They don’t have thousands of people that are positive.”

Coronavirus cases are surging in places like New Orleans, Detroit and Southern California, with New York hit the hardest among them all.

“It’s awfully tough to say, ‘Close it down,’ if they don’t have a problem,” Trump said. “We have to have a little bit of flexibility.”

Experts warned that there could be 100,000 to 240,000 deaths in the U.S. even if social distancing guidelines are maintained. America now has more than 4,000 dead from the outbreak.

The coronavirus has infected more than 213,000 people in the state as of this morning.

New York Gov. Andrew Cuomo said in his press conference today that  391 New Yorkers have died in the past day of coronavirus, bringing the state’s total to1,941.

He presented a model projecting 16,000 deaths in the state before the pandemic ends.

Cuomo said there will be more testing available in New York, with companies like Regeneron which is creating 500,000 test kits at no charge.

He  also expressed his worry for his brother, CNN anchor Chris Cuomo, who tested positive for the virus.

“It is frightening because there is nothing I can do,” he said. “And I am out of control. And this situation can be the situation for everyone.”

As the crisis has grown more dire across the country, Cuomo again emphasized the regional coordination between states nationwide.

Cuomo said Americans would live with the consequences of the pandemic for a long time.