U.S. ramps up restrictions to contain the coronavirus outbreak 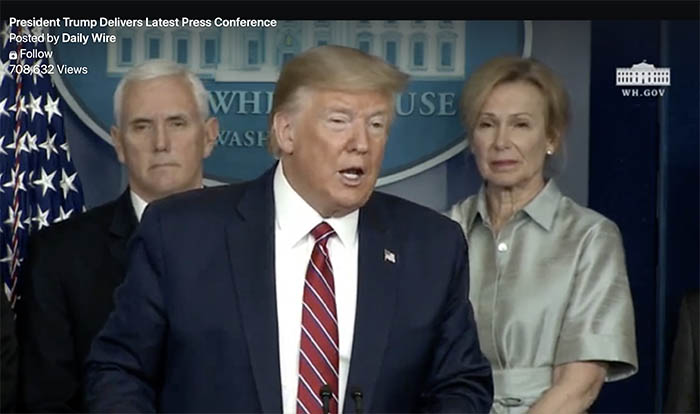 President Donald Trump updates the nation on his administration’s efforts to slow down the spread of the coronavirus, and support the millions of Americans impacted.

The United States has tightened restrictions to slow the spread of the coronavirus with the Trump administration partially closing the border with Mexico and New York ordering non-essential workers to stay home.

Secretary of State Mike Pompeo on Friday announced that the U.S. and Mexico agreed to close the border at midnight tomorrow to restrict non-essential travel.

“The United States and Mexico have agreed to restrict non-essential travels across our shared border,” Pompeo said during a White House briefing. “Both our countries know the importance of working together to limit the spread of the virus.”

On Wednesday, President Donald Trump tweeted that the U.S. will restrict non-essential travel to Canada by temporarily closing the border, and said trade will not be affected. The Canadian-U.S. border closure will also go into effect on Saturday.

In the U.S., cases of Covid-19, the disease caused by the novel virus, topped 15,000  with 201 deaths as of Friday afternoon, according to the Centers for Disease Control. Globally, more than 250,000 coronavirus cases have been reported with more than 10,000 deaths.

Secretary of Treasury Steve Mnuchin said via Twitter that the tax filing deadline has been moved from April 15 to July 15. “All taxpayers and businesses will have this additional time to file and make payments without interest or penalties,” Mnuchin said on Twitter. “I encourage all taxpayers who may have tax refunds to file now to get your money.”

During the White House briefing, Trump announced the suspension of federally held student loan payments for 60 days without penalty, and said interests will be temporarily waived.

Trump applauded measures taken by Governors Andrew Cuomo in New York and Gavin Newsom in California to contain the spread of the coronavirus.

Gov. Cuomo on Friday ordered all non-essential businesses to keep all their workers at home and told New Yorkers to stay home as much as possible by executive order, which takes effect on Sunday. The governor said the state does not plan to fine violators, and will not shut down public transportation or close roads.

Cuomo also mandated the closure of personal care businesses such as barber shops, hair and nail salons, and tattoo parlors starting on Saturday at 8 p.m. All nonprofit organizations and businesses must reduce their in-person workforce by 75 percent by the same time.

Cuomo said the number of reported coronavirus cases in New York reached 7,102 on Friday, 4,408 of them in New York City.

New York City Mayor Bill de Blasio pleaded on Thursday for military aid in the face of the spike of cases as the city becomes the epicenter of the outbreak in the U.S. De Blasio said medical supplies in the city are running low and hospitals could run out of supplies in two to three weeks.

Meanwhile, Gov. Newsom on Thursday ordered California’s 40 million residents to stay home except for trips for essential services like grocery stores, pharmacies and gas stations. Nonessential businesses such as movie theaters, gyms and bars had been ordered to close.

California has confirmed  more than 1,000 cases of the virus with 19 deaths.

In Puerto Rico, the number of cases of Covid-19 rose to 14 on Friday after the Veteran Affairs Caribbean Healthcare System confirmed six new cases under its jurisdiction. On Wednesday, Gov. Wanda Vázquez Garced asked the Federal Aviation Administration to cancel all domestic and international flights to the island for 14 days. Vázquez Garced on Sunday imposed an overnight curfew until March 30 and ordered a two-week closure of non-essential businesses to contain the spread of the coronavirus.