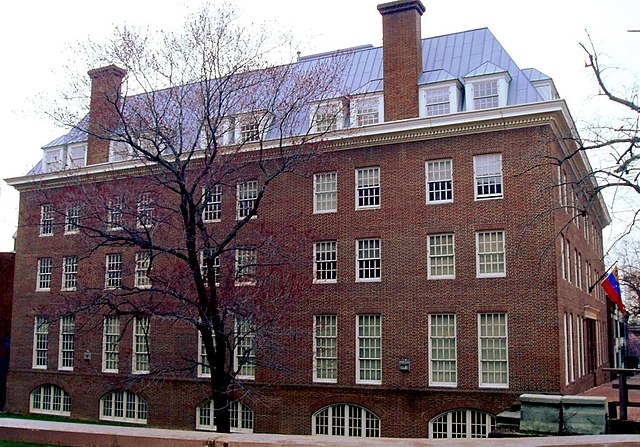 The Venezuelan Embassy in Washington, D.C. is unable to help stranded residents. Photo courtesy of Wikipedia.

Mariangel Asuaje arrived in Miami from Venezuela on March 12  with her parents, husband and children for what was supposed to be a family vacation. But they found out during their layover in Panama that the U.S. was about to implement a nationwide quarantine. Their two-week trip turned into a three-month odyssey during which they have had to count on the hospitality of family, friends and acquaintances in different cities to avoid sleeping on the street.

“We were on our way and we thought, ‘Let’s calm down, this probably won’t last long and we will probably be able to return in two weeks.’ That was our hope, but we’ve been here almost three months without being able to return to Venezuela,” she said.

Asuaje and her family are part of approximately 1,000 Venezuelans in the U.S. waiting for a charter or humanitarian flight to return them home. Most left behind family, businesses and jobs thinking they would only be gone for a couple of weeks. None of them expected that their trip would not have a return date. On March 17, the National Institute of Civil Aeronautics announced on its website and on social media that Venezuela’s airspace will be closed to foreign and domestic flights, following direct orders from Maduro’s administration. Since then, they have sent monthly announcements extending the restriction. 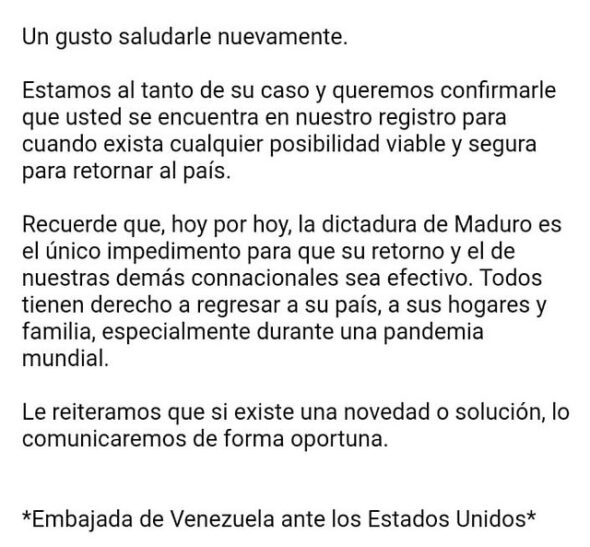 Screenshot of the email many have received from the Embassy of Venezuela to the U.S. “We remind you that currently, Maduro’s dictatorship is the only impediment to your return…if there is any update or solution, we will communicate with you promptly.”

In some cases, their tourist visas will expire soon and they cannot cover the cost of renewal, which would leave them in an illegal status. Others can no longer afford lodging, food or medical expenses, forcing them to seek help from churches for shelter and humanitarian aid.

“We need to work immediately. We need an income because we no longer have money,” said Azuaje, who has two children, ages three and four.

They hoped to get a job through friends in Massachusetts, but they contracted the virus and were unable to offer them help. A Methodist church in Georgia has been covering some lodging costs and helping them find solutions while they wait for a return date.

Desperate, this group of Venezuelans has contacted ambassadors and diplomats of both Maduro’s administration and Guaidó’s interim administration. Since Guaidó, the former leader of the National Assembly, claimed the presidency in January of last year Venezuela has had two presidents, complicating the already trembling relations with the U.S. Although the U.S. backed his claim to the presidency, the embassy of the Guaidó administration cannot perform many of the regular consular services due to the continuing power struggle with Maduro in Venezuela.

Not receiving any responses from either has led them to create Instagram accounts such as @venezolanosvaradosenusa2020, where they have organized lists to register those who are waiting for a repatriation flight. The list was sent to the Venezuelan embassy in Mexico and the United States with passport data, but they have not offered any solutions to date. The organizers of the Instagram account also created WhatsApp groups to keep everyone updated and help each other. 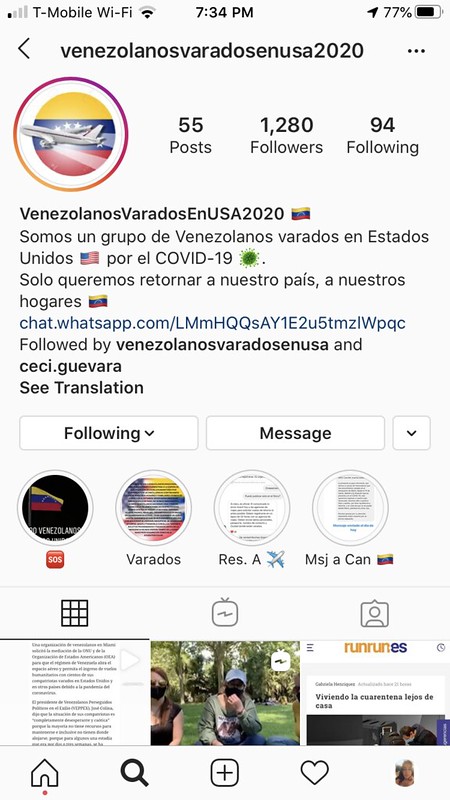 The lack of consular services, the breakdown of diplomatic relations between the two nations and the existence of two governments in the same country leave this group of Venezuelans totally helpless.

For Carlos Bouzada, it was frustrating to see how his friends from Peru and Colombia were able to return home on a humanitarian flight sent by their respective governments. Bouzada arrived in Tarrytown, New York, on January 6 to study English until March 14 at the EF institute. It was a trip to help him define his career and improve his language skills. However, it became the worst experience he has ever had.

He was on his way to the airport when he received an email from Avior airline notifying him that his flight was cancelled due to the virus. That same week, Bouzada was forced to lock himself in his dorm in EF since other students tested positive for COVID-19.

“It is hypocritical that people are allowed to cross (Brazil and Colombia’s) borders by foot where it is more difficult to control people than at the airport,” he said. “We are all Venezuelans, we have the right to enter Venezuela. They cannot take away from us the right to enter, even if there is a virus. Obviously, the measures that have to be taken must be complied with, but they cannot prohibit people living in Venezuela from entering their country.”

Despite the political polarization in the country, these Venezuelans do not care if it is Maduro or Guaidó’s government that returns them home.

“Both Maduro and Guaidó are playing with us because they want to politicize our situation,” said  Nayroby D’ Onofrio, who had come to Florida for a short business trip and left an 8 -year-old son in Venezuela. “So we are left in the middle with our difficulties. No one is thinking of us, they’re only thinking of fulfilling their political agendas.” D’Onofrio has not seen her son since March.

“We are all willing to pay for our flight and quarantine in Venezuela, because all of us who are stranded have our return ticket, we are not immigrants,” she said.

For Luis Valles, who came to the U.S. to visit relatives in Miami and Baltimore, the most difficult thing is the uncertainty of not knowing when he will be able to return to meet his wife and son, who is just three months old.

In addition to not knowing when they will go back home, they do not know what the quarantine conditions will be like when they arrive in Venezuela.

“They put people who arrived from the Dominican Republic in abandoned houses and took away passports and telephones, but I am willing to take that risk as long as I can set foot on (Venezuelan) soil,” Valles said.