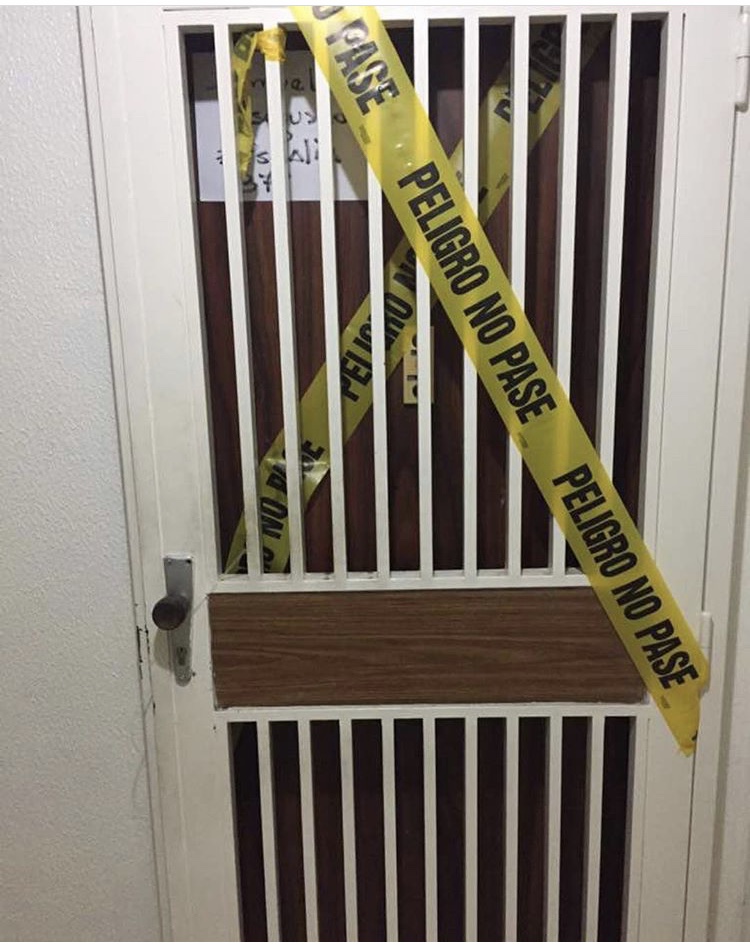 Valeria Sosa’s apartment door in Caracas, Venezuela, after it was ransacked by police on August 7, 2018. Photo courtesy of Valeria Sosa

In 2018 Valeria Sosa, 24, and her family had to leave Venezuela in haste after receiving a phone call from a neighbor. “The SEBIN broke into your apartment,” the neighbor told them, referring to the Bolivarian National Intelligence Service.

While the SEBIN officers were waiting for the family to arrive, they ravaged their apartment in Caracas, going through all their belongings. After that call, the Sosa family had to leave everything behind and plan their escape. They were able to cross the border to Colombia by car, and from there they flew to Florida to apply for political asylum. After a series of odd jobs, Sosa finally found a job related to her engineering degree in New York. Her first day at the job was Monday, March 9. On Friday, March 13, the office closed and the city went on lockdown.

“The first day in the job I cried because I couldn’t believe where I was,” Sosa said referring to the Major League Baseball office building at the Rockefeller center. “But I literally started on a Monday, and Friday of that same week the office closed because of the coronavirus. [In the office] it felt as if it had been 9/11, all the games were being cancelled, it was horrible.”

Venezuelans who have migrated to New York in the past two or three years have had to confront two crises in a short time frame. They left their country to flee rampant crime, hyperinflation, food scarcity, and social and political instability only to find the U.S. is plagued by its own set of issues, such as social inequality, racial disparity and police brutality, all of which are more evident in New York and the COVID-19 outbreak has exacerbated.

Niurka Melendez, founder of Venezuelans and Immigrants Aid (VIA), a non-profit organization for Venezuelans in New York, did not receive the $1,200 stimulus check as a Venezuelan asylum seeker.

“Venezuelans are seeing themselves left without nothing again, and I say again because starting from ground zero is not something new for them,” Melendez said. “After achieving some degree of financial stability they are stripped from it once more.”

Sosa and her family applied for political asylum because her mom was accused of participating in a drone attack against President Nicolas Maduro during a 2018 military ceremony in Caracas. Sosa said her mom had been helping student protesters who were struggling because of the country’s political turmoil. She collected food and clothing for them, and helped them find shelter. When the drone attack took place, Maduro’s government conducted arbitrary arrests, which included some of the students Sosa’s mother had been helping.

The SEBIN took their cellphones and saw WhatsApp messages from Sosa’s mother offering the students assistance. She was immediately implicated in the drone attacks, and currently there is an extradition request from Venezuela’s Supreme Court of Sosa’s mother.

“The neighbor told us the SEBIN was at our apartment and there was no way we could go back,” Sosa said. “We never returned, all we know from our neighbor is that they waited for us for hours while drinking our whiskey, wine and all the food in our fridge. They stole our TVs, our clothing, jewelry, our legal documents and left the apartment completely empty.”

Despite direct prosecution of the Sosa family from the Maduro government, Sosa is currently waiting for her political asylum application to be approved by the U.S. Citizen and Immigration Services, (USCIS) a process that usually takes years and could be further delayed due to COVID-19. According to the USCIS website, the New York asylum office will be closed indefinitely.

Ana Garcia, 19, arrived in New York in September of last year because she was awarded a scholarship to study performing arts in the New York Film Academy. Typically, international students arrive in the U.S. with a student visa already approved in their home countries. But since the U.S. embassy in Caracas is closed, Garcia had to enter the U.S. with a tourist visa and had to apply for a student visa once she was in New York.

While she awaited a response from USCIS, she did a Google search for “Venezuelan restaurants near me,” and walked into several of them to ask if they were hiring. One of them was, and she worked as a server there until the restaurant closed due to the city-wide lockdown. After the outbreak started, USCIS canceled the interview they had scheduled with her to approve her student visa without a new date. She requested her name to be changed as she fears this information could affect her student visa approval.

Garcia had to move out of New York to stay with a friend in North Carolina to cut costs. Without a job and without being eligible for economic assistance from the U.S. government, a New York rent was impossible to pay.

“It’s like going from one hell to another,” she said. “Just when I feel like I have achieved a better life, the [pandemic] happens. It hit New York so hard and it was really difficult for me, especially as an immigrant. I don’t have the same rights an American has. I’ve had to figure out everything on my own. I’m only 19, I’m not a grown woman with her life figured out, so it’s really hard.”

Melendez said there are still many paradigms with the Venezuelan migration.

“Countries still haven’t recognized Venezuelans as refugees. When Cubans arrive in Miami they obtain legal status, but not Venezuelans,” she said.  “Even though it is a forced migration due to the humanitarian crisis, the U.S. doesn’t recognize it as such. What [VIA] has seen during these 12 weeks of quarantine in New York is that, due to their irregular legal status, Venezuelans can only count on the support from churches, or an organization like [ours], or the International Rescue Committee.”

She added that she does not expect any support from the Venezuelan government for COVID-19 because of the longstanding lack of consular services.

Garcia has to return to New York eventually because she started all her migration paperwork in the USCIS office there. She is deciding whether to delay her start at the New York Film Academy a year, or until she knows for certain she will be able to attend classes in person. She cannot return to her home in Caracas because of her pending visa appointment. Garcia is counting only on the support of Venezuelan friends she has made since her arrival in the city. One of the most difficult things for her is not being able to be with her family.

Since Sosa’s arrival in the U.S., all the jobs she has landed have been through her own search or through word of mouth, and she does not know of any organizations that help Venezuelans integrate to their new communities. She was able to maintain her engineering position and is currently working remotely from New York, but her weekly hours were reduced. For her, the social and political unrest brought by COVID-19 and the police murder of George Floyd are reminiscent of the ongoing protests in Caracas demanding reform and justice from the government. She is used to the social and political unrest that has followed her all the way to the U.S., but she is not used to being far away from her family, who is currently in Miami.

“Even though sometimes we wouldn’t have electricity or running water, I had a stable life [in Caracas] so I feel like I’ve been ripped from my nucleus,” she said. “This pandemic is killing me because of the anxiety of being alone.”

If Maduro were to rescind, the Sosa family would return to Venezuela in a heartbeat. But as long as his administration is in power, they do not have that option.

“We couldn’t even leave the country by plane,” Sosa said. “We are literally exiled, we can’t return to Venezuela. If that wasn’t the case, I would be there.”