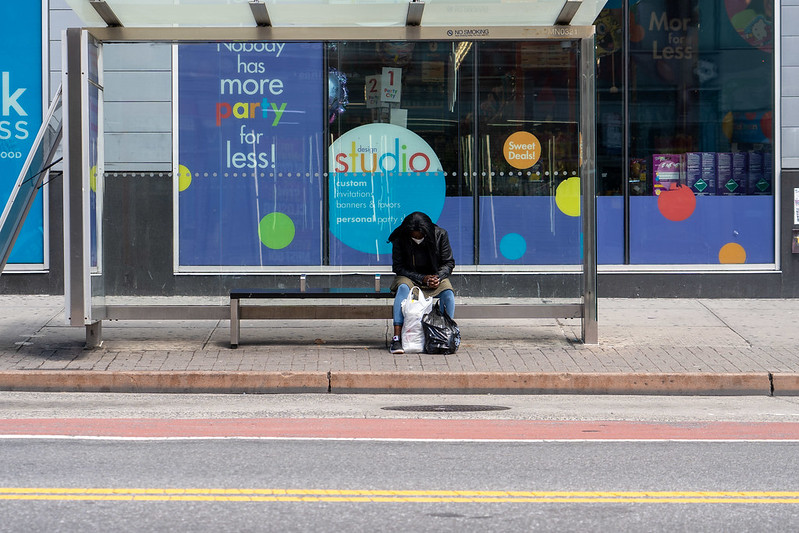 All across the country – in the dense urban areas of Chicago, Detroit, New Orleans, New York – emerging data show an alarming trend: Blacks are dying at rates of up to 3,4, 5 or 6 times that of other races.

Black people are not inherently susceptible to the Covid-19 disease itself.  Systemic inequalities resulting from ongoing racism are the true culprits here. Living in a society where the status quo has relegated generations of blacks to substandard housing, especially in large metro areas – cramped, poorly maintained, children growing up with asthma – and neighborhoods devoid of healthy choices in food and education, create the perfect storm of vulnerable: unhealthy, underemployed and disconnected from mainstream advantages. This is where the coronavirus has landed.

“Why is it three or four times more so for the black community as opposed to other people?” Trump asked at a recent White House briefing.

The incoming data showing the virus’ especially devastating impact on black communities was “troublesome”, President Trump said, and “doesn’t make sense”. He said the task force is studying the data further to come up with appropriate recommendations. 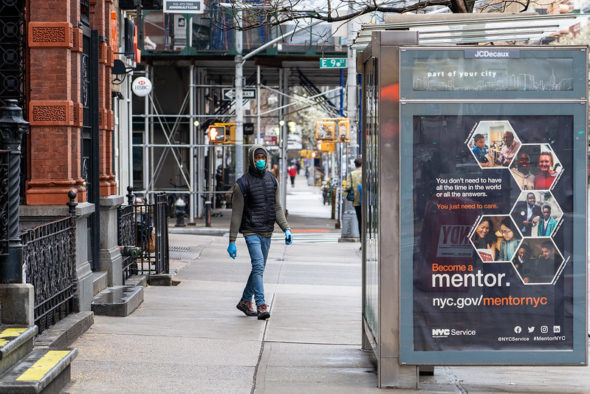 A person walks along a virtually empty 2nd ave in the East Village. Photo by Thomas Hengge

“Health disparities have always existed for the African American community,” Fauci said, speaking at a White House press briefing. “With the crisis, it’s shining a bright light on how unacceptable that is. They are suffering disproportionately.”

The coronavirus disease, Covid-19, attacks the upper respiratory tract of potential hosts, causing only mild flu-like symptoms in most individuals, but often proving deadly to the elderly and those with underlying, chronic health conditions such as diabetes, hypertension or cardiovascular disease.

A large number of African Americans fall into the latter group. The death rates keep outpacing the rest of the population.

“It’s not that [blacks] are getting infected more often,” Dr. Fauci said. “It’s that when they do get infected, their underlying medical conditions – the diabetes, the hypertension, the obesity, the asthma – those are the kind of things that wind them up in the ICU and ultimately give them a higher death rate.”

As of  today, the world-wide pandemic has infected over 1.9 million people, with close to 120,000 lives lost. Within the US, the number of positive cases was at 587,357, with the virus  snatching over 23,649 lives on its relentless, destructive path.

In New York, the state currently with the highest number of confirmed infections of 195,031, the death toll stands at 10,056 victims.

The New York Department of Health on Wednesday released its first breakdown of fatalities of the disease based on race and ethnicity. The data shows blacks and Hispanics dying at the highest rates. 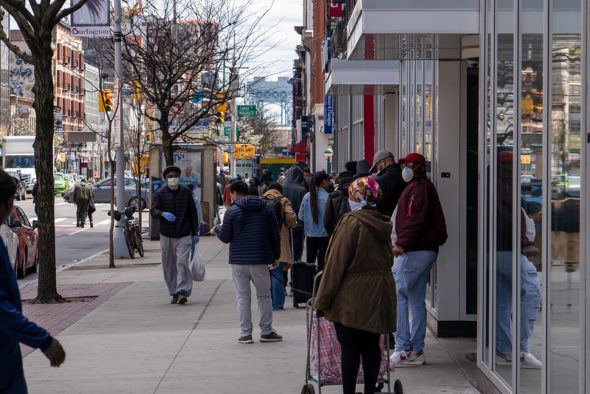 Governor Andrew Cuomo and Mayor Bill de Blasio of New York, along with Brooklyn’s Borough President Eric Adams, have joined the chorus of voices demanding more stringent study of the virus’ impact on communities of color and immediate remedies to mitigate the disproportionate trajectory.

Echoing the observation that untreated chronic health problems predisposes communities of color to suffer more fatalities from the virus than other ethnicities, governor Cuomo added that this population was also dominated by people who work on the front lines who are unable to work from home.

They don’t have a choice but “to go out there everyday and drive the bus and drive the train and show up for work and wind up subjecting themselves to, in this case, the virus,” Cuomo said.

While the governor has ordered more testing to immediately take place in black and Hispanic communities to identify, and attempt to slow the spread of the virus, transit workers in New York are dying and being sickened at escalating rates. 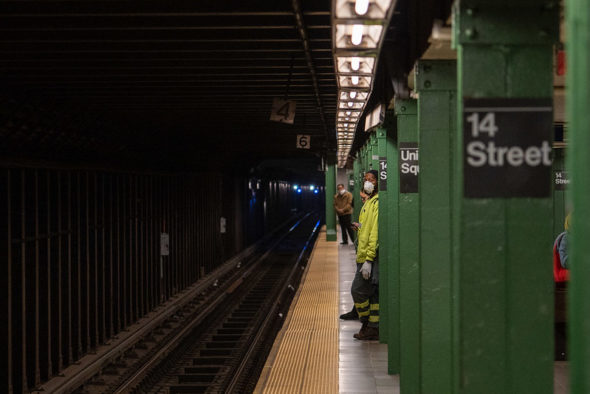 A worker waits for the downtown 6 train at 14th Street Union Square. Photo by Thomas Hengge

To date, 50 Metropolitan Transportation Authority (MTA) workers – mostly subway workers – have died from coronavirus. Throughout the MTA system – NYC subway and bus transit system with its large minority workforce, Metro North and the Long Island Railroad – about 1900 more workers have tested positive with 5,200 in quarantine.

“Racial disparity has never been more evident,” says Eric Adams. “The subways are filled with black and brown people” going to “essential jobs” in transportation, food service, hospitality and retail. Many without the necessary protective equipment to work safely or financial means to stop working and shelter-at-home.

Speaking at a recent press conference, Mayor de Blasio said the economic and health disparity in poorer communities of color was nothing new.

“The disparities that have plagued this city, this nation, that are all about fundamental inequality, are once again causing such pain, and causing innocent people to lose their lives,” he said. “It’s sick. It’s troubling. It’s wrong. And we’re going to fight back with everything we got [to right the inequities].”

In Louisiana, governor John Bel Edwards, said the data coming in shows that 70 percent of the deaths statewide were of African Americans who were only 32 percent of the population.

“We got off on the wrong foot here,” Jones said. “From a media point of view, and from a community point of view. Everybody started saying, in the black community, ‘this is a white folks’ thing. In fact, a rumor got started that black people were literally immune to this disease. That was all over the Internet – started off as a joke – people took it seriously.”

Jones appealed to the black community and anyone who had friends and family who were not properly informed, to recognize the seriousness of the crisis and to follow the social-distancing guidelines and other mandates from local and federal governments. 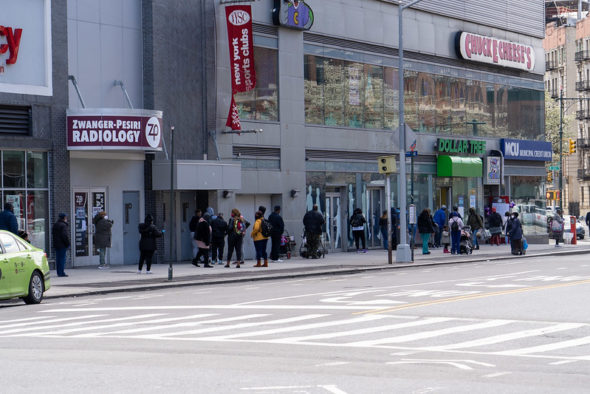 People wait on line to enter the Dollar Tree in Harlem, April 4, 2020. Photo by Thomas Hengge

Producer, writer and actor, Tyler Perry, speaking at a recent CBS interview, also spoke of early disinformation circulating online that the disease was not an issue black people should be concerned about.

Perry said he saw “too many things online saying, ‘oh, we don’t get this,’ or ‘Black people don’t travel abroad, so it’s not going to come to our community’.” But “that is a ridiculous thought,” he said. “It is coming to-it has come to our community, and it’s devastating us in disproportionate numbers.”

In Chicago and Detroit, now seeing rapid spikes  in coronavirus infections, the trend continues: blacks being the minority in the state, but the cities grappling with their skyrocketing, death tolls that could rise as high as 8 times that of the other residents.

African Americans make up about 14 percent of Michigan’s population, one third of its confirmed cases and 40 percent of its deaths. The city of Detroit makes up 75 percent of coronavirus deaths.

Lightfoot said the numbers were the most “shocking things” she has seen as a mayor.

Dr. Fauci said “when this is over, there will still be health disparities” that “really need to be addressed in the African American community.”