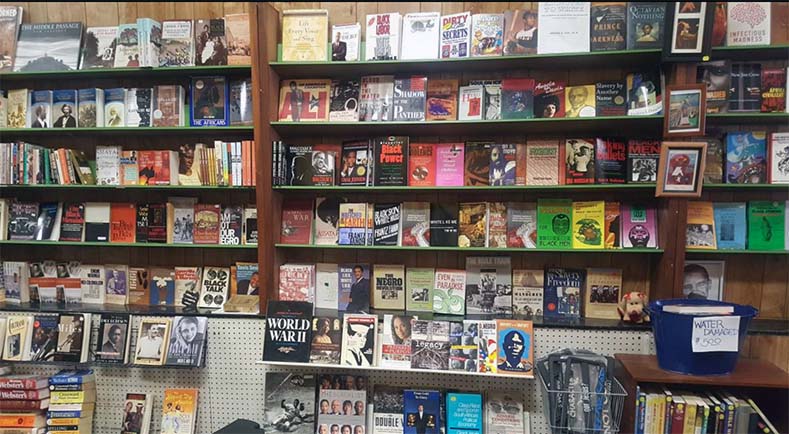 A bookshelf in Hakim’s Bookstore in Philadelphia, Pennsylvania

During last summer’s ‘Black Lives Matter’ protests, throngs of people weren’t just filling the streets, they were also filling the bookstores. Everywhere, sales in books about white privilege and anti-racism skyrocketed so high so fast that some were on backorder for months. Black-owned bookstores, in particular, benefitted from this sudden surge. Now, over a year later, some of these Black-owned bookstores talk about whether people have stayed engaged.

“When the pandemic hit, we were closed for a little over three months, but after George Floyd got murdered, people were so alarmed and horrified that they decided to start reading,” Blake said. “Therefore, we noticed that uptick in our online sales, especially race-conscious books.”

On the day George Floyd was murdered—May 25, 2020—there weren’t any books exclusively tackling white privilege or anti-Blackness on the New York Times’ Best Sellers list. “White Fragility” by Robin DiAngelo was the only book to break through the week of May 31, but by June 21, almost 70% of the Times’ Best Seller list confronted race.

“I had the books shipped to my home then I was shipping books out of my dining room and going to the post office and standing in a very, very long line,” she said. “Because we were hit all of a sudden, initially, we didn’t even have a website until we got one developed. The volume increased so much: almost like day one after he was murdered, that we had to put some operations in place.”

When sales became overwhelming, Blake had her family members help out including her daughter, granddaughter, and sister. Family collaboration is nothing new for the bookstore, which has been family-owned and operated since Blake’s father founded it in 1969 making it the first and oldest African American bookstore in Philadelphia. This historical significance played a significant role in increasing the bookstore’s exposure.

“We started making friends and acquaintances around the United States and I was even shipping books over to Europe,” Blake said.

“We saw that initially, the surge was for antiracist literature and specific titles and authors. However, customers were also attending online events and signing up for our newsletters,” Robinson said. “The exposure even landed us a feature in an article about Black-owned bookstores across the United States in The Oprah Magazine.”

Since then, a lot of things have changed.

“As things stand now, the surge of orders has drastically died down,” Robinson said. “We still have a steady stream of orders, but they are not nearly as overwhelming as they were during the summer of 2020 so they have plateaued to what is probably the normal rate for an independent bookstore.”

Blake also said that online sales of Hakim’s Bookstore have gone back to what they were before 2020. However, as a result of the exposure, the foot traffic has increased as well as their relationships with educational institutions.

“It was just kind of amazing to me that, you know, we’ve been trying to teach this history. And now there’s more of a push to get all children educated in critical race theory,” she said.

VaLinda Miller, the owner of Turning Pages, a Black-owned bookstore in Goose Creek, South Carolina,  said many customers were trying to educate themselves.

“These books opened many people’s eyes on the history and it helped to bring back Black authors from the 1940s to now,” she said.

Robinson said she is not surprised at the drastic decrease in orders after the protests died down.

“I did think the excitement over Black-owned establishments and antiracist literature would be short-lived,” she said. “In fact, I am honestly surprised when I see those popular titles from that time still show up in orders.”

Seeing this, Robinson encourages people who have stopped buying from Black-owned bookstores and reading antiracist literature to continue.

“This is a movement, not a moment,” said Robinson. “Continue the dialogue and continue the journey. We have not solved the issues addressed in those readings and there is still work to be done.”

When asked if this short-lived surge made her consider the possibility that people were just being performative in their purchases, Blake said she can tell who is being performative and those who truly want to be educated by the types of books they want to read.

“They might want to read a ton of Ta-Nehisi Coates books but if I try to introduce them to a book that actually deals with true African American history, like a John Henrik Clark book, they’re not so much interested in that,” she said.

Many who got caught up in the Black Lives Movement during summer 2020, bought one or two books from Black-owned bookstores, and then never went back.

To these people, Blake wants them to ask themselves some tough questions.

“Do some soul searching and ask yourselves, ‘did I just do this because it was the thing to do at the moment to make myself feel better and to feel that I was part of the movement?’ or ‘do I really have an honest interest in trying to establish racial equality and respect among the races,’”  she said.