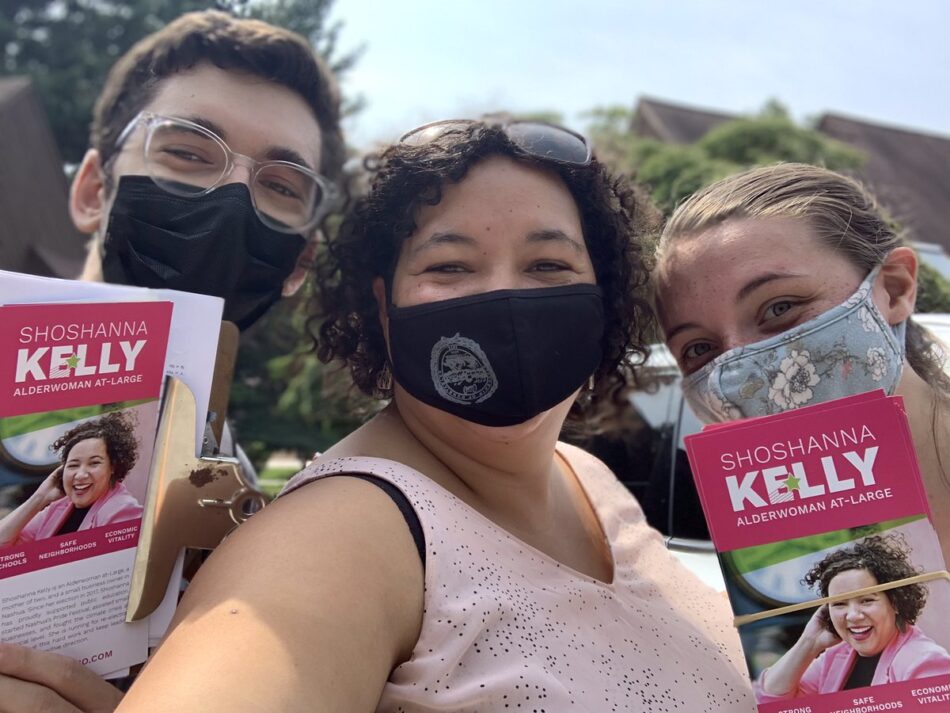 Whether it’s behind the curtains of a major political parties’ campaign base, or the private office of local election officials, the boiler room is always a mixture of agony, ecstasy, and a lot of waiting. On November 2 the same was true for Shoshanna Kelly’s team as they closely monitored the polls, local news, and Twitter, eagerly awaiting to see if their candidate will be re-elected for a second term as Nashua’s Alderwoman at-large. In the late Tuesday hours Kelly rejoined the city councils’ board for another four years, effectively becoming the first woman of color to be elected and re-elected.

Born and raised in New Hampshire, Shoshanna Kelly always had a calling for politics, but only set foot on that path after her college years. In her first term she fought for a better and more inclusive life in her city, is a climate change activist, and continues to wrestle the  pushback she faces on a daily basis.

“You know, there were several people in the race last night who were racially targeted and lost,” Kelly said. “And we had proud boys and Neo Nazis showing up and, you know, doing things at the polls yesterday that were just appalling.”

Being an elected official of color in a state where the black or African American demographic makes up a mere 1.6 percent, an advantage Kelly seizes is to be able to bring a fresh perspective to the table. Throughout her time on the Board of Aldermen, she has pushed for more progressive policies and disrupted the traditional notions of local politics stirring controversy amongst sitting board members.

“Regardless, I believe that the fact that she received the most votes on Election Day demonstrates that the citizens of Nashua want diverse leadership and trust Shoshanna to be their voice in city government,” said Ben Telerski, Kelly’s long time friend and campaign manager.

While technically being a nonpartisan election, the Nashua Democratic and Republican Parties were very involved in campaigning this year. Kellys’ team has found it to be a helpful and agenda-clarifying boost to be openly supported by the party. Now Kelly seeks to empower more young leaders of color throughout the state to use their voice to affect change.

“I hear a lot, ‘Well, I don’t want to be the first black woman, I don’t need that as part of my title.’ And while I understand that, there are a lot of little black girls out there looking and seeing that you’re there, or that you’re wanting to be there, and that you’re willing to lift your voice up,” she said.

Kelly had an interest in being involved in politics from an early age, maybe since being the only black girl in her middle school even, but only after Donald Trump’s election win, and attending the Women’s March in Washington DC in 2017 did it dawn on her that if she didn’t like the leaders being elected, Kelly herself could be the leader her community chooses. After serving Nashuas public for four years, she  has woven a dedicated network of constituent supporters and built a goal-oriented team of local talent and activists supporting her second term.

“I think Shoshana is one of the leading faces of a whole new generation of young leaders in the state that actually really do reflect the future of New Hampshire, and also more accurately reflect where we’re at, and looking towards a future in our cities, towns, and a state that’s diverse,” said Theo Groh, director of digital marketing and outreach for the campaign.

Kelly states a clear message of wanting to give a voice to those not heard thus far in her hometown. In her first term she has  played a major role in creating the first pride parade in Nashua, offering teens a safe space to speak up about their sexuality, pushing for a performing arts center to be built in town, and with that making Nahusa no longer just a bedroom community to Boston.

“I think when you have a candidate like Shoshanna, it’s a real opportunity to engage in future oriented conversations about what do we want to look like? This next couple of budget cycles or election cycles, but what do we want, you know, nationally to look like 10 years from now?” said Groh.

When thinking about the future of the state and looking at potential leaders, Kelly thinks that oftentimes what keeps women and people of color out of the political arena is the idea of qualification. Media streamlines the necessity of degrees, an MBA, and other requirements to enter higher levels of politics, but Kelly disagrees.

“I think my advice would be that you are qualified if you live in the community, you have passion for that community, and you are ready to listen…,” she said. “So getting yourself out there is just as important as winning. It makes a difference to those kids who haven’t always had that type of leader.”