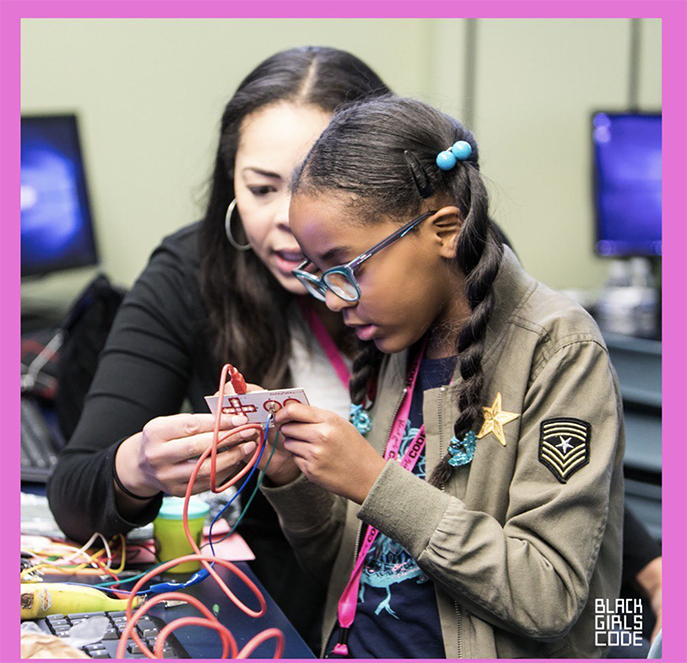 A girl explores tech with a mentor. Photo courtesy of Black Girl Code

Lauren Jones decided she wanted to be a scientist  by solving maze puzzles. She was doing it much quicker than her 7th-grade peers and one day her school librarian approached her.

“You are really good at this,” she said. “Have you ever considered engineering?”

Unfortunately for Jones, her school did not offer any classes to prepare her for an engineering or science career.

“In lower-income neighborhoods, there is almost a negative amount of STEM education,” said Jones, now 20, of Bridgeport, Connecticut. “It’s one of the hardest things to teach, so they just don’t. They usually don’t have the resources. When I was in middle school, we had a workbook, and that was it.”

To have the opportunity of getting into a college science program, Jones attended high school in an affluent White neighborhood 20 miles out of her city. She initially concentrated on chemistry, but was put off by her teacher, who seemed incapable of comprehending how someone can do well academically and be Black.

“At the time I was applying for colleges, I told him that my dream school was MIT,” said Jones, “After that, every time he passed me, he would turn to someone and be like, ‘Guess what, did you know she’s applying to MIT?”

Despite the obstacles, she succeeded and now Jones is one of only two Black female undergraduate students studying physics at New York University. The department doesn’t have a single Black woman as a faculty member and only 2 percent of practicing scientists and engineers in the U.S. are Black women.

“The route of Black women going into higher degrees in STEM is not traveled almost at all,” she said. “So, knowing that you gonna have to go through the trouble of paving your road is kind of daunting.”

Esther Bioh, 20, of the Bronx, New York, is the other Black woman in the NYU undergraduate physics program. She said she has had a similar experience.

“Feeling supported, feeling like there are people like you, who know what you’re going through, is very important,” said Bioh. “I have a friend who dropped out of the Binghamton University’s biomedical engineering program last year due to the lack of support.”

The need for mentorship persists in the higher levels of education. Barbara Akum, 50, of Bamenda, Cameroon, teaches biology at NYU.

Akum said there is a gap  between her students who come from a background that enabled them to develop the skills necessary for a scientific degree and those who did not.

“You have students who did not have biology in their high school,” she said. “So even if they want to study it, they’re at a much lower level than every other student. Which means they have to work hard just to catch up, and then work harder to understand the material that is being taught. As a result, many end up changing their majors.

Nia Asemota, 21, of Yonkers, New York, is a technical instructor at “Black Girls CODE,”  She said she sees her role as a living example that Black girls can grow up and work in STEM despite the obstacles.

“As a society, I sometimes think that we don’t often acknowledge the psychological strength and resiliency it takes for a woman of color to succeed in spaces that are predominantly filled with men,” said Asemota.