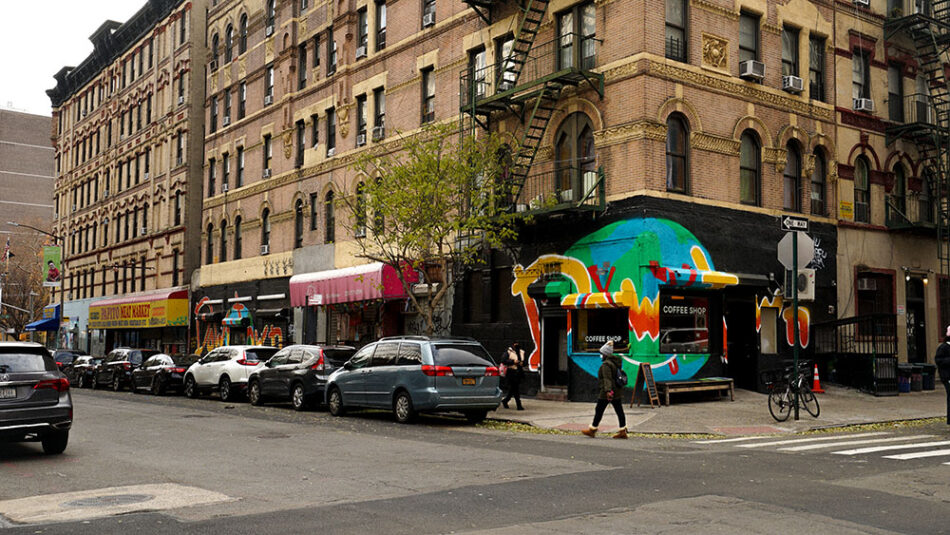 Aaron Lynch was with his boys, drinking, on the night that a familiar car pulled up and told him to get inside.

“‘Where the f–k are we going?’” Lynch asked the driver, before settling into the car. “‘You’ll see,’ they told me.”

A few minutes later, they arrived at what used to be his local Chinese restaurant, just up the block from where he grew up in the Lower East side, now permanently closed. At the gate, everything clicked for Lynch.

“No one in the neighborhood knew what was going on, but I knew,” said Lynch, who had grown up with the owners, and been queued in on what might be happening inside.

“So we get to the spot, right there, and they open the gate, “ said Lynch. “And it’s just tons and tons of coffee beans. Just a bunch of beans.”

The mound of beans that night had been imported by Lynch’s longtime neighbors, a Chinese-Guatemalan family that owns much of the block on which Lynch’s coffeeshop now stands. They had closed their old restaurant, invested in a turkish coffee roaster, imported the beans from their farm in Guatemala, and after witnessing Lynch’s previously successful entrepreneurial efforts, asked him to head the brand.

“I basically tripped and fell onto a coffeeshop,” said Lynch.

And so, after years of jobs including being a Rabbi’s personal driver, selling socks out of his car, and spending a decade as an artist manager, Lynch saw the makings of “DOWNTOWN,” a Black-owned brand that he originated in the Lower East Side, and which would become a major part of his identity. Like all business owners, he just had to build it first. 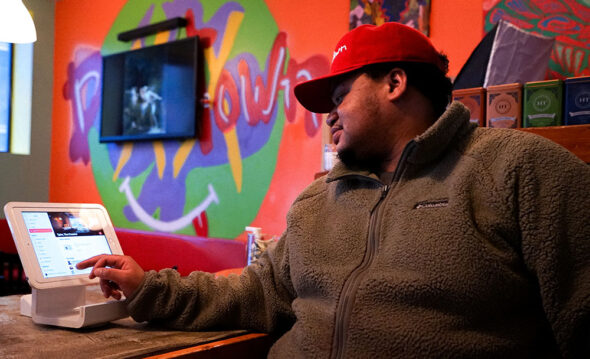 At the time, the music management industry, which Lynch had grown up in, was becoming too saturated for his taste, and he wanted out.

“What I did was I took all my connections from the music industry and I introduced them to coffee,” said Lynch. “I hit up my boy Juju one day, who was working at 300 Studios as a manager, and presented the idea of me doing a coffee tasting. Producers, label execs, it was the weirdest thing ever, we were all just in a music studio drinking coffee. It blew their minds.”

The tasting was a success, and now they had the investors they needed.

“I was supposed to handle the brand, and they were gonna handle all the coffee and management,” said Lynch, referring to the family who had presented him with the opportunity. “All the roasting, the blending, everything. I didn’t care about coffee.”

The team got to work. Lynch decided to design the store front to be a contrast to most coffeeshops: vibrant, almost-neon paint covers the walls, and music is always blasting.

“Every coffeeshop is just brown, and really quiet, and not fun at all,” said Lynch. “How the fuck do you get inspiration there? You go into a place to create….”

In February of 2020, after building the store front with his father, and only a few weeks before COVID, Lynch and the family finally opened Downtown Coffeehouse in the Lower East Side. Two weeks into being open, the people in charge of roasting the beans flew to Honduras to work a quick job, planning on returning promptly. What they didn’t foresee was the swift and devastating impact of the pandemic.

“Airlines shut down, no in or out,” said Lynch. “They were stuck in Honduras.”

The back of the store had blended and roasted enough beans to last at least a few weeks, more than enough for the duration of their intended absence, but not nearly enough to last until their  unforeseeable return.

“Month one, month two, and I’m running out of coffee,” said Lynch. “I’m asking my girl, Blue, ‘What the f–k are we gonna do?’ So, I called them, and learned how to roast over facetime.” 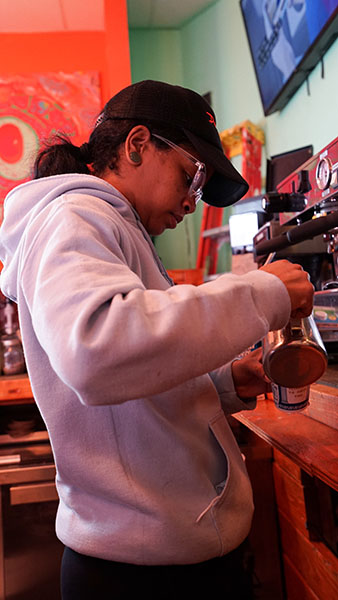 For Lynch and his business, the pandemic was a turning point to a more independent future. At that point, he had already brought his girlfriend, Nailah “Blue” Berkeley, onboard as a barista. Together, they were working around the clock to keep things running.

“I taught him how to make coffee,” said Berkeley, laughing. “And I had to learn how to build credit, and manage my money.”

With the team gone, Lynch and Berkeley were forced to gain business, management, and roaster experience, and as a result, Lynch finally fell in love with the coffee he was creating.

“With all the flavors you can get, it’s like a science and a culture,” said Lynch. “Remember in the early pandemic? No one knew how to act. They were opening doors with elbows, feet, and immediately sprayed things down when they arrived. ‘Did you see that guy cough!?’ But people always came in, because they needed their damn coffee.”

Eventually, Lynch and Berkeley were able to confidently run the entire business on their own, and after some brief tension with the employees upon their return from Honduras, that’s exactly what they did.

“They warned me,” said Lynch. “‘The overhead, the running a business all alone, it’s a lot. Are you sure you can do it on your own?’ And I’m so ‘Yep!’ that I’ll say yes regardless, even if I have no idea how I’m gonna figure it out. I’ll take on the bills, I’ll stand my ground, f–k it. Something happened, where I really started loving the coffee.”

So, Lynch and Berkeley inhereted the full weight and control of Downtown Coffeehouse, and it worked.

“So much has changed,” said Berkeley. “I had to go from doing a nine-to-five online sales job in SOHO, to being a partial independent business owner. I needed an out for so long, and it took a pandemic for it to happen.”

Berkeley and Lynch can’t say exactly when they met, but they know it was somewhere in New York’s underground party scene, many, many years ago.

“Yeah, hell no, we can’t do that anymore,” said Lynch. “Running a business, there’s no time for the party scene.”

Before they were co-owners, Berkeley and Lynch were good friends, and then romantic partners. Lynch, an early-riser, is usually the first to get to the coffeeshop, around five or six in the morning. And, after some extra hours of slumber, Berkeley will arrive around 10 to relieve Lynch of his shift. He knows her to be an attentive, logistical thinker: someone who loves to lay in bed. She knows him to be determined and creative, if not occasionally forgetful.

“All the art and design is his, but right now we’re about to run out of small cups,” said a smiling Berkeley. “We’re a tag team. We compliment each other.”

According to Lynch and Berkeley, their business is like their child: no matter what ends up happening between them, it will always come first.

“Trust each other, and just because things are not so good on one side of the equation doesn’t mean that it has to affect the other side,” said Berkeley. “It can be challenging, but if you keep that in mind, it can help.”

Lynch spent a large portion of his childhood on Cherry street, just a block down from the location of his coffeeshop. He says he’s seen businesses die and the neighborhood change. According to him, on one hand it has become more gentrified, and on the other, it has been populated with alcoholics, drug addicts, and homeless people. All of which he wants to feel welcome in his shop.

“Nate!” yelled Lynch, suddenly calling out for a man by the entrance. “Nate. I look out for you?”

To which Nate, who met Lynch on a construction job many years back, with a furrowed brow and nod of his head, quietly responded to a reporter, “Look. I’m a homeless guy. If I’m ever cold, or hungry, or I need a dollar or something, he’ll always be my help,” before pointing directly at the coffee shop owner.

Lynch’s own family has struggled with homelessness and drug addiction, and many of his friends in the music industry have histories of homelessness. In fact, much of the artwork that lines the walls of the coffeeshop was made by, and purchased from, the homeless people that Lynch knows on the street.

“A lot of times, we’re not raised to think about security, or having money to have just in case,” said Lynch. “I was not raised like that. Drug addicts, or family dies, and they have nowhere to go; for some people, it really is just their story. I’ve had to buy dollar slices plenty of times.”

If you walk up to Downtown Coffeehouse once the steady stream of customers has slowed down, you’re likely to see Lynch sitting on the wooden bench outside, talking, and probably smoking, with what looks to be a friend. This person could be one of his neighbors, who Lynch has caught in a friendly, conversational trap. Or, it could be Shon, his mother’s old friend who works as a bouncer on the weekends, and spends much of his time at the coffee shop.

“The first time I got his phone number, he got tight because I saved his number as ‘My Mother’s Friend,’” recounted Lynch. “He said ‘C’mon man! C’mon man! My name is Shon, man. Bet you don’t know how to spell it!’”

To which Shon, wearing a Canada Goose beanie and a necklace with a large, gold medallion on it, continued, “His mother used to hang out with my sister in junior high. So you’re talking about 40 years there. Now, I work in a hospital’s billing department.”

“Speaking of which, you didn’t pay for those coffees this morning,” said Lynch, an allegation that Shon promptly denied.

More than a year and a half after they first opened, Lynch and Berkeley decided to move the coffeeshop from it’s original location, two doors down, to its current location on the corner of Henry and Jefferson. Outside, spray painted on the pitch black exterior walls, is a fresh, giant, colorful globe, covered in bright orange letters spelling “DOWNTOWN.”

“This place is a blessing,” said Lynch. “And I’m happy now, I’ll tell you that. This is me now: me on a wall. But this is just step one, and there’s way more to go.”