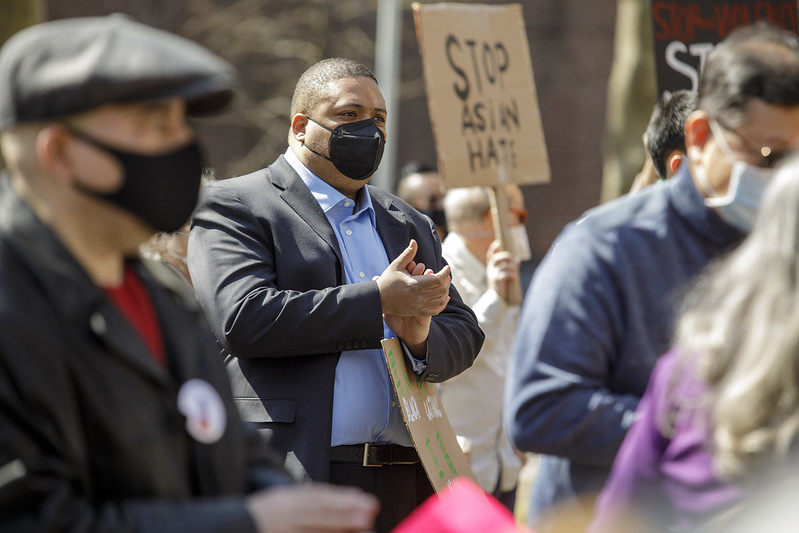 Before Alvin Bragg attended Harvard, and before he became a New York State, and Federal, prosecutor, he was a New Yorker, growing up in 1980’s Harlem.

Bragg, Manhattan’s first Black DA, is welcomed by many New Yorkers as being home-grown, and for confronting issues important to the community. In fact, he spent the week leading up to the election questioning members of the NYPD for their handling of Eric Garner’s death at the hands of a former officer.

But while Thomas expressed hope that Bragg would bring more racial justice to Manhattan, he also wanted him to maintain a certain level of rigidity to the city.

Thomas isn’t the only resident who shares this sentiment for wanting to maintain the strength of the justice department.

“New York is a tough city, and needs someone who’s tough, and the democrats are kind of lax,” said Midtown resident Charles Amos. “I do like that when it’s a democratic state that we have more of a hippy state, so it’s nice to know that we have another four years of that feeling. But I’m gonna be looking at him hard.”

Bragg, a progressive democrat, has previously stated that he wants to “shrink the system,” by showing leniency to low-level offences, and not prosecuting people suffering from mental health issues. On top of that, following a steep rise in fatal shootings last year, Bragg said that his day one priority is to get guns off the streets. Though solid details on how he plans to do so remain up in the air, that initiative seems to be important to the community.

“People get shot on this corner of the park,” said 25-year-old Chad, who lives in the East Village and didn’t feel comfortable giving his last name. “I’ve been to NYU for seven years. I don’t want to be out at night, coming out from studying, coming back from hanging out, and be scared of gunshots. You know? It’s creeping closer. “

White collar crimes also stand on the forefront, as Bragg inherits the power to prosecute Donald Trump, taking over the reins from district attorney Cyrus Vance Jr., who got Harvey Weinstein convicted, and who recently charged the Trump organization with tax evasion.

“Maybe they tax him, maybe they send him to jail, though I doubt that happens,” he said. “But it’s not really what affects my day to day goings on.”

For some, the opposing view is equally strong.

“Prosecute him,” said Thomas. “My personal opinion of Donald Trump? They should build a quadruple, super maximum security prison just for him, put him in it, and lose the key. And if they can’t lose the key, melt it.”

Bragg will take over from district attorney Vance starting January of next year.