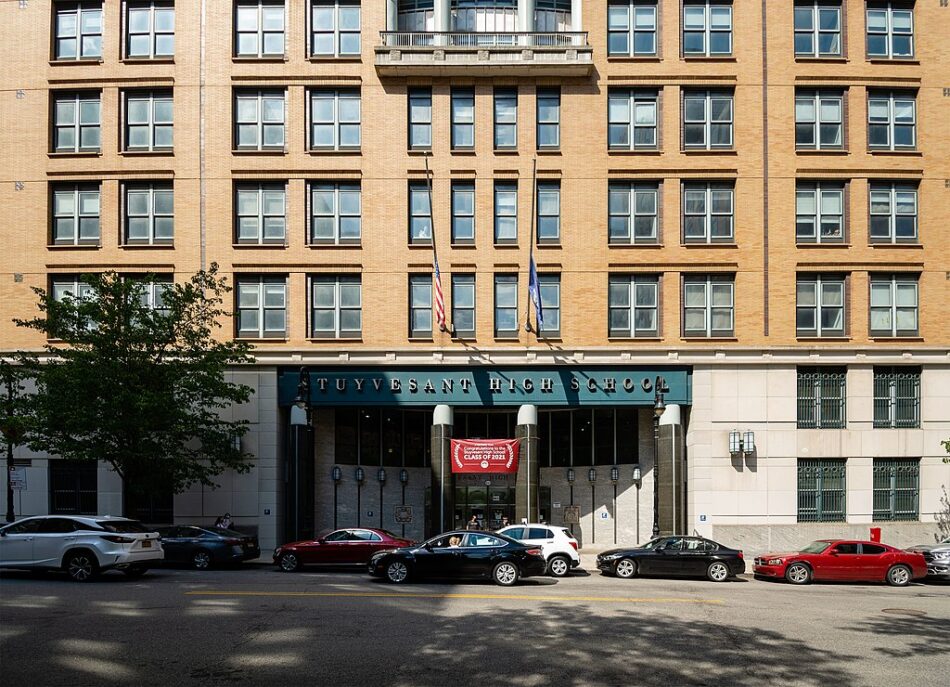 In pop culture, the American high school experience is romanticized. High school is oft-depicted through scenes of teenage escapades: shenanigans with your best friends; an insolence evidenced by the exploration of personal identity. This is all before higher education supposedly thrusts you into the “real world.” For 16-year-old Arlette Duran, high school is as real as it gets.

“It’s nothing like the movies,” lamented Duran, a junior at New York City’s Stuyvesant High School.

Ranked 44th among high schools in the nation this year by U.S. News, Stuyvesant High School is one of the city’s eight specialized high schools. Inundated with test prep and pressure to bolster their resumés before they even begin college, students like Duran are wistful for a “normal” high school experience.

“In New York, specialized high schools have a different environment than other schools,” Duran said. “When I see people’s Instagrams or hear their stories about their schools I feel so jealous. They get less work and get to have much more fun and have a better social life.”

The stress associated with the city’s specialized high schools begins far before students enter the doors. While these prestigious, highly competitive schools are public, admission is only granted to those who achieve top scores on the high-stakes Specialized High Schools Admissions Test (SHSAT). Along with the test, students rank these schools by preference. Depending on their test score, school preferences and seats available at each school, they are offered admission. Some students spend full summers at pricy test prep centers ahead of taking the SHSAT, while others know little info about the test or these coveted schools.

“I spent less than two months in total preparing for the SHSAT,” Duran said. “My math teacher during the seventh grade offered tutoring to my class twice a week after school starting in late May. After school ended I just spent around a week doing practice because I didn’t have much resources.”

Academic pressure is just one stressor impacting some students at these sought-after high schools. For Duran, who is Afro-Latina, her experiences look different from that of most of their peers. She says it’s because she looks different.

“As a non-Asian student of color I feel very underrepresented because there aren’t that many of us who can connect and become a family,” said Duran, who is Vice President of ASPIRA, the school’s Hispanic Students Association.

In their policy brief they stated, “the sobering reality is that disparities in the specialized schools mirror larger, system-wide achievement gaps that exist prior to middle school.” Researchers found that a long legacy of sorting students as high or low-achieving—testing and then segregating children from an early age—exacerbates the achievement gap. In turn, the illustrious reputation of elite high schools comes with a reputation of sparse diversity, this remains one of their biggest critiques.

“When I came to Stuy I was surprised,” said Stuyvesant junior Samantha Farrow, who is Black. “There was no one coming up to my face and calling me the N-word or being blatantly anti-Black. As time went on, I noticed that there are definitely anti-Black sentiments at play at Stuy, but they operate so lowkey.”

Some of the anti-Black sentiments that Farrow refers to, range from comments about her appearance and demeanor to asides referring to Black students as “others.” Due to her race, she feels denied of simple joys like high school dating or romantic crushes. Trivial as it may seem, she says that “when you are a high schooler, petty things like this matter.”

These woes do not reflect the experiences of all Black and Latinx students across the specialized high schools. For Brooklyn Technical High School (BTHS) junior Opeyemi Omoboye, who is Nigerian, race feels like no object.

“I don’t feel like being Black changed the way I was treated,” Omoboye said. “When I first came to Brooklyn Tech, I was the only Black girl in most of my classes but all of my teachers were nice and always supported me.”

Compared to other specialized high schools, BTHS admits more Black and Latinx students on average, with these groups making up 12.9 percent of its student population. Still, White and Asian students represent the majority at all eight schools, but it wasn’t always this way.

“Back in the day, Brooklyn Tech was a very diverse school,” said Horace H. Davis, a BTHS Alumni and board member for the school’s Alumni Foundation. “Demographics was just not something that was relevant. When you attended the school, other children from your middle school, from your borough, from your community, were represented in the schools”

In 1984, Davis’s graduation year, Black and Latinx students made up 59% of the BTHS student body; he noted a strong presence of Caribbean students like him. Along with demographic shifts, Davis believes that the quality of education among New York City’s public schools has deteriorated.

“The public schools [back then] were at a higher level,” Davis said. “Students were placed in grades or classes in their grades based on performance. So, the teachers could really meet the students where they were.”

Davis also cited accelerated learning programs for high-performing students, as a success of the city’s public schools in the ‘80s and ‘90s. Now, these programs are being eliminated and redesigned by soon-to-be-former Mayor Bill de Blasio. The SHSAT could be next on the chopping block, with claims that it’s inequitable for students from underfunded schools. While the city’s government is moving forward, not everyone is on board with the plan.

“I feel that eliminating the test is the wrong thing to do,” Davis said. “As far as other criteria that would be considered outside of the test, I think that’s one of the problems. What are the other things that you can do to assess a student and their preparation, and be fair about it?”

Researchers would say that Davis is somewhat correct.

“While there is a clear need to improve access for under-represented groups, our analyses suggest that a narrow focus on the SHSAT is largely misguided,” NYU’s Research Alliance for New York City Schools reported, in its policy brief. “The SHSAT does appear to be a barrier to diversity in the specialized high schools, but our analysis of the pathway into these schools suggests that there are opportunities for increasing diversity, even within the confines of SHSAT-based admissions.”

Another point of debate is the value of specialized high schools. NYU researcher Sean Cocoran, who worked on the study, told The Atlantic that “prestige is hard to quantify” and that the presence of selective schools creates “a perception that there’s a small number of schools that are worth going to while the others aren’t so great.”

This perception of prestige that Cocoran mentions is something that educational justice advocate and Brooklyn Technical High School alum Tajh Sutton, sees as pressure for students of color when it comes to selecting which high school to attend.

“In my experience, I realized that the resources available really weren’t worth a lot of the trauma that we were experiencing as Black and Latino youth in these spaces,” said Sutton, the Programs Manager for Teens Take Charge. “I think a lot of young people, particularly young people of color, we get that story that says these are the schools that you have to go to to be successful. And so we buy into that, and we plan our lives around that, but there’s more to education.”

Eliminating the state-mandated test that has stood since 1972 brings these specialized high schools into uncharted territory. Its proposed removal has prompted Sutton, who is also the president for Community Education in the city’s council district 14, to reimagine admissions criteria. For her, it’s simple: putting students’ interests first.

“We often categorize children and track them in one place throughout their educational careers,” Sutton said. “Just asking kids what they’d like, what their education would look like, if they were in control of that, I think we’d find we have a lot more kids who are enthusiastic about things.”

NYU researchers’ promising solutions for increasing diversity include ensuring that more Black, Latinx and low-income students take the SHSAT by providing ample preparation resources, or implementing the “Top 10% Rule,” which grants each middle school’s top students, admission to specialized high schools. It’s unclear if these changes will be put into practice any time soon, but NYU’s researchers say that “addressing this challenge will likely take years, more knowledge, and a much greater commitment of resources.”

The students—Arlette Duran, Samantha Farrow and Opeyemi Omoboye—are nearing the end of their time at the specialized high schools. For students to come, the path to educational equity continues to be riddled with uncertainty.