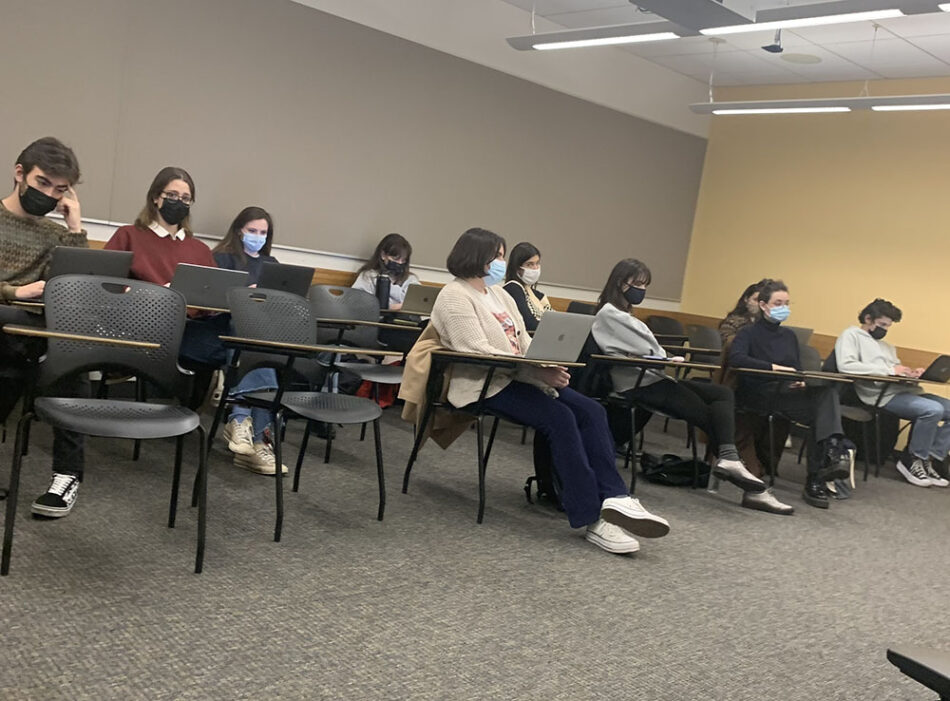 Kayla Thompson’s NYU English thesis class. She is the only Black student. Photo by Sanya Khurana

When Kayla Thompson, a Black student majoring in English Literature at NYU, started college in the fall of 2018, she expected the classrooms to be very diverse, especially since NYU markets itself as a highly diverse and inclusive university. But that’s not what happened. In most of her classes she was the only Black student.

In her English Honors Thesis class she is the only Black student who made the cut.

“It’s so upsetting, because I know there were some other really smart Black students who were interested in writing a thesis too, and like I know the process in very selective and this may not be intentional, but somehow it’s only the white students who were given the chance to be enrolled,” Thompson said. “Like it’s already so disappointing that all my classes are dominated by white people, and this is just like the cherry on top.”

Thompson is just one of the many Black students at NYU who finds that there is a problem with racial representation, in spite of the fact that NYU claims to have committed itself to building diversity, inclusion and equity. Every year, NYU states that it has exceeded its diversity rate from the previous years, having admitted its most diverse class, with African American students representing 12 percent and Latinx students representing 22 percent of the undergraduate students accepted this year. In spite of this, the largest percent of its students and faculty members remains white, and students like Thompson feel like they aren’t able to experience the diverse and inclusive space that NYU claims to have created.

“I literally enter my classes, and each time I think in my head that where are they all? It’s so problematic and so frustrating,” Thompson said.

The diversity differs among different schools at NYU, with a higher rate of diversity at Tandon, which makes up 7.14 percent of the 12 percent Black undergraduate students admitted, as compared to the other schools.

“I have classes at both Tandon and CAS, so I can clearly see the difference. At CAS it’s like a lottery system or a chance meeting if you even find one other Black person in your class, but at Tandon I always find at least one or two other Black students in each class,” Josiah Jones, another Black student at NYU said. “That’s not a lot, but at least it’s something.”

In response, NYU has an entire team in the Office of Global Inclusion, Diversity and Strategic Innovation, that works towards mitigating racism and microaggressions and increasing diversity and inclusion. They set policies against racism, they prepare toolkits and resources on trans-inclusive practices and anti-racism, they have programs on anti-racism education, and they plan social events organized around the aim of achieving diversity and inclusion.

But for some students it’s not enough.

“I think NYU wants to be diverse, they are aspiring to be diverse and inclusive, but they just don’t have the right resources to be all of that right now,” Reed said. “It almost feels like they want something but don’t know how to achieve it, they kind of remind me of a naïve child that way.”

Jones, who previously attended New Kent High School in Connecticut, which is a predominantly white school, said he didn’t expect to come across microaggressions at NYU the way he did at high school. But that’s not what happened.

“Surprisingly, in terms of being respectful, there wasn’t much of a noticeable difference in the classrooms at NYU and my high school, like I’ve met way too many people here who are just as bad as the people I went to high school with” Jones said. “It’s not really overtly hostile stuff, but some people ask me what made me as a Black guy choose to come here and educate myself, almost like I’m supposed to have some backstory to explain myself, some of them just look at me with this really subtle disgust as if they don’t want to interact with me.”

Thompson said that she was forced to change her thesis topic about Black authors because she didn’t have enough support from the faculty members.

“The English department is mainly dominated by white students and professors, and so when I wanted to focus on texts by Black authors in my thesis, I didn’t have enough resources. Like I couldn’t get a Black professor who is invested in the topic to be my thesis advisor,” Thompson said. “Now I’m focusing on Virginia Woolf for my thesis, I don’t have any option.”

“I lived in Rubin Hall in my freshman year, which is a low-cost dorm, and almost everyone there was Black or Hispanic, so naturally those are the friends I have today, like I’m not friends with a single white or Asian student. And it almost feels like NYU facilitated this segregation in a way because I know there are low income white students here too, and none of them were put up in Rubin,” Reed said. “Weirdly, now that I’m an RA, I see the same thing repeating with new students too, like people with similar racial backgrounds are usually put in the same room.”

Jones said he experienced backlash from NYU when he and some other members at the National Society of Black Students Engineering of NYU were trying to facilitate an event for Black students to meet students of other races.

According to a study by Hallinan and Williams et al, there are major benefits that students receive from interracial friendships, which can’t be received by having only same race friendships. These include greater social competence, higher educational aspirations, improved academic performances, higher cultural awareness and a greater scale of confidence.

“Like literally, what is a diverse school if you’re not having a shared and inclusive experience, like so much of our learning experience gets stolen from us just by the fact that we’re not bouncing off ideas among interracial friend groups,” Reed said. “And think of it, if we would have an integrated experience as students, it would be so beneficial for us when we would work in different kinds of racial settings later in life.”