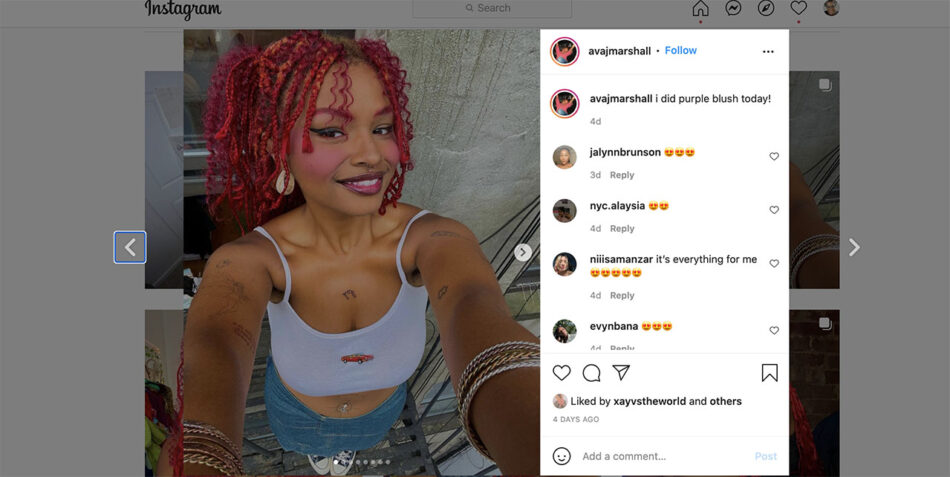 One look at activist and poet Ava Marshall’s Instagram account makes a few things clear. Her affinity for brilliant colors and body art. The limitless options of hairstyles available to Black folks. The joy and radiance of Black femininity in each post, a mere glimpse into Marshall’s world—but last year, the 20-year-old’s world was anything but bright.

“We always recognize and see how Black death is a part of our society, and it’s something that we’re desensitized to,” said Marshall, a third-year student at New York University. “It seemed like everyone was all of a sudden, caring.”

She’s referencing the summer of 2020 and global outrage following the killings of many Black Americans at the hands of law enforcement. This period prompted an awakening, where some individuals unpacked racism for the first time. Despite society’s new cultural competency, not much changed for Black people.

“It was this feeling of being super visible, but no one’s really having care for me or recognizing how this moment was for so many black people,” Marshall said.

This torrent of emotions evolved into “Philosophy,” a poem about the value of Black life, that earned 27.6k views when performed on Marshall’s Instagram page, and a feature from NowThis News. The poem came with no intention of acclaim, instead, it was a means of survival— a release.

“What the poem was, was just me being upset,” Marshall said. “It took a life of its own, which is crazy.”

Such is the case of many movements that gain traction on social media; nearly instantaneously they explode into an entity. In the past five years, youth activism has done the same.

“It’s really important for young people to understand that they have rights, and how to exercise them in various situations,” said Kenny Nguyen, youth programs manager for the ACLU of New York’s Education Policy Center. “They do have a voice, and what they’re experiencing does matter.”

The saturated online market for activists can be intimidating, but as a community broadens, so does the consideration of what an activist can be and achieve.

“Being an activist really is dependent on who you know, your network, your community,” Nguyen said. “It’s just about doing what you can and gaining the skills from that. Realizing that every single action or thing that you do when it comes to activism, you’re gaining a skill.”

Marshall sees beyond political action as the sole component of activism, now she’s focused on cultivating community and what she calls “the imagination.” She explores this in a path of study that she devised “poetry, prose and community organizing.” Whether she’s mobilizing the fellows of the Homegirl Project or planning her newest outfit, her activism is inspired by a desire to be utterly herself.

“I love to be loud,” Marshall said. “My presence is to be disrupting the things that be, or taking up space, being loud and bright, and kind of just demanding attention in that way.”

Ava Marshall’s rebellion is as vivid as her candy-colored, red braids. Her liberation resides in the hobbies she pursues; in the feeling of music tantalizing the body, as she dances on video for her Instagram story. It lives in vinyasa yoga flows and deep, intentional breaths. No matter what space she occupies, Marshall encourages others to come as they are when it comes to activism. She is vying for a different kind of radical revolution, one of jubilation. One where self-care can be the most liberatory. That’s her philosophy.