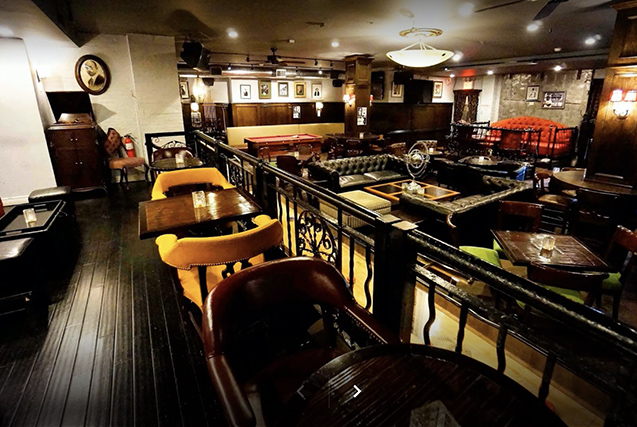 Bedford Manor Restaurant in Bedford Stuyvesant, Brooklyn, may not survive the pandemic.

Bedford Manor, a popular bar and restaurant located in Brooklyn’s BedStuy neighborhood, only has a month or two left. With leather chairs, a hidden room behind a bookcase, and red velvet curtains, the popular spot has had a successful run since 2010, but might soon join the growing list of restaurants that close for good due to the coronavirus outbreak.

The three-month shutdown and precipitous fall in revenue have clobbered the business, which before the pandemic averaged around $100,000 in sales each month.

“The money I am making now is 8% of what I was making before the pandemic,” said owner James Daniel, who reopened his once-thriving restaurant two weeks ago.

Social distancing efforts have devastated New York City’s restaurant industry but the crisis is just beginning. Outdoor dining reopens on Monday with the start of Phase 2, but experts still expect to see a wave of closures in the coming months as government aid efforts fail to meet the needs of these businesses.

Two-thirds of restaurant owners said in a survey that they would need a 70 % occupancy rate in order to reopen and survive, according to the non-profit NYC Hospitality Alliance.

It’s the smaller, independent eateries that are suffering the most. Local bars and restaurants lack the financing options available to large chains that can tap bank loans and investors for more cash.

In April, the federal government introduced a $349 billion forgivable loan package called the Paycheck Protection Program to give “mom and pop” shops emergency funds. But less than 20% of requests by small businesses were approved in New York state by May, according to a report by the Federal Reserve Bank of New York.

But even those that do receive the money find it coming up short.

Daniel said he received a $25,000 loan for Bedford Manor under the PPP, and a $10,000 loan from the Small Business Administration.

Daniel had 13 employees before the pandemic and now has only two.

Bedford Manor isn’t alone. New York City has about 26,000 restaurants that employed 169,000 people through February, but employment has since fallen to only 21,000 in April.

Laura Gemelli, 36, lost her job at ilili Restaurant in Flatiron after it halted operations in March.

“I am surviving on my unemployment benefit, but how long? The restaurant won’t hire in full capacity when they have no customers,” Gemelli said.

Some restaurant advocacy groups like Independent Restaurant Coalition are pushing Congress to sign a new $120 billion relief package to salvage the industry. The National Restaurant Association, a powerful lobbying group, has called for Congress to provide $240 billion in urgent relief directly to restaurants.

“The government must give another package,” Daniel said, adding that he is afraid customers won’t return due to fear of the virus.

Fred Jackson, the manager at Mo’s Fort Greene, bar and lounge in Brooklyn, said he applied for a PPP loan but never received any funds. He hopes that when outdoor dining reopens on Monday, enough customers will return to bring the business back to life.

“If they don’t come, we can’t survive for more than three months,” Jackson said.