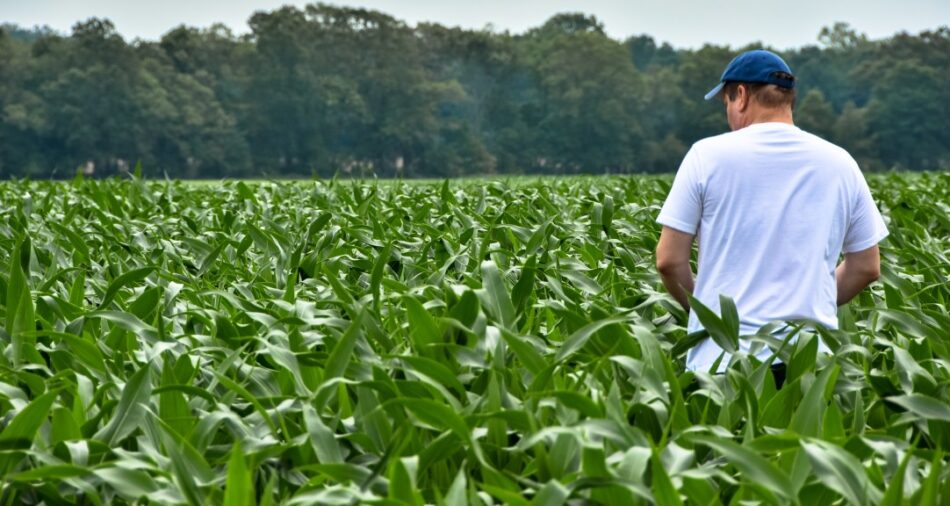 A farmer in white shirt stands in a corn field. Photo by @olderwise1 via Twenty20

The striking dichotomy of America’s current food supply: rivers of milk flowing to waste, livestock and produce being destroyed in alarming numbers, at the same time thousands   of people are joining food lines.

The world’s richest nation grows more food than its citizens can consume, but now struggles to get all that food through the vital supply lines leading to their tables.

Instead, the unprocessed food is being dumped, smashed, depopulated or “humanely euthanized” in quantities not seen since the Great Depression.

The Covid-19 pandemic has sent the country spiraling down to a new normal. Many states are under stay-at-home orders and most businesses are on lockdown. The resulting mass unemployment and growing food insecurity, highlight the dependence on a fragile, if efficient, food supply system.

This supply chain was designed largely using the precise just-in-time management system, which focuses on moving supplies only as needed, with minimal storage and reduced costs as its benefits.

But the pandemic has exposed flaws in this system. It is no longer working smoothly.

“The food supply chain is breaking,” Tyson Foods chairman, John Tyson, said in a recent blog post regarding the operational challenges large food providers were having.

Staff shortages from sickened workers have compounded the initial problem of the sudden drop in commercial demand for fresh vegetables, meat and dairy from large farms.

Restaurants, hotels and schools were some of their biggest customers, and with their closing, there were no quick pivots to process massive amounts of food into smaller, consumer-ready packaging.

These mega farms are operating at a loss, as they are forced to continue destroying livestock and crops they cannot sell.

Many grocers scramble to keep their store shelves stocked to meet increased demand from shoppers stuck at home.  And many newly jobless Americans are lining up, often for hours at a time, at food banks.

This unforeseen food waste catastrophe could have possibly been mitigated with a more decentralized food supply system.  A vast local network of farms, scattered across the country, could better handle individual crises than the limited group of farming monopolies that now exist.

Over the last 30 years, more and more farms and meat processing plants were consolidated. Currently, about 50 factories process more than 95 percent of the nation’s beef supply.

The raw milk industry is dominated by several large companies, who distribute their supply on a regimented distribution system that cracked under speed and scope of the pandemic.

The glaring contrast of food waste and want has caught the nation’s attention.

In response, President Donald Trump recently announced a  $19 billion relief package to shore up farmers and purchase their excess products.

Secretary of Agriculture, Sonny Perdue, said President Trump and the US Department of Agriculture were “standing with farmers, ranchers, and all citizens to make sure they were taken care of.”

Up to $3 billion of the relief package was allotted to purchase fruits, vegetables, dairy and meats to be distributed to food banks and other community organizations nationwide.

In New York, Gov. Andrew Cuomo, speaking at a press conference, also addressed the disconnect between food on farms that were not getting to the people who needed help most.

“This is just a total waste to me,” Cuomo said. “We have people downstate who need food and farmers upstate who can’t sell their product.”

The governor’s solution is to create a $25 million Nourish New York initiative where food banks throughout the state purchase food from upstate farmers and redistribute it to locations with need.

In East Elmhurst, Queens, one of the New York neighborhoods hardest hit by the pandemic, the first van loads of produce arrived on Friday, producing much needed relief to those waiting in line.

The distributions will continue every Friday and Saturday at 11 a.m. as long as needed.

Meanwhile, some farms and related co-ops are donating food directly to food banks to help stem the amount of food being discarded.

The Dairy Farmers of America co-op has sent over a quarter million gallons of milk that would have otherwise been dumped to food banks.

“It’s just a drop in the bucket,” one senior executive, Jackie Klippenstein, said in a recent New York Times article regarding the donation. “But we had to do something.”