Harry Potter and the Magical Malady of the Movies 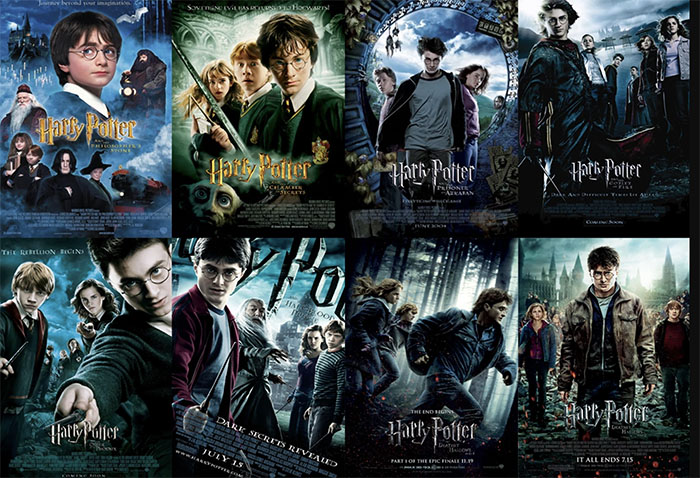 Like most everyone in the world (as is mandated, recommended, possibly bemoaned), this particular writer has been home quarantining for a month now. Yes, yes, I know, public health and safety and all matters, but it is a bit of a bore.

So I decided to do a marathon of one of my favorite movie franchises of all time: Lord of The Ri- no, lord no. I mean the “Harry Potter” movies.

I’m part of “generation HP,” the era of kids who grew up watching the movies as their first introduction to the franchise rather than reading the books. I first started with the first three movies as a youngin’ of nine, then read books two through seven long after they came out, watched movie eight, read book one, and then finally concluded with movies four through seven (if you kept up with that tale, well done!). But it’s been quite the hot minute since I’ve taken a few hours (days, more like it) to sit down and watch all eight movies, which I remember as being the gold standards of filmmaking.

Let’s just say, the charm’s (see what I did there?) still there, but maybe the effect’s starting to fade. But let me tell you why you should spend your quarantine watching these movies.

A friend of mine recently described the movies as being “the truest escapism.” And that’s exactly the kind of thing we need to keep ourselves sane during this time. There’s a pure childlike wonder that comes with immersing yourself into the world of Harry James Potter. The movies offer a truly sensory and encapsulating experience. Dare I say, they’re… magical?

The HP film franchise is a true feat of production and cinematography, creating works of film that are just as impressive nearly two decades down the line (feel old yet?). The detailed work on the set pieces, first rate visual effects, and CGI, all make for a visually stunning piece of cinema. Honorable mention to the John Williams scoring as well, iconic in its own right.

The movies truly come together due to the impeccable, IMPECCABLE casting. Having Emma Watson, an actress with a slight air of perfectionism, play Hermione Granger makes her an insufferable know-it-all that you can’t help but root for. Evanna Lynch’s dreamy airhead look makes Luna Lovegood all the more endearing. Helena Bonham-Carter’s truly kooky demeanor is what makes Bellatrix Lestrange feel like a real threat. Even Daniel Radcliffe so easily captures the sort of boyish charm that Harry Potter has without making it too obvious (I’ll give him a pass for missing the green eyes).

Keeping that in mind, though, have you ever met one of those people who always go “umm, the book was better than the movie?” In this case, they’re right. You can argue it, but you’d probably be wrong. Every one of the books (except for book three, “The Prisoner of Azkaban”) was a story-telling marvel that I don’t think the movies could be. The books never overwhelmed us with characters or new developments in the wizarding world, yet managed to keep the storyline moving forward at a brisk pace. And the characters and plot points started to get more and more compelling and seemed to all connect.

In movie five, “Order of the Phoenix”, Sirius Black says, “The world isn’t split into good people and death eaters. There’s a light and dark inside all of us.” But, the thing is, most of the characters in the HP universe can quite conveniently be slotted into “good” or “bad” terms. It can be quite binary. Obviously, there are notable exceptions, like Harry himself, being both brash and intuitive; Severus Snape, loyal yet sardonic; even Ron Weasley, probably the most realistic character, who showcases that being adjacent to fame instead of actually famous isn’t as thrilling.

But that’s just what they are. Exceptions. And the movies make that very apparent, simply because there’s not enough time to explore each and every one of these characters. In the fourth movie, “The Goblet of Fire,” Triwizard champion Viktor Krum comes off as being arrogant and ruggedly handsome. That’s because he barely has any lines beyond grunting like a lunk from the stone age (petition to retroactively fire the actor, Stanislav Ianevski, for turning him into a plank of wood). In the books, however, he’s depicted as being arrogant, ruggedly handsome, secretly charming, awkwardly endearing, and a pretty decent chap. The screenplay often shows you everything that’s going on but shies away from going deeper lest it dive too much and run out of time.

My personal biggest critique would be the movie’s half-baked storylines that, fundamentally, seek to simply bring plots from the paper to film reel. Take, for instance, Ron Weasley and Lavender Brown’s hurricane of a romance in book six, “The Half-Blood Prince.” Lavender Brown had been a constantly recurring character throughout the books, albeit one of little significance. But when she develops a relationship with Ron (a cringeworthy one at that), it feels like an organic arc that brings a consistently cute background character to the forefront. In the movies, however, it just comes straight out of nowhere. Lavender makes her very first meaningful (and whitewashed) appearance in that movie itself and presents less as a “silly girl in love” and more “stalker with an obsessive infatuation.” It all seems too contrived and doesn’t come quite as naturally as it does in the books. #JusticeForLavenderBrown

Also, I consider it a heinous offence that the movies largely forget that the Patil sisters belong to different houses, often showing them both together in the Gryffindor common room, despite one being in Ravenclaw. As a fellow Indian, I demand accurate depiction!

Why do all of these problems matter, though?

People tend to get caught up in the overflowing emotion that the movies bring out, which is why they don’t really see what’s wrong with them. These nitpicks are only here because they could potentially take you away from the escapist element of the films, make you take a step back and, God forbid, remember what’s going on in the outside world. I’d call these disclaimers, maybe. A warning for things to look out for, perhaps.

However, the Harry Potter movies set box offices on fire and turned tomatoes “fresh” for more than a decade for good reason. It almostperfectly put to screen all the images we had in our heads and gave us some of the most memorable movie moments of recent times. Heck, cue Hedwig’s Theme (that familiar piano tune you hear at the beginning of each movie, for all you muggles) and that alone can elicit sighs, probably tears.

There’s something to be said for a series of films that take you on a journey quite like these do. Even if it is a journey of debate, it’s still better than sitting alone and going, “this disease will kill us all, farewell cruel world.”

Side note: would the Coronavirus have been a problem in the wizarding world? Nah, it’d probably be gone with one spell. That’s the reality we’d rather all be living in, as one collective community of Potterheads. And with JK Rowling launching the Hogwarts at Home hub to (slightly) experience some of the magic of wizardry, that might be more possible than you’d think.

Best movie: “Harry Potter and the Philosopher’s Stone” for achieving everything it set out to achieve and then some

Worst movie: “Harry Potter and the Prisoner of Azkaban,” which is, quite frankly, unmemorable and driven by the most stale of the seven books. I almost screamed when I realized Alfonso Cuaron, he of “Y Tu Mama Tambien” fame, helmed this movie. Also, having the characters in street clothes, escandalo!

Best character: While Ron Weasley’s complex and realistic character sketch takes it in the books, I’d have to give it to Hermione Granger in this case, simply for Emma Watson’s fantastically exuberant portrayal (she made being a nerd “cool”)

Worst character: Michael Gambon’s Albus Dumbledore (aka the second one) for playing way too panicky, a stark contrast to the composed figure from the books

On that note, let’s end with some of the biggest cues the movies unconsciously made, in my mind, to our present scenario. A checklist, if you will:

Now excuse me while I go check my mailbox…

Tsk, my Hogwarts letter is now 11 years and 257 days late, that owl better not be social distancing right now!