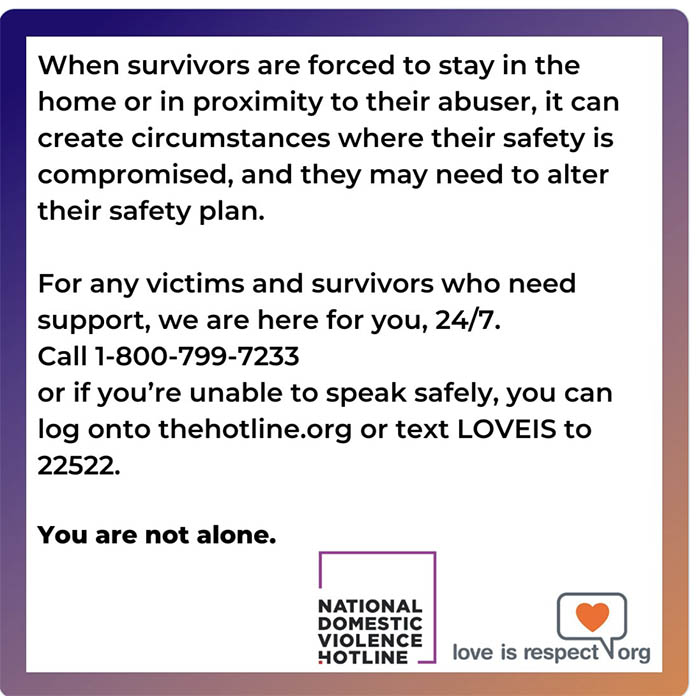 As Puerto Rico tries to curb the spread of the coronavirus, the island’s population has been placed under lockdown, forcing residents to stay home until March 30. But home isn’t safe for everyone.

For women who are experiencing gender-based violence, a mandatory lockdown traps them with their abusers, giving them less opportunities to escape physical and verbal abuse.

“The home, if you have to share it with your abuser, turns into a place of risk,” said Vilma González, executive director at Coordinadora Paz para las Mujeres, a coalition against domestic violence and sexual abuse. “Most women in Puerto Rico die in their homes.”

In Puerto Rico, 65 percent of femicides in 2018 ocurred in the victim’s residence, the abuser’s or in a house they both shared. Last year, at least 10 women were murdered by an intimate partner or ex-partner, according to Puerto Rico’s Police Bureau.

More than 30 organizations led by Coordinadora Paz para las Mujeres on Tuesday demanded Governor Wanda Vázquez Garced take concrete actions to address gender-based violence during the pandemic. In a letter addressed to Vázquez Garced, who was head of the island’s Office of the Procurator for Women, the groups urged her to recognize shelters for domestic violence victims as essential services, define how the government will administer Covid-19 tests in shelters, guarantee shelters will have access to cleaning products, and divulge government agencies’ plans to protect victims.

González said abusers could take advantage of social distancing measures to exert further control over women and their children. She said the pandemic provokes stressors that tend to trigger violence.

“Under mandatory quarantine, the risks increase because we have more stressors,” González said. “Women are facing difficulties with their jobs or their partners are facing economic concerns, plus children are in the home. One stressful situation is being added over another and another.”

Globally, one in three women experience physical or sexual violence, according to the World Health Organization. But during times of humanitarian emergencies, the risk of gender-based violence grows due to increased stress and feelings of powerlessness, scarcity of basic provisions and destruction of social networks.

In China, activists say domestic violence cases rose dramatically during the enforced lockdown meant to contain the spread of the coronavirus. The founder of an anti-domestic violence nonprofit located in the Hubei province, the epicenter of the virus in China, said reports of domestic violence have nearly doubled since cities were put under lockdown.

González said the spike in cases of violence against women in China should serve as a warning for other countries to take preventive measures so “no one has to die because of domestic violence.”

On Monday, a woman was killed by her ex-partner in a psychologist’s office in Aguada, a town in the western region of the island. The man died by suicide.

Vázquez Garced issued an executive order on Sunday to impose a curfew from 9 p.m. to 5 a.m. until March 30 to slow the spread of the coronavirus in Puerto Rico, where there are eight confirmed cases of Covid-19, the disease caused by the novel virus. The governor also ordered a two-week closure of non-essential businesses, excluding supermarkets, pharmacies, banks and gas stations.

He said the government has failed to implement plans to address the social problems caused by the measures taken during emergencies. Alicea-Rodríguez pointed out that Spain’s Ministry of Equality, for example, promoted resources to minimize the risk of assaults during the country’s lockdown.

“These things are foreseeable,” Alicea-Rodríguez said. “At a macro-policy level, there is no social policy system that guarantees the continuation of essential social services, and one of them is the protection of victims.”

The Office of the Procurator for Women, a government institution dedicated to advocating for women’s rights, said on Tuesday its confidential hotline will continue operating 24 hours a day and seven days a week. Madeline Bermúdez, interim head of the agency, said the office will also provide counseling, and psychological and legal aid.

For social psychologist Mercedes Rodríguez, gender-based violence is usually absent from public discussions when addressing a crisis. She recalled the island experienced a similar situation after Hurricanes Irma and Maria in 2017.

“After the hurricanes, the crisis situation was terrible,” Rodríguez said. “There were less police officers, they weren’t answering calls. The chaos prevented victims from getting access to the justice they’re entitled to.”

Organizations reported an increase in violence against women after Hurricane Maria ravaged the island. More than two years after the hurricanes, the government lacks protocols to aid women who experience gender-based violence during an emergency.

Rodríguez said domestic violence shelters are usually not on the government’s radar during crises and are provided little to no resources. During the outbreak, she added, shelters should be guaranteed access to essential supplies, considering several women and children are sharing a limited space and have nowhere else to go.

Casa Protegida Julia de Burgos, the first domestic violence shelter established in Puerto Rico, has taken new precautions against the coronavirus. Lawyer Olga López-Báez, chair of the shelter’s board of directors, said they are screening new arrivals and will follow recommended guidelines if someone presents symptoms.

López-Báez said nonprofits like Casa Protegida Julia de Burgos, opened 40 years ago, have stepped up to provide services to women who are experiencing gender-based violence in the face of the government’s inaction.

“Just like Covid-19, domestic violence is a matter of high priority and it is a matter of public health,” López-Báez said. “We see an absence of policies that comprehensively respond to this social evil.”

Since 2018, women’s rights advocates in Puerto Rico have demanded the government to declare a state of emergency because of gender-based violence. Between 2014 and 2018, 266 women were murdered in Puerto Rico, or one every seven days, according to a report by anti-police brutality organization Kilómreto Cero and feminist group Proyecto Matria.

López-Báez advised women who are experiencing gender-based violence to contact organizations during the lockdown via social media or over the phone. The shelter offers orientation through several hotlines in different areas of the island.

Hogar Ruth, a domestic violence service shelter, has been offering some services remotely. Lisdell Flores, the shelter’s director, said lawyers are on-call 24 hours a day and seven days a week to provide aid and the shelter’s doors will remain open during the pandemic.

“The shelter is still operating,” said Flores. “It’s a space we can’t shut down. We habilitated an isolated space just in case we receive someone who was exposed to the virus.”

Flores said the shelter has been able to buy cleaning supplies, but is worried a total closure of stores could limit access to basic necessities. She said categorizing domestic violence shelters as essential services would be vital to continue doing work.

“We are the only therapeutic service provider in the east that is free of cost,” said Inoa Monegro, who has been with Taller Salud for 10 years. “We were concerned that all 24/7  services be accumulated or directed from San Juan. We are trying to be part of this collective effort in the area as an organization that adressess violence against women.”

Inoa Monegro said staff has been working remotely. She added that the organization’s personnel and psychologists have been checking-in via telephone with women who receive services from Taller Salud and have gone through the women’s security plans and making sure they have enough supplies for two weeks.

The advocates urged domestic violence victims to elaborate security plans, maintain a support system and reach out to organizations that service women who have survived violence or abuse. Their message to women experiencing gender-based violence: You are not alone.

If you or someone you know is experiencing domestic violence, contact any of the following resources:

You can download  a directory  compiled by Coordinadora Paz para las Mujeres that includes organizations and government agencies that will service women who are experiencing gender-based violence during the lockdown.